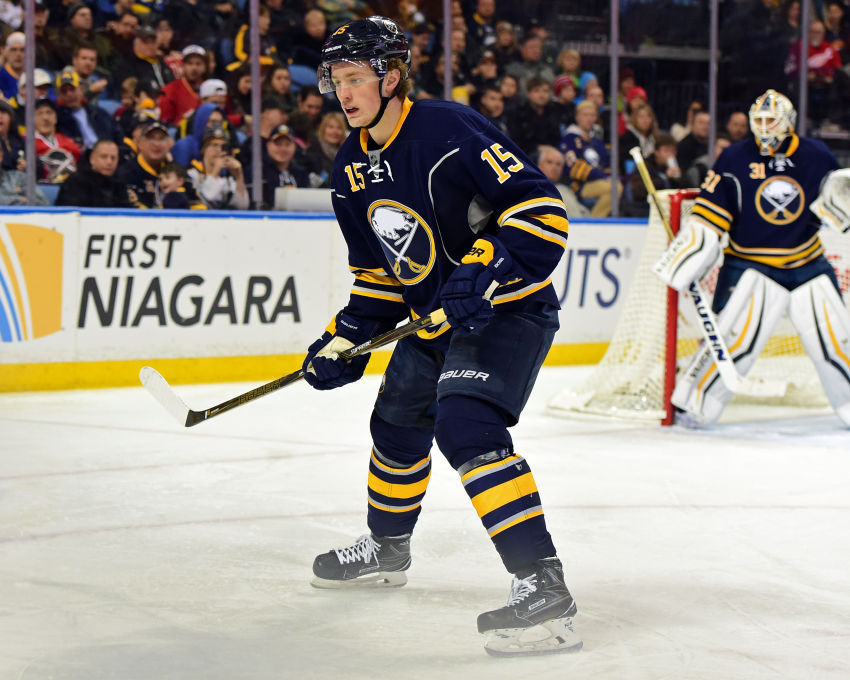 Jack Eichel has been on a tear recently. ©2015, Dan Hickling, Olean Times Herald

BUFFALO – When the Sabres hatched their grand rebuild plan and sacrificed two seasons for future glory, they envisioned performances like youngsters Jack Eichel and Sam Reinhart gave in Saturday afternoon’s 4-3 loss to the Detroit Red Wings.

With the Sabres down 2-0, Eichel scored two slick goals – a nifty power-play score and a breakaway – in a span of 3:01 in the second period, igniting the capacity crowd of 19,070 fans inside the First Niagara Center. Then Reinhart’s power-play goal tied it again after they fell behind late.

So far, almost halfway through their rookie seasons, Eichel and Reinhart are developing as the team had hoped. The last two No. 2 picks, the Sabres’ rewards for fielding terrible teams, are already big contributors.

Eichel has morphed into a star center in the last seven games, compiling four goals and 11 points. He had a hand in seven straight Sabres goals before Reinhart scored. He tied Detroit’s Dylan Larkin on Saturday for the rookie goal lead with 13.

Reinhart, meanwhile, has nine goals and has become a first-line right winger.

But owning two of the game’s top young talents hasn’t dramatically changed the Sabres’ fortunes this season. They’ve lost four straight games, rank 29th overall in the NHL and are mired in last place in the Atlantic Division.

Sure, the Sabres are a much better team than the past two years. They’re competitive, play with a purpose and show signs of progress. They have 13 one-goal losses.

Still, they haven’t been able to budge from the bottom of the league. They lead the league with 12 home regulation losses and 14 overall. The season has quickly become a huge disappointment.

“We felt like with some victories, adding points, we’d be right in the mix with the teams that are contending, with the Detroit Red Wings, (who) are in a playoff spot right now,” he said. “ … Having lost four in a row now, now you’re looking up at the distance of 11 points (behind Detroit).

“It’s a lot different feeling. With the way this team’s played, with how hard we’ve played, I am a little bit shocked that where we’re at. That’s the difficult part, you do fight back, you do get back to even and we give up a goal late in the game that is the deciding factor.”

Sabres defenseman Zach Bogosian, who was on the ice for Tomas Tatar’s winner with 2:50 left, believes “everyone needs to looks into the mirror.”

“Whether they’re open about it or not, as a team we have to be better,” said Bogosian, who missed a breakaway after Tatar scored.

Defenseman Josh Gorges doesn’t want to Sabres to focus on their record.

“We can’t focus on what’s happened up until now,” he said. “As frustrating as it is right now, these last couple games … we’ve got to find a way to get ourselves out of this little funk, get an ugly win and just get back on track.”

The silver lining, of course, is how close the Sabres have been in so many games. A break or a better shift here or there, and their fortunes could be dramatically different.

“I think in a number of situations we’re right there,” Bylsma said.

The Sabres were right there against the Wings. After Brad Richards and Riley Sheahan scored, Eichel wired a wicked wrist shot from the right circle past goalie Petr Mrazek at 14:26. Eichek zoomed in and tucked a shot past Mrazek’s left pad at 17:27.

After Henrik Zetterberg scored 2:27 into the third period, Reinhart tied it at 8:58.

Then Tatar beat Sabres goalie Chad Johnson from high in the slot.

“It’s a tough one to swallow,” Eichel said.

Reinhart added: “Good teams find a way to win. If we want to be one of them, we’re going to have to find ways to win in situations like that. We can learn a lot from a team like that with a lot of experience.”