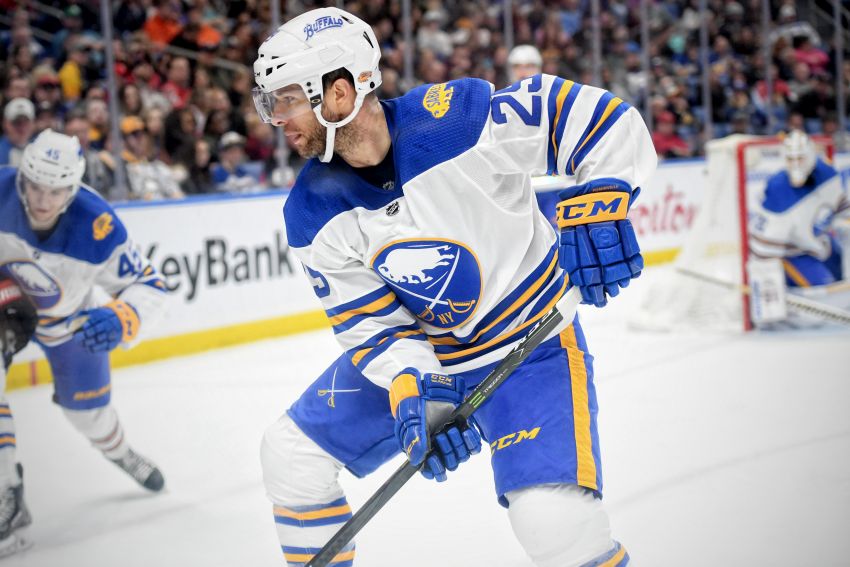 BUFFALO – Jason Pominville looked stunned. Mercifully, the Sabres closed out their home schedule Wednesday, and the finality of the most disappointing season in franchise history hit the veteran winger hard.

“I don’t think anyone really coming in envisioned this,” Pominville said after a 4-2 loss to the hapless Ottawa Senators secured the Sabres 31st place. “Certainly not myself, being on the outside coming in and hoping we’d be headed in the right direction.

“And sometimes we are, but for the most part we’re not. We take steps forward and then we take a couple back.”

The Sabres have finished dead last three times in the last five seasons.

When the NHL holds its draft lottery April 28, the Sabres will have the highest odds at the No. 1 overall pick – just 18.5 percent – and the right to pick Swedish defenseman Rasmus Dahlin.

The Sabres went out with a whimper Wednesday, falling apart after center Ryan O’Reilly scored 30 seconds into the game.

Nine months ago, Phil Housley’s hire as coach and Jason Botterill’s arrival as general manager energized the organization and fan base.

While a playoff spot this season seemed iffy, the Sabres were supposed to improve and showcase a fast, exciting style. They would make strides and set the table for future years.

In the end, they regressed mightily. They’re 25-43-12 with only 61 points entering their two final road games. They rank 31st in scoring and 29th in goals allowed.

“We had injuries and stuff like that, but with the group we have, I still don’t believe we should be where we’re at,” Housley said. “But we are there, and things got to change.”

O’Reilly said: “You can expect all you want, it comes down to doing it and getting better. Obviously, we got worse.”

“I believe in our system, I believe in our structure, I believe we do play a brand of game that’s the right way – we’re on top of people, we’re not cheating the game and we’re doing things for the better part of the team, you can see we’re a good hockey team,” Housley said. “This is just where we are as a group. Let’s be honest, we have a long way to go.”

The Sabres, of course, will never go anywhere if they don’t start winning at home. On Wednesday morning, Housley spoke passionately about the team’s fans and thanked them for their passion and support.

Hours later, they lost for the 30th time at home.

“It’s disappointing,” Housley said following the game. “You get the start you want and we think it’s going to be an easy game, and they start to come out and check hard, guys are beating us up the ice. I just think we didn’t have enough investment from our players, particularly it being the last home game. We needed to be better, we needed to give more to our fans, and by the time we get a push it’s too late.

Pominville said after the Sabres grabbed the lead, the Senators “turned the switch.”

“It’s almost like when we got the lead early we thought it was going to be an easy game and thought we were going to score a lot of goals and put on a show,” he said. “But that’s not the way we play, that’s not the team we are. It hasn’t been, it’s not going to be. We’ve got to defend, we’ve got to chip and forecheck, get after them.”

Expect the roster to be overhauled. Botterill made mostly minor changes prior to the season. This summer, he might make significant moves.

The Sabres consistently showcase feeble efforts with a slew of players fighting for jobs.

Housley understands he will also be evaluated.

“We’re all in this together,” he said. “We’re all going to try to turn this around. We all got to be better.”