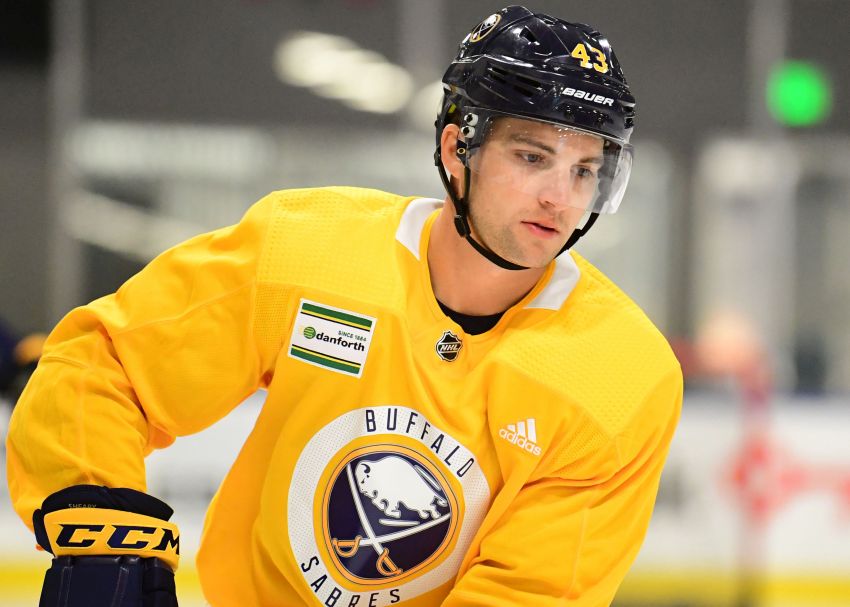 BUFFALO – Just as one Sabres winger, Conor Sheary, returned from an injury Sunday, they lost another one.

Toward of the end of practice, Scott Wilson got tangled with defensemen Rasmus Ristolainen and appeared to injure his right leg. Wilson stayed on the HarborCenter ice for a couple of minutes before being helped off. He couldn’t put any pressure on his right foot.

Following a day off, the Sabres practiced with a healthier and smaller roster. The Sabres assigned Justin Bailey and Nick Baptiste to the Rochester Americans on Sunday, just hours after the 23-year-old wingers cleared waivers. Neither practiced earlier in the day.

Housley said he planned to talk to them later Sunday.

The Sabres have 28 players left in training camp. They need to pare the roster down to 23 by Tuesday. They open the season Thursday against the Boston Bruins.

Sheary, an offseason acquisition from the Pittsburgh Penguins, skated at left wing Sunday beside center Casey Mittelstadt and Tage Thompson.

“I thought he looked great,” Housley said. “He got some bumping and grinding in there at the end, which is good to see. He looked solid, a little rusty.”

Of course, missing more than two weeks wasn’t ideal. The Sabres expect Sheary, who has scored 42 goals over the past two seasons, to be one of their top offensive contributors.

“It’s definitely tough not being around the guys,” Sheary said. “You want to create chemistry and meet your teammates and linemates … during camp. I think I’ll adjust pretty quickly here in the first week of practice and hopefully going into the first game.”

Housley wants to utilize the 5-foot-8 Sheary, 26, in all situations.

“(He has a) competitive fire,” Housley said. “He’s really strong into battles and plays the game the right way, a 200-foot game, gets on the forecheck.”

Brendan Guhle, 21, is also close to earning a place. The speedy defenseman played 18 games last year as a pro rookie. Having nearly made the Sabres as a teenager in 2015 and 2016, he understands the rigors or NHL camps a bit.

Housley said: “He’s got a little bit of experience now. I really like his speed and how he attacks the game, so that’s why he’s here right now. We haven’t made any final decisions on our roster.”

“I didn’t do anything spectacular, but I think I was solid, I built my game from the first game and the best game was the last game,” he said. “If I can keep doing that, I think I’ll be in a good spot.”