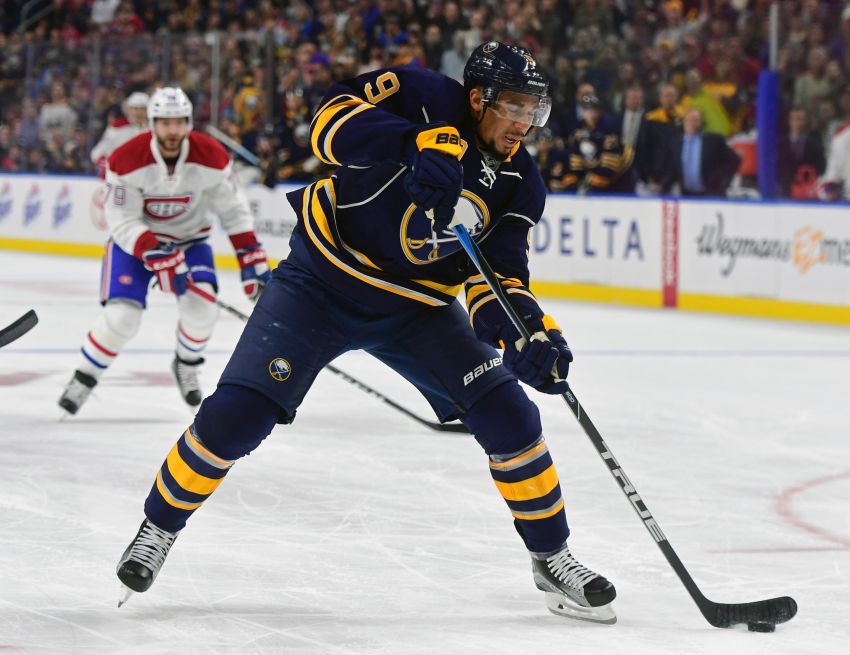 BUFFALO – If Thursday’s dispirited 4-1 opening-night loss to the Montreal Canadiens turns out to be a harbinger for the 2016-17 season, well, the Sabres could be in for a long six months.

In addition to an ugly setback to their Atlantic Division rival, first-line winger Evander Kane was taken to the hospital after he slid on his back and crashed his left side hard into the end boards following contact from Alexei Emelin late in the second period.

Sabres coach Dan Bylsma had no update on Kane, who writhed in pain and was helped off the ice.

“They’re checking for a lot of things internally,” he said. “I don’t have a lot more than that.”

In a span of just 36 hours – young star Jack Eichel suffered a high ankle sprain in practice Wednesday – the outlook on the Sabres’ 46th season has quickly shifted from optimistic to gloomy.

Few teams can win with that much talent missing. Right now, the Sabres have little margin for error.

“There’s a little bit of (you) shake your head and (you’re) snakebitten a little bit, but that’s kind of come in droves,” Bylsma said. “But that’s part of our game. … You know you’re going to have injuries. You know you expect to have them throughout your lineup, and unfortunately you have a rash of them.

“But that’s no excuse for how we need to play, how we can play. We got to keep fighting through it.”

The Sabres expect Eichel to miss around six to eight weeks, general manager Tim Murray said. Kulikov and Okposo have been skating and could return soon.

In the meantime, the Sabres have “to keep an even keel,” defenseman Zach Bogosian said.

“The more excuses we make for ourselves with injuries and stuff like that, it’s not going to help anyone else,” he said.

Sabres winger Marcus Foligno said: “It’s been a little bit of bad luck lately. You can’t bathe in your sorrows. … You got guys in here that can step up, definitely maybe a call-up or something like that. We need some guys.”

The Sabres generated nothing early against the Canadiens, who started backup goalie Al Montoya instead of Carey Price (flu). It took them about eight minutes to register their first shot.

“It looked like we came out with a little bit of jitters,” Bylsma said. “We fumbled the puck, let that be a factor in the game. Overexcitement, maybe, overzealous and took us a while to get our feet underneath us after the first 10 minutes.”

Brendan Gallagher scored the first of his two goals at 8:43. Former Sabre Torrey Mitchell made it 2-0 in the second period.

“I told him he was going to get two tonight,” Bylsma said. “It’s certainly big for his confidence and a power-play goal. I thought at that point in time we were coming back in the game.”

Gallagher and Andrew Shaw sealed it with third-period goals.

By the end, the atmosphere inside KeyBank Center felt like it did two or three years ago, when the Sabres became the NHL’s laughingstock. Fans were frustrated. Most of the capacity crowd of 19,070 fans departed early.

In his first regular-season appearance since March 16, Sabres goalie Robin Lehner, who battled a high ankle sprain throughout last season, made 20 saves.

Shaw slew-footed Johan Larsson at the end of the game, knocking the Sabres center to the ice. Bylsma said Larsson wasn’t injured.