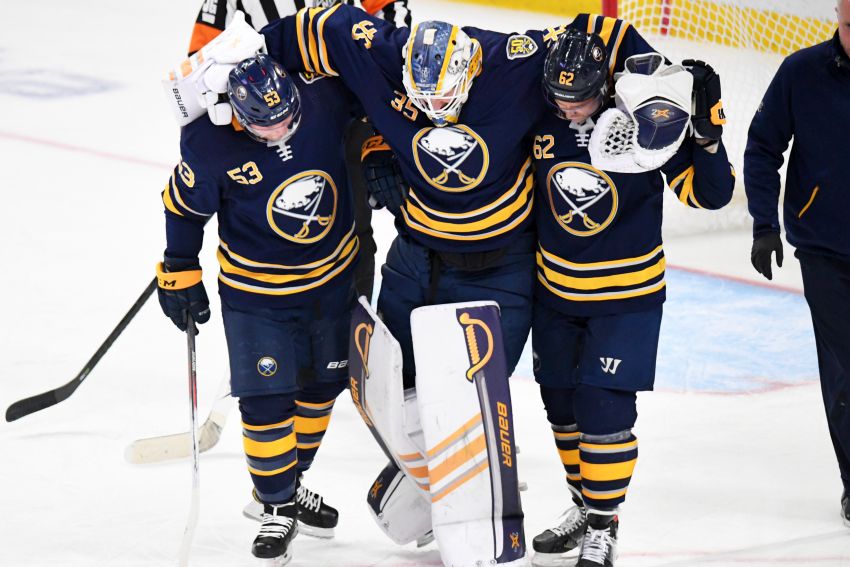 Sabres goalie Linus Ullmark is helped off the ice by Jeff Skinner (53) and Brandon Montour on Tuesday. ©2020, Micheline Veluvolu

At first, the center offered terse answers. He stared at a reporter who asked about the Sabres’ need for roster help.

But Eichel, whose Sabres just enjoyed a 10-day break between games, eventually opened up a little, letting his frustrations spew out.

Not only had one of the NHL’s also-rans just beaten the Sabres, goalie Linus Ullmark, the team’s backbone, was helped off the ice after suffering a lower-body injury in the third period.

“We can’t play like that at home, a team coming off a back-to-back, we just had a break,” Eichel said. “It’s not good enough. I mean, if you want to make the playoffs, that’s not a playoff-caliber effort by us.

Thirty-two games remain in what has become another lost season for the Sabres. The chances of them even shaving the 10-point playoff deficit in half and roaring back into the chase were slim.

Still, Tuesday kicked off a post-NHL All-Star break stretch in which they play nine of 10 games at KeyBank Center, where they’ve established themselves as a strong home team.

But the brutal loss to the Senators and Ullmark injury’s – Sabres coach Ralph Krueger said the injury “will be looked at deeply” today – might extinguish any faint hope the Sabres held.

His replacement, Carter Hutton, hasn’t won a game since Oct. 22.

Expect the Sabres to recall veteran Andrew Hammond or Jonas Johansson, an AHL All-Star, from the Rochester Americans today.

Ullmark has morphed into arguably the Sabres’ best player not named Eichel, keeping them in games by making a few critical saves most nights.

Krueger has utilized Ullmark often, starting him 13 of the last 14 games and 25 of the last 30.

On Tuesday, Ullmark looked strong again, stopping 30 shots, including 17 in the second period.

Then with about 11:48 left, Ullmark’s right skate appeared to get caught in a rut in his crease. He fell backwards and stayed on the ice before teammates Brandon Montour and Jeff Skinner helped him to the locker room.

Krueger said Ullmark has been “a centerpiece” for the Sabres.

But Krueger said it was “more painful” the way the Sabres lost Tuesday.

“What we did or didn’t do to get the points we desperately wanted here tonight,” he said. “Compliment to Ottawa, they used their opportunities. We took four offensive-zone penalties, unacceptable, and their power play just killed us. The specialty teams did.”

“It’s the story of the year,” Eichel said of the special teams, “so it’s frustrating.”

Krueger said of the penalty killing: “It’s unacceptable that it went that way and it’s, in the end, the difference in the game tonight.”

Pouncing on the Senators, who lost a 4-3 home shootout the feeble New Jersey Devils on Monday, would’ve helped.

Instead, it took the Sabres nearly eight minutes to record their first shot on goalie Craig Anderson.

“If you overlook things, it’ll bite you in the (butt), kind of like it did tonight,” Eichel said. “I mean, we overlooked this game. Every game for us should be the most important game on our schedule.”

Krueger said after the Sabres found their legs they “kept going in and out of the game.”

“We seemed to be in it, and then we fell back, we went it, and we fell back, and it just went that way all the way,” he said. “We never really got a rhythm or we never felt the Sabres hockey we want to play.”

The Sabres fell behind 1-0 at 3:59 before winger Sam Reinhart’s power-goal goal tied later in the period.

Old friend Tyler Ennis put the Senators up in the second period before Eichel scored his career-high 29th goal.

Then defenseman Mike Reilly’s power-play goal put the Senators up for good 8:43 into the third period.

Then two empty-net goals, including a six-on-four score, sealed the game.

By then, what remained of the announced crowd of 16,651 had left the rink.

One thought on “Sabres lose game to Senators, goalie Linus Ullmark to injury”