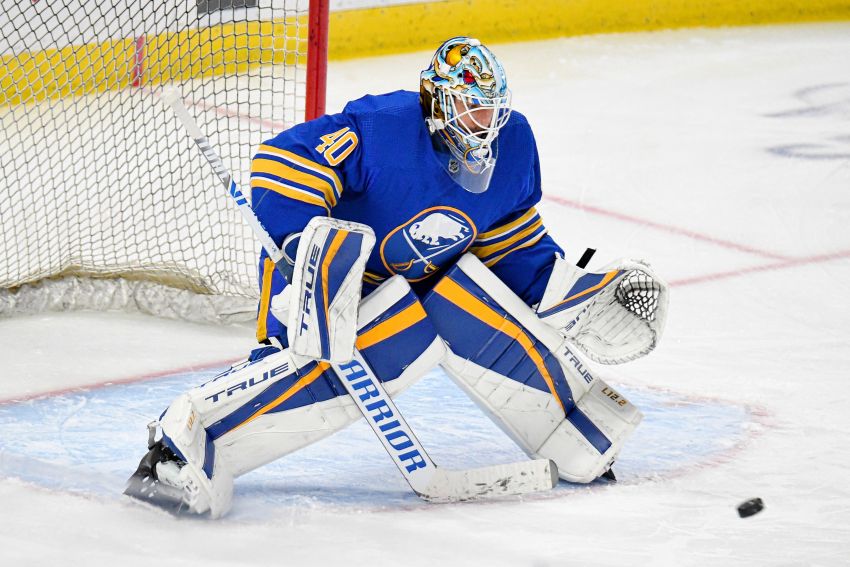 Despite taking a hit to the head from Provorov, who was checked into the crease by Sabres defenseman Brandon Montour, Hutton stayed in the game and remained sharp.

But when Hutton returned to the dressing room following the period, he started feeling the effects of the hit, so third-string goalie Jonas Johansson replaced him with the Sabres trailing the Philadelphia Flyers 1-0.

The Sabres elevated Johansson, who made his seventh NHL appearance, because Linus Ullmark was unavailable the last two games because of personal reasons.

Sabres coach Ralph Krueger said following the 3-0 loss that Hutton was “under assessment.”

“It was really disappointing in a game, the way it was going, to lose midway through the game a very, very strong Carter Hutton,” Krueger said on a Zoom call from Wells Fargo Center. “After that, he didn’t feel the effects of the hit, actually, which can happen sometimes, until the intermission when he got in and he sat down.

“So I think his adrenaline kind of kept him going.”

Krueger, whose Sabres shellacked the Flyers 6-1 on Monday, has seen enough of opponents hitting his players in the head.

Center Eric Staal was elbowed in the jaw last week. Defenseman Rasmus Dahlin took a forearm to the head Monday.

“It’s in four games the third hit to the head of, for me, a violent type,” he said. “If you look at the way that the elbow comes extended, you know what you’re doing.”

A night after perhaps their best effort under Krueger, the Sabres pumped 40 shots on Flyers goalie Brian Elliott. They also hit a post and a crossbar.

“He was good, but there was moments I think we could’ve done a better job of getting to him, getting to the net, being assertive in that area,” Staal said of Elliott.

Before they left for Philadelphia, Krueger said the Sabres could sit out some young players so “we don’t give anybody too much too quickly.”

On Tuesday, the Sabres scratched winger Tage Thompson, who began the season on the No. 1 line, and promoted Rasmus Asplund from the taxi squad to take his place beside center Cody Eakin and Tobias Rieder.

“We looked at the back-to-back for Tage with Washington (last week),” Krueger said. “We thought the back-to-back might be a little much. We all know that he’s coming from the longest break of anybody here, and we want to be careful on the integration. We like the way Tage has bought in here and what he gives us for a presence.

“We need to keep a few other players in action with Rochester not playing. We thought it was a good time to bring in Aspy.”

Thompson, 23, did not play a game for nearly 14 months after injuring his right shoulder last season.

“It was a tough game for him to come into,” Krueger said of Asplund. “It was a real tight game, there were specialty teams at times, we reduced the lineup in the third period being down 1-0 to make a push.

“But I thought he did well with the opportunity he had. He made simple plays.”

One thought on “Sabres lose game to Flyers, goalie Carter Hutton to injury”