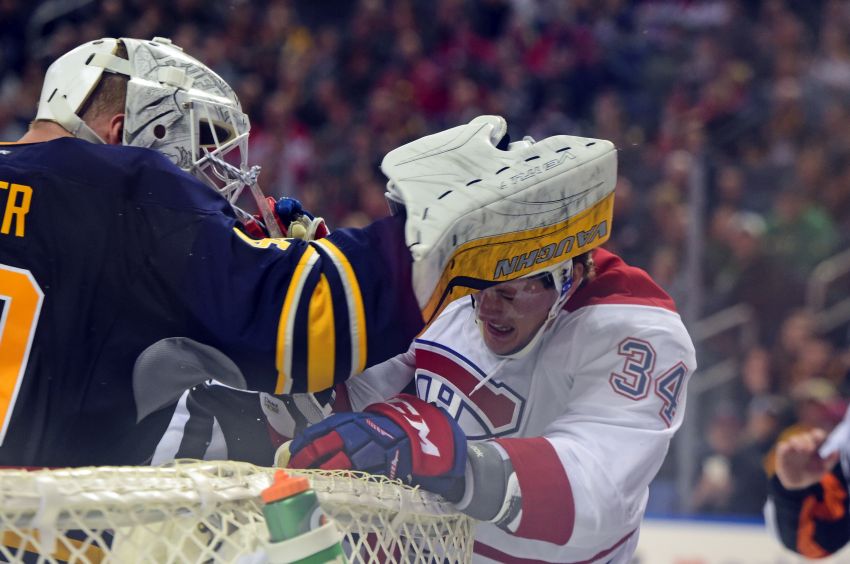 But by about 9 p.m., as chaos enveloped his crease at the end of a penalty-filled second period, the fiery Sabres goalie wanted to see Scrivens, someone he called “a good guy off the ice,” again.

Seconds after Montreal’s Michael McCarron punched Lehner after he grabbed him, he shot Scrivens a long stare from his crease after his counterpart skated to center ice.

Lehner, all 6-foot-5 and 240 pounds of him, was held by an official. Scrivens, who gives up three inches and 60 pounds to Lehner, wisely stayed put.

“I grabbed him and I pulled him away,” a huffy Lehner said about McCarron. “He punched me, I punched back. Scrivens had about 30 seconds to come and do something. He didn’t. He stood there. Then the ref was there, it was over. Next year, if he wants to go, I’m right here.”

Lehner gave Scrivens an earful after the period ended 30 seconds later. The Swede thought Scrivens should’ve stood up for his guys.

“Do something,” Lehner said he told him. “You can stand up there and do whatever you want. You’re not going to punch me from over there.”

As Lehner’s words and actions illustrate, the Sabres lost their cool in a big way before the bipartisan crowd of 18,815 fans inside the First Niagara Center.

“A lot of intensity,” said Sabres winger Marcus Foligno, whose short-handed goal tied it 11:56 into the third period.

The Sabres thoroughly outplayed the Canadiens throughout the intense contest, outshooting them 43-22, including 5-0 in overtime, an odd scoring decision considering former Sabre Paul Byron won it at 3:15.

“I wouldn’t have looked at it as a problem at too many other points, but today, absolutely,” Sabres coach Dan Bylsma said about the composure. “I don’t think I’ve seen quite the type of calls that both teams received today in terms of 10 minutes. But we certainly let the game get away from us with our composure level.”

To Bylsma, Lehner’s second-period actions allowed the officials to give penalties.

The game between the longtime rivals, in fact, felt like an Adams Division throwback to the 1970s or 80s. Memorial Auditorium or the Montreal Forum might’ve been a more appropriate venue.

Why was the game so intense?

“That team had a lot of players injured,” Lehner said. “There’s a lot of call-ups, a lot of young guys that want to make a name for themselves. They want to play hard. I don’t know. They play tough, but they didn’t do anything.”

They did enough to win, however. Byron scored when his pass to former Sabre Torrey Mitchell hit defenseman Zach Bogosian’s stick as the two moved toward the net.

“It’s a terrible bounce that goes right off my tape and in,” said Bogosian, whose power-play goal opened the scoring.

The Sabres were grateful to have No. 1 center Ryan O’Reilly, who missed 11 games with a broken foot, back Wednesday. The Sabres’ lone NHL All-Star and most versatile player skated 22 minutes, 2 seconds in his first action since Feb. 19.

“It didn’t looked like he missed a beat at all,” Bylsma said.