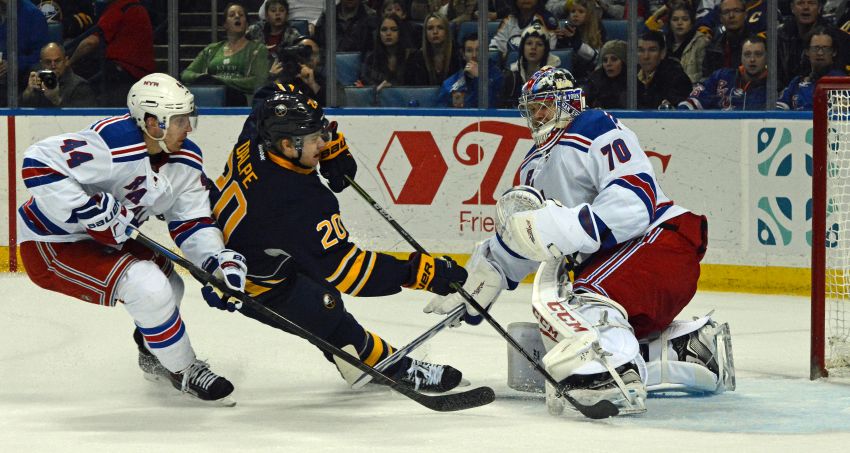 BUFFALO – These days, as the Sabres’ awful season mercifully winds down, their efforts have remained strong.

Sure, they’re badly outmatched every game. But tenacity and strong goaltending has leveled things out a bit, keeping them in some contests.

Well, scoring a goal would help now and then.

They hung with the slick Rangers, dodging bullets all night against the Eastern Conference powerhouse. Still, they couldn’t exploit rookie goalie Mackenzie Skapski, who made 20 saves for his first NHL shutout.

Eventually, Rangers defenseman Keith Yandle scored 7:31 into the third period, generating a loud roar from the bipartisan capacity crowd of 19,070 fans inside the First Niagara Center.

Skapski has played two NHL games, both wins against the Sabres. The 20-year-old allowed a goal 14 seconds into his NHL debut on Feb. 20, a 3-1 Rangers win here.

So Skapski, Cam Talbot’s backup as star goalie Henrik Lundqvist recovers from a neck injury, has a shutout streak of 119 minutes, 46 seconds against the Sabres.

“It all started with the first one,” Skapski said, “and now tonight I don’t think you could script it any better. Our defense and our forwards were excellent as always.”

Naturally, the Sabres wanted to exploit Skapski, who made 24 saves in his only previous outing.

“He got whacked four times,” Nolan said. “But when you’re in our position, you don’t get quite the calls you like, either. We had our chances.”

But Lindback still hasn’t won a game since the Sabres acquired him from Dallas last month.

The Sabres made one lineup change, scratching defenseman Zach Bogosian, their top minute-muncher.

“He tweaked just a little something this morning, lower body,” Nolan said. “We thought maybe one game would be (better) than losing him for four or five. Hopefully, he’ll be back next game.”

One thought on “Sabres lose again, get blanked by Rangers rookie Mackenzie Skapski”