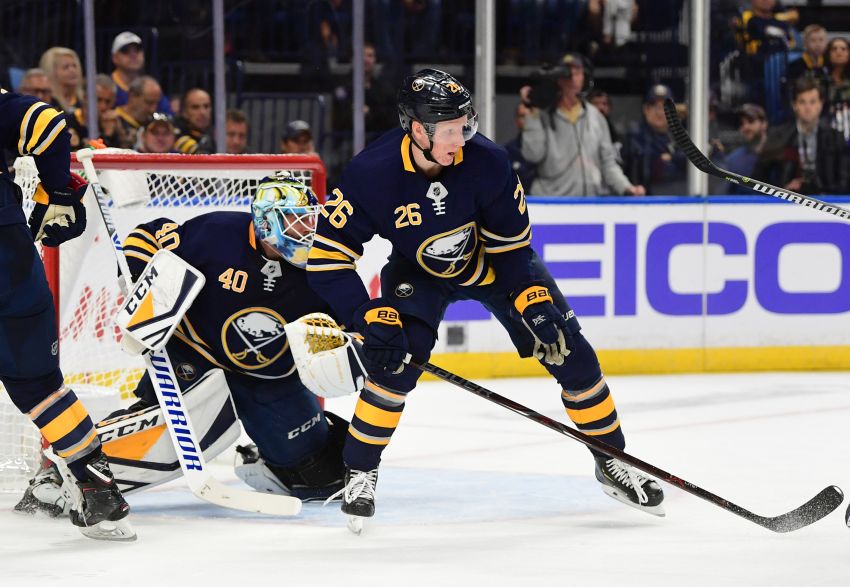 The Sabres looked dreadful against a Bruins team that had been annihilated 7-0 the previous night. So much for all that optimism.

It felt like old times inside KeyBank Center. The Sabres generated about two scoring chances in the opening 40 minutes.

So when a reporter asked Housley about his team’s compete level, he kept going, dissecting seemingly every aspect of the loss.

By about the two-minute mark, Housley challenged his players.

“So was it disappointing in front of a good crowd that was here to support us? You’re dang right,” he said. “It’s disappointing. So what can we control? We can control how we come to the rink tomorrow and work, because we are not going through this again.”

Clearly, the team’s fans don’t want to endure another embarrassing season. They were promised a better, more entertaining product. That’s why so many in the capacity crowd of 19,070 unleashed some anger with the Sabres trailing 3-0 after two periods.

“They’re so passionate,” Sabres winger Kyle Okposo said of the fans “It’s hard when you aren’t giving them the product they want, they deserve. Tonight it wasn’t there for the whole game. It’s something that has been all-too-common here, and I think that’s our job to change that. We did a lot of good things and now it’s here, now we got to play.”

Okposo said the Sabres started well, then never responded after Zdeno Chara opened the scoring 6:33 into the game.

“We stopped dictating the play and we started to be just kind of fragile,” Okposo said. “I think that happens. It doesn’t happen when you’re a really good hockey team. You just keep going, you keep going in and you got to learn that. …

“We got to learn to play with adversity.”

Sabres captain Jack Eichel said: “Maybe at times we were thinking a little bit too much, sitting on our heels not on our toes, not going after it.”

“Now, it’s you get punched in the mouth, it’s like, what do you do?” he said. “I just didn’t like our response. It was, like, OK, we did some OK things but it’s not good enough.”

He added: “I’ve said it before, you’re not a good team until you are, and we got to learn how to be a good team, because good teams, when they get scored on, they play the exact same way and the keep coming all the time.”

“It’s just a choice, to me,” he said. “I think all the intentions, they mean well from our group. But they have to recognize the situation. If you’re going against a three-on-three or a two-on-two, this league is too good. You’re not going to beat guys one-on-one too many times, so you have to take what’s available, and that’s getting the puck behind.

“That’s all Boston did tonight. When they were through the rush, they put pucks behind us and went to work, and that’s all we got to do.”

In his NHL debut, Dahlin skated 22 minutes, 37 seconds, mostly beside Jake McCabe. The rookie defenseman looked tentative during his NHL debut, rarely moving the puck. He was a minus-1

Housley said Dahlin got better as the game progressed.

“A young man on a big stage just trying to get accustomed to the North American game, a sold-out crowd,” Housley said.

Former Sabres goalie Jaroslav Halak made 32 saves for the Bruins.