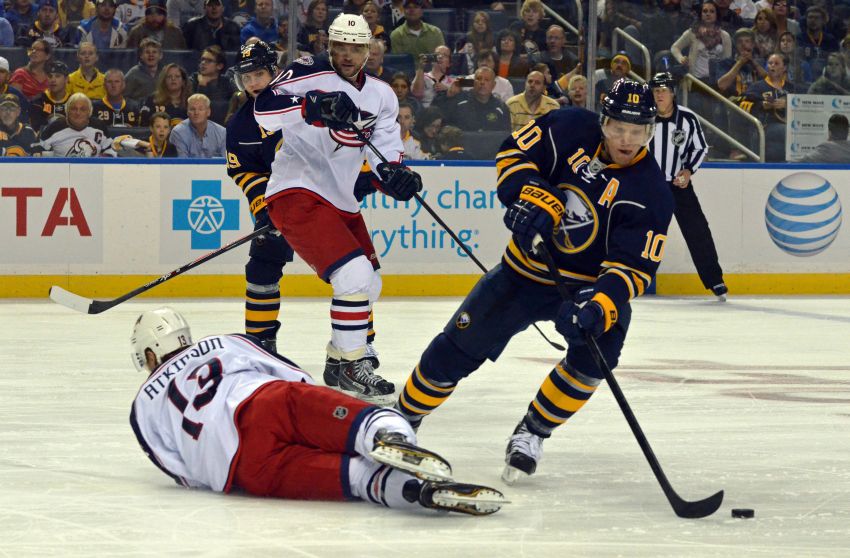 Still, did anyone really expect them to be this bad?

The 18,210 fans inside the First Niagara Center booed the Sabres throughout their listless effort.

“We can understand their frustration,” said Sabres defenseman Tyler Myers, who was on the ice for Columbus’ three first-period goals. “It wasn’t a pretty game. It certainly wasn’t a good game for me. I have to be much better. I know that.”

By the end of the hesitant, ugly performance, some of the remaining fans began chanting, “Fire Darcy.” Minutes earlier, fans had booed a video of struggling winger Drew Stafford talking about his favorite workout.

Seventy-seven games are left this season. More growing pains and efforts like Thursday’s are likely coming.

But don’t pin the Sabres’ struggles on their youth, said a visibly agitated Mike Weber, a minus-4 Thursday.

“I’m tired of hearing it’s a young team,” the defenseman said, growing more upset by the word. “I’m really tired of hearing it. There’s no excuses in here. All these guys have played now five games in this league. We need to find a way.”

“The young excuse, that excuse is out the window,” Sabres winger Marcus Foligno said.

Ryan Miller said the Sabres “can’t use that right now.”

He added: “There are expectations in here. It’s not just a learning season. … This is about a chance to play for the playoffs and play for a Stanley Cup. We’re wasting time.”

But the Sabres, who have five rookies on the roster, can’t mask their inexperience.

“They don’t want to feel that way,” Sabres coach Ron Rolston said. “But that’s where they are experience-wise.”

The upstart Blue Jackets outclassed the Sabres, burying them before the first period ended.

Cam Atkinson scored at 1:51, sneaking in behind Myers near the left post.

Thomas Vanek’s nifty, between-the-legs shot tied it at 8:50. His 252nd goal tied him with Craig Ramsay for fifth on the team’s all-time list.

That was the Sabres’ lone highlight.

“I thought we were actually playing pretty well before we made a couple mistakes at the end of the first,” Rolston said.

Nick Foligno put Columbus up for good at 16:45. Then Marian Gaborik tallied at 18:48, converting a two-on-one break after Myers pinched in. Weber, Myers’ partner, had to defend alone.

“That’s a play I can’t be making,” Myers said. “I have to be much better in decision-making like that. I think my game is at its best when I’m not trying to force things, and that play I was definitely trying to force it. I made a good play coming out of the zone. I didn’t need to go down the wall there.

“As a group, I think we need to just start playing. It’s very hesitant out there. It looks like we’re scared to make plays.”

Weber, a league-worst minus-8, echoed Myers.

“We come into a game and we’re squeezing our sticks. I don’t know. I don’t know what else to say about it. We just got to find a way to get that hesitation out of our game, just play hockey. Bear down, battle compete, play hockey.”

“Instead of making plays, we at times battle hard and give it right back to them,” the co-captain said.

Brandon Dubinsky scored early in the second period. By then, Rolston had broken up Myers and Weber.

“I think they’ve been minus I don’t know what in the last couple games,” Rolston said. “So we had to make a change there.”