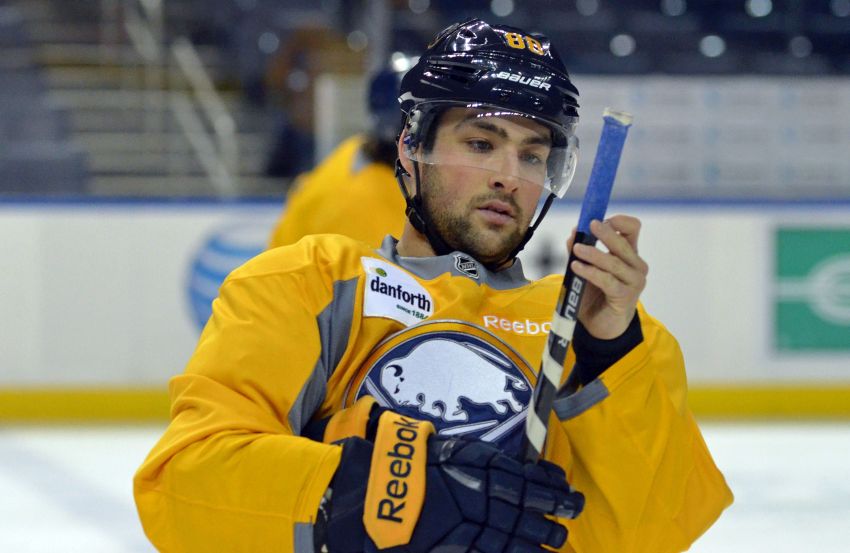 BUFFALO – The short Sabres careers of winger Cory Conacher and defenseman Jamie McBain are over.

The rebuilding club passed on giving them qualifying offers as restricted free agents, making them free to sign with any team.

Sabres general manager Tim Murray said Monday morning McBain, who struggled his one season here, wouldn’t be coming back. Murray put Conacher, a waiver acquisition from Ottawa, in the “maybe” category. Hours later, however, they officially let him go.

Todd Reynolds, Conacher’s agent, told the Times Herald he was “somewhat surprised.” Two weeks ago, he thought they would keep his client.

Reynolds expects some interest in Conacher, a Canisius College product. Multiple teams claimed him in March. The Sabres received him because they ranked 30th overall.

The 24-year-old had three goals and six points in 19 games. Ottawa acquired him from Tampa Bay in 2013 for goalie Ben Bishop, a Vezina Trophy finalist last season.

Meanwhile, McBain compiled six goals, 17 points and a minus-13 rating in 69 appearances. The Sabres acquired the 26-year-old in the Andrej Sekera trade with Carolina a year ago Monday.

Murray called Ennis, the Sabres’ leading scorer and No. 1 pivot, and Foligno, who’s shown flashes of being a top power forward, “long-term” players.

He said he’s had a “little bit of back and forth” about Ennis’ contract and has also talked with Foligno’s agent. He doesn’t foresee a problem getting Foligno’s deal done. No offer has been made.

Murray said the Sabres might give Ruhwedel a better offer “that gives him a little more opportunity to do more here.”

Murray said the Sabres discussed every scenario regarding Christian Ehrhoff’s future. Yes, they could’ve traded the defenseman. Ultimately, that could’ve bitten them badly in several years, as much as $10 million against the cap in dead money, according to capgeek.com.

“With the penalties on his contract on the end if he were to retire, we felt that in six or seven years when he’s making a million dollars and has a lot of incentive to retire, that the penalties are too high for where we want to be at that time,” Murray said inside the First Niagara Center. “We want to be a contending team that spends to the cap that has ability to acquire a free agent at the trade deadline that puts us over the top, that makes lots of money.

The Sabres introduced slick center Sam Reinhart, the No. 2 pick at the NHL Entry Draft, to the community Monday, taking him around to five local radio stations, three local businesses and holding a news conference.

Reinhart had never been to Buffalo.

Murray praised Reinhart’s skill, saying, “What he does at the junior level reminded me of (San Jose star) Joe Thornton.”

He added: “That’s the type of dominance he’s had with the puck that I’ve seen in the whole group of guys I’ve scouted in hockey in 21 years.”

Reinhart went home Monday night and will return for summer development camp later this month. He also has a Team Canada world junior camp later in the summer.

The 18-year-old told WGR he prefers to be called “Samson,” his given name. When asked later, he said he doesn’t care what he’s called.

Murray, who never holds back, on his candidness: “I guess I’ve said some things that maybe I shouldn’t have a couple times. I have to probably learn to say the proper thing.”

The Sabres even offered him media training. He wanted to pass since the team’s fan base has approved most of his decisions, they like what he says.

“I said, ‘I don’t need media training because it’s all going well now,’” he said. “But I took it. I think it helped a little bit.”

Eventually, if the Sabres struggle again, he knows fans will become angry.

“Everybody knows the direction,” Murray said. “We still want to be better than we were and more competitive than we were. If that doesn’t happen right out of the gate, I know that the guy at the top is going to take his heat. I can take that. I’ll just find a different place to go to dinner at night, that’s all.”