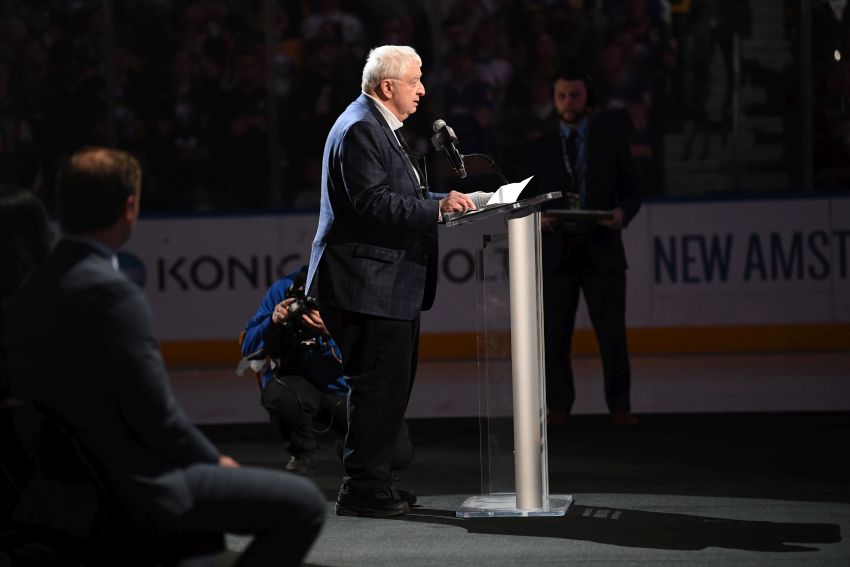 How many NHL announcers call games for 51 years, let alone with one team?

“That’s unheard of,” a proud Jeanneret, who will be calling his final game tonight, told the Times Herald last month. “That’ll never be matched again, not a chance.”

If Sabres fans had their way, there would be a 52nd season. It feels like everyone wants Jeanneret, one of the most popular figures in franchise history, to keep going. Just another year, he said they often tell him.

There’s a comfort and familiarity in his voice, and Sabres fans don’t want to lose that.

“It’s such a staple,” said Gerry Meehan, the former Sabres captain and general manager. “It was a such a constant theme of the Sabres experience – the good years, the not-so-good years, the average years, the lousy years, the great years – he’s been something that people can count on, hearing the same voice all the time.”

Sure, some fans tell Jeanneret to enjoy his retirement.

But Jeanneret knows it’s time to say goodbye. The 79-year-old said he used to bounce back quickly after games.

“I’ll tell ya, sometimes I go down now at the end of a game and I just collapse in the backseat,” said Jeanneret, who has used a car service this season to travel to from his Niagara Falls, Ontario, home to the rink.

Tonight’s season finale against the Chicago Blackhawks at KeyBank Center promises to be another memorable affair. When the Sabres raised Jeanneret’s banner to the rafters April 1, they rode the wave of emotion all night, scoring three first-period goals and downing the Nashville Predators 4-3 before a raucous capacity crowd.

“I got to thinking about the other day, what if the rink’s empty because everyone wants to listen to Rick do his last game?” joked Harry Neale, one of Jeanneret’s former color analysts. “I don’t think it’s going to happen, but people will miss him.”

They’ll miss Jeanneret for myriad reasons. He connected with fans like few announcers have in any sport.

“What always amazed me was he could turn an ordinary game and turn it into a very exciting game, and to me, that’s a real gift of a broadcaster,” said ex-Sabres forward Jim Lorentz, another one of Jeanneret’s former color analysts. “People tend to gravitate toward all the great calls, and there’s so many of them, but for me, I look at the full body of work, and it was just superb, night after night of excellence.

“It was just a joy doing games with him. And we had so much fun. And I think that was the other thing, we were comfortable with each other. I knew when to step in, when to stay away from the play-by-play, and I think he appreciated that, and it just worked really well for the two us.”

Neale said he knew it was his job to talk when the play stopped.

“If I had a story to tell or a replay to look at, that was my spot,” he said. “I watch a lot of games now, and the color commentator often talks right through a breakaway. If you ever did that with Rick Jeanneret, you’d be at center ice.”

Beyond his play-by-play, Jeanneret’s everyman personality resonated with fans.

“He comes across as an affable, intelligent … colorful and friendly,” said Paul Wieland, who hired Jeanneret in 1971 when he was in charge of the team’s broadcasts. “That’s the way he meets the world, too, as you can see enough. All (these honors), he’s handled himself with great poise and seemed to enjoy himself.

“But he doesn’t act like he’s the king of Arabia or something when he’s out doing a ceremony or something. He’s pretty self-measured.”

When the Sabres needed another play-by-play man in 1971, Wieland listened to one of Jeanneret’s broadcasts for the junior Niagara Falls Flyers and heard “the same things that impressed people for his whole career.”

Wieland had no idea Jeanneret’s career in Buffalo would last 51 years.