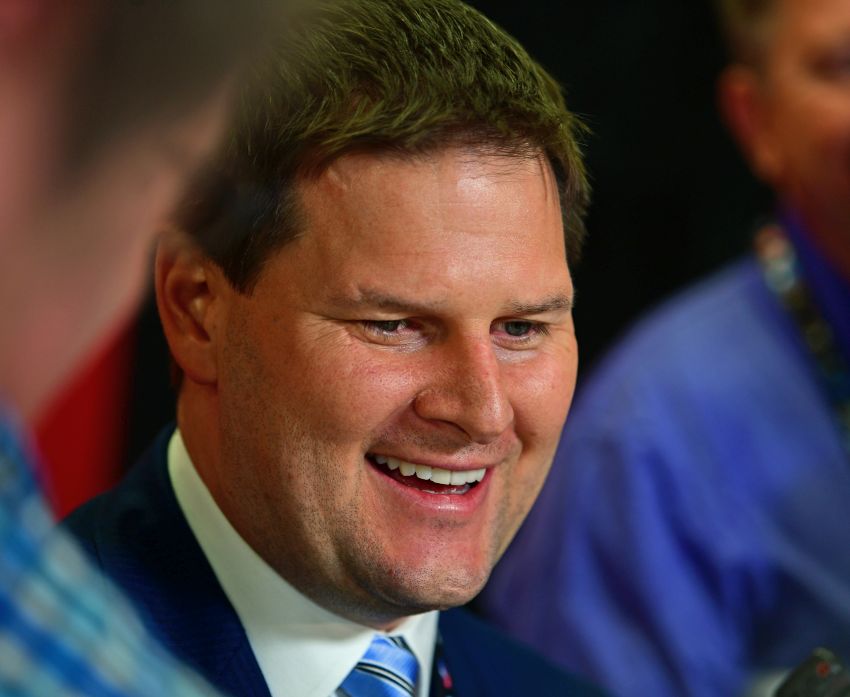 Jason Botterill has more work to do this offseason. ©2018, Hickling Images

“Sometimes you think a lot of things make sense and things just don’t come to fruition,” Botterill of making deals.

So perhaps O’Reilly, an NHL All-Star in 2015-16, could be dealt soon. The Sabres owe him $7.5 million next Sunday, meaning some interested teams might want to wait until after the bonus is paid out to consummate a trade. Or maybe a deal of lesser significance will take place.

The players the Sabres selected Saturday:

– Mattias Samuelsson, a defenseman with the United States National Development Program, in the second round, 32nd overall.

The 6-foot-4, 218-pound Samuelsson is the son of former NHL defenseman Kjell Samuelsson.

– Matej Pekar, a forward with the junior Muskegon Lumberjacks, in the fourth round, 94th.

“I saw the opportunity that I could get better exposure, face some better competition and just try to make it,” Pekar said of coming to North America.

Pekar plans to play at Miami University next season.

– Linus Lindstrand Kronholm, a defenseman with the Malmo Redhawks, an under-20 junior team, in the fourth round, 117th.

– Miska Kukkonen, a defenseman with Ilves, an under-20 junior team, in the fifth round, 125th.

– William Worge Kreü, a defenseman with Linköping, an under-20 junior team, in the seventh round, 187th.

The Sabres also traded their sixth-round pick, 156th, to Toronto for the Maple Leafs’ 2019 sixth-rounder.

Botterill said the Sabres wanted to bring in an asset for next year.

“You look at our pipeline right now … we had to have more defensemen in our group,” Botterill said.

He added: “You can never have too many defensemen.”

Still, Randy Sexton one of the Sabres’ assistant GMs, said the Sabres don’t draft to fill slots. Instead, they take the best player available.

“There were certainly a few forwards there today that we hoped might drop to us that didn’t and as a result the next player on our list happened to be a defenseman,” he said.

This year, Botterill said he felt more comfortable running the draft. A year ago, he said “there was an awkwardness” as he was trying to get a feel for people.

Botterill likes to stay out of the way of his amateur scouts.

“You have to trust those people in those roles,” he said. “If you dabble in it a little bit, I think you almost mess it up a lot of times. You’re having those guys who are focusing on it for an entire year.