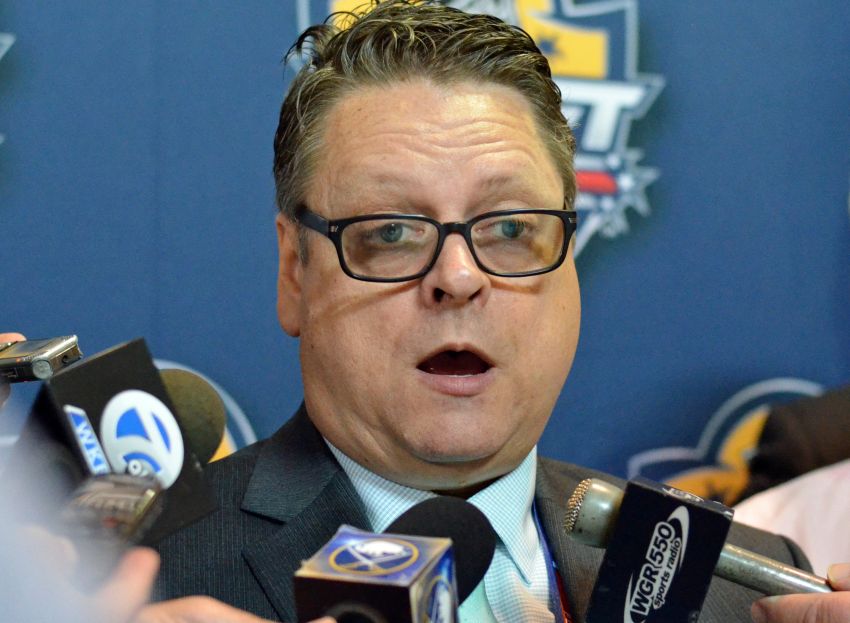 SUNRISE, Fla. – Tim Murray isn’t one for reflection. The gruff Buffalo Sabres general manager usually focuses on one task before quickly moving to the next one.

But at some point today, after an arduous NHL Draft weekend in which he added major assets, Murray will hop on a plane home to Buffalo and feel a sense of satisfaction.

Still, Murray’s not too happy with his roster overhaul yet. When pressed Saturday, he conceded the rebuilding team has “taken big strides” and he feels better about it. But he won’t talk about the playoffs.

“I’m not going to put pressure on our players and coaches and say that we’re a playoff team,” Murray said. “I think there’s still a lot of uncertainty and everything’s new. Let’s see how it comes together in training camp. If you ask me the question at the end of October, I won’t answer it.”

Others are excited about the acquisitions, however. Murray and new coach Dan Bylsma disagree over how much the Sabres improved.

“I said, ‘Tim, I think we got more than a little bit better,’” Bylsma joked. “He said, ‘No, we just got a little bit better.’ That’s certainly true. From the outside, where we started (Friday) morning to the end of the day, a lot changed and a lot was added to the team.”

Murray understands why Bylsma, who inherited a weak roster just a month ago, feels so happy.

“It’s Christmas morning for coaches every time you add a proven good to very good NHL player,” he said. “Yeah, I can see that they’re excited.”

Naturally, Bylsma and Murray had spoken about the direction of the team. The two chatted about O’Reilly two weeks ago. Knowing some big moves could happen made Bylsma “the most anxious I’ve been at the draft.”

Eichel and O’Reilly will likely force the Sabres to move a center or two to the wing.

Bylsma hinted Zemgus Girgensons, a winger early in his career before moving to the middle, could be switched back. He also mentioned Sam Reinhart, who played wing during a three-game run in Rochester. Murray pointed out O’Reilly has also played wing.

“He’s a top player in the league and plays in so many different situations, has great skill level, plays at both ends of the rink, power play, penalty kill,” Bylsma said.

Players Bylsma has spoken to were “really pumped up about him.”

“I feel the same way,” he said. “I think maybe we’re going to be surprised.”

The Sabres now have plenty of depth up front but, having traded Nikita Zadorov in the O’Reilly deal with the Avs, need to add a left-handed defenseman, Murray said. He plans to pursue one via trade or when free agency opens. He has already talked to some teams.

The Sabres could also have one fewer forward soon. Cody Hodgson, fresh off a wretched six-goal, 13-point season, is still a buyout candidate. Murray said Friday he has a plan for the 25-year-old. He must decide his future by Tuesday.

“I’m just going to stick to what I’m going to do and be very open with you guys when I can be and keep you in the dark on things I want to,” Murray said.

Remember, the Sabres bought out defenseman Christian Ehrhoff a year ago the morning after the draft.