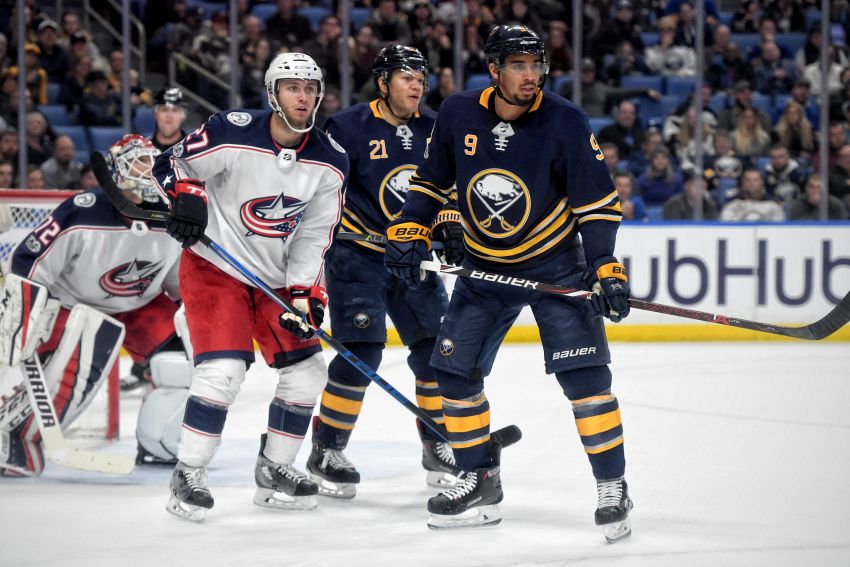 BUFFALO – Twenty-one games into another lost season, the Sabres have developed a penchant for playing some of their best hockey down multiple goals late in contests.

It happened again Monday, a game they trailed by three goals halfway through the third period before roaring back and nearly tying it.

What suddenly changed? After all, they generated little against the Columbus Blue Jackets for the first 50 minutes.

“Just our nothing-to-lose attitude, go after it, and that’s the way we have to play to be successful,” winger Jason Pominville said following the Sabres’ 3-2 loss, their sixth straight setback (0-4-2). “But we have to play that way for 60 (minutes), we’re doing it in spurts sometimes.

“Usually when we do it is when we’re behind the eight ball.”

After Boone Jenner made it 3-0 at 9:24, Sabres winger Sam Reinhart answered 13 seconds later, just his fourth goal this season.

“We get that first goal, it sparked us, it was tilt downhill,” Sabres coach Phil Housley said.

Sabres winger Evander Kane followed at 16:28, his team-leading 12th goal. Suddenly, what remained of the crowd of 16,551 fans inside KeyBank Center started buzzing.

“I know we’re capable of playing like that,” Kane said. “It’s a mindset, it’s an attitude … especially with the situation we’re in. We have nothing to lose. I don’t understand the starts.”

Reinhart said the Sabres start slowly because they often wait to get a break in the game.

“It’s frustrating knowing how we can play, how we can be against really the best teams in the league,” Reinhart said of the Sabres’ fast finish. “We got to find a way to mentally demand more and expect more.”

Pominville said: “That’s how good we can be when we’re on our toes and we’re aggressive.”

“I’m talking about maybe a half inch and lower direction that goes in,” Housley said.

With Columbus’ Seth Jones off for holding Kane, the Sabres nearly tied it during a wild scrum around the net at 18:14. The puck appeared to cross the goal line – about eight bodies swarmed Columbus goalie Sergei Bobrovsky, so it was hard to tell – but officials never called it a goal. The play couldn’t be reviewed because it was blown dead before the puck went in.

If the Sabres keep crashing the net like that, they’ll score more goals.

“You’re playing against one of the best goaltenders in the league, we talked about making it difficult for him,” Housley said. “At times, we did. That last play I thought we did an excellent play of crashing the net.”

The Sabres’ season has crashed early. At 5-12-4, they rank last in the Eastern Conference. The 31st-place Arizona Coyotes won 4-1 Monday in Toronto, moving to within one point of the Sabres.

Yes, the Sabres are that close to becoming the NHL’s worst team again.

“It’s a rough time not only for the fans in Buffalo, but the group in that locker room, coaching staff,” Housley said. “We didn’t envision this, being where we are right now, and that’s the tough battle. You hope that some of the hockey gods would give us a bounce here or there.

“But again, you create your own bounces. This is testing us mentally, for sure, but we’ve got to push forward.”

Reinhart said fans expect more of the Sabres “and they should.”

“Hopefully we find a way to play the way we’re capable of, because we do in spurts,” he said.