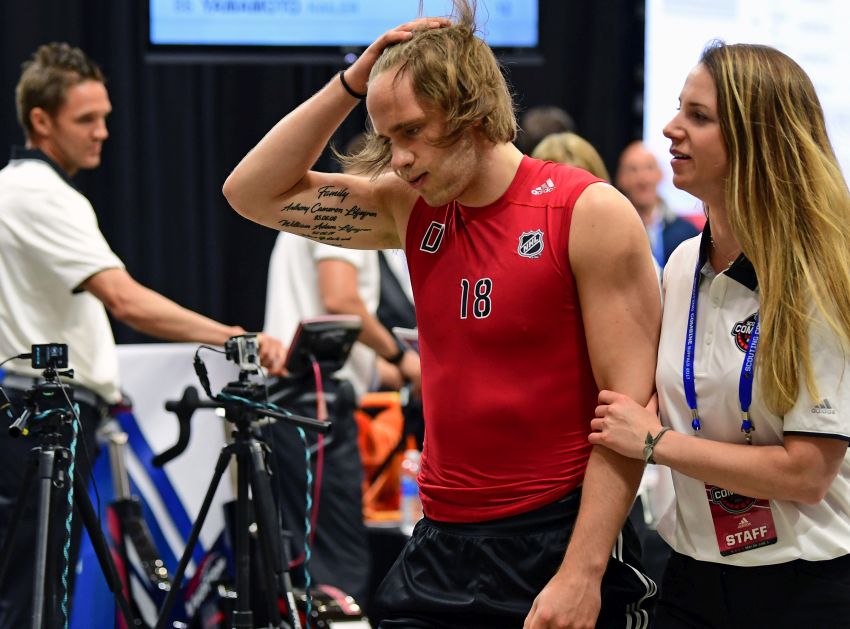 BUFFALO – Thanks to his famous name and a 6-foot-4, 215-pound frame, NHL Draft prospect Callan Foote has eyes on him whenever he hits the ice.

Foote, 18, usually doesn’t disappoint, either. A defenseman like his father, two-time Stanley Cup winner Adam Foote, he can dominate a game when he utilizes his big body, NHL Central Scouting’s Dave Gregory said. The youngster also possesses a special ability to transition the puck, a key talent in today’s game.

“He can make stretch passes behind his goal line and find someone at the far blue line or he can manage the puck to the point where he can let the play come to him and hit an open man that’s in full stride,” Gregory said.

Foote, a member of the Western Hockey League’s Kelowna Ice, should follow his father into the NHL someday.

“(He’s) fairly quickly going to be in the NHL,” Gregory said. “He’s that type of player.”

But Foote, who could be drafted in the first round Friday, isn’t even the best defense prospect available. Two North Americans – Cale Makar and Juuso Valimaki – are rated higher by Central Scouting. Two others – Miro Heiskanen and Timothy Liljegren – have higher rankings on the European list.

This year’s NHL Draft, which begins with the first round Friday in Chicago, definitely lacks a wow factor. The likely top picks – centers Nolan Patrick and Nico Hischier – are terrific prospects. But they’re not exactly Connor McDavid and Jack Eichel, the phenoms who went first and second in 2015.

It’s likely very few members of the Class of 2017 will provide an immediate impact in the NHL. Still, plenty of prime talent is available, especially on the blue line, as evidenced by Foote’s ranking.

While general manager Jason Botterill said last week he’s open to doing anything with the eighth overall pick, the Sabres desperately need defensemen for their organization.

Grabbing one of the ones mentioned above might be Botterill’s best and safest option.

“There’s some really solid defensemen in this draft, there’s no question about that,” Gregory said. “You can sort of pick the defenseman you may want. The one thing I love about our game is how it’s trending. Even the big defenseman that is physical, that is a force in front of the net, you’re starting to see those guys possess excellent ability to transition the puck or be part of the offensive attack.

“I think you’re seeing as the game evolves so do the players. You’re seeing that with the defensemen this year.”

Here’s more on some of the top defensemen in Friday’s draft:

Yes, Makar, played in a lower junior league again to keep his NCAA eligibility (he plans to attend UMass this year). But Makar, a slick offensive presence, dominated the AJHL (24 goals 75 points in 54 games) and performed splendidly against better competition in tournaments.

“He gets a lot of buzz for the right reasons just because he is such a dynamic player,” Gregory said. “… He’s playing in a league he should dominate. He did what he was supposed to do in that league. He absolutely owned it every game, every shift.

“But then he got into situations where he played with his peers in tournament play and he still did it.”

The Finn, who had 19 goals and 61 points in 60 games, isn’t afraid to get up in the play and create offense.

“This is one of those dynamic, exciting players to watch,” Gregory said. “He has a little bit of a high-risk, high-reward (style), but the thing that I liked about him is that I think he understood, ‘OK, I’m taking a risk.’ (He) knew that he had to get back whenever things didn’t work out. Most of the time the decisions were good ones and he would create stuff.”

If the Finn, a strong two-way player, had the exposure of a North America prospect, he would probably be rated higher.

“I’ve heard some people say if he had the exposure he might even be topped out at No. 1,” Gregory said. “They like him that much.”

The Swede endured a rough season, battling mono early on and playing for five teams as he searched for playing time.

“Playing with five different teams, it was pretty hard to find my game,” Liljegren said recently at the NHL Scouting Combine inside HarborCenter.

Still, the two-way defenseman believes the adversity helped him.

“It’s good for me,” he said. “I think I grew as a person. But you obviously want to play on the same team on the same level. It was frustrating sometimes.”

The status of goalie coach Andrew Allen, according to the paper, is unclear. Allen’s goalies have often spoken positively of him.

Pu, a third-round pick in 2016, enjoyed a huge season with the Ontario Hockey League’s London Knights, scoring 35 goals and 86 points in 63 games.