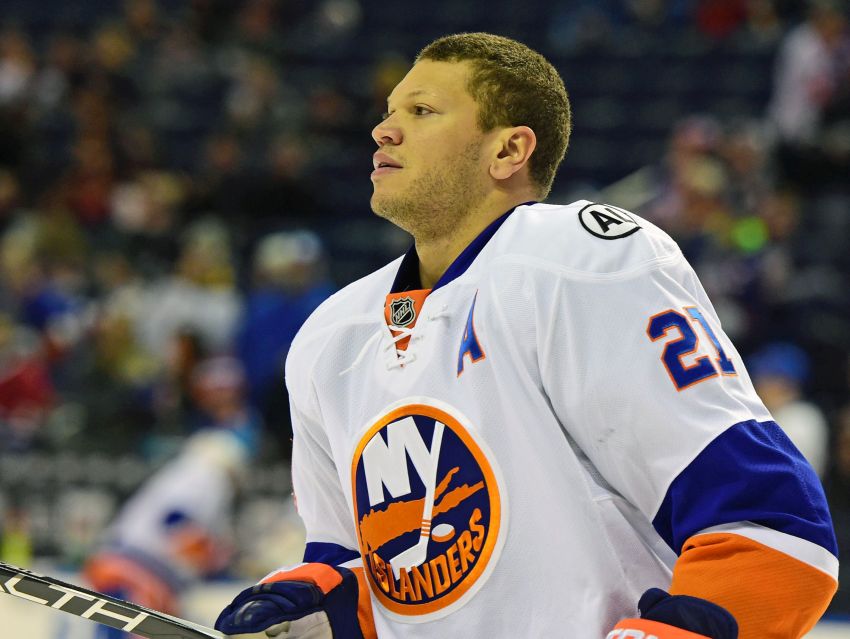 Kyle Okposo knew he had to change his approach to hockey. ©2016, Dan Hickling, Olean Times Herald

BUFFALO – Three years ago, after his production plummeted to four goals and 24 points in the lockout-shortened 48-game season, Kyle Okposo started fretting.

Okposo knew he had accomplished some good things in his four seasons with the New York Islanders. Still, after following up a 24-goal campaign with an awful season, he learned he lacked consistency.

So he seriously examined his career.

“I just felt that I was kind of being pushed into a being average, and I didn’t want to do that,” Okposo said Friday after signing a seven-year, $42 million contract with the Sabres.

Okposo, 28, said he decided to “change some things around in my game.” He switched his nutrition and training and started working with a skills coach.

“That really helped my game, made me a more consistent player,” the winger said.

The Minnesota native immediately saw results from his new approach, scoring a career-high 27 goals and 69 points in 2013-14.

Okposo has 67 goals and 184 points in 210 games (.80 points a game) during the last three seasons, the 26th-highest point total in that span, according to hockey-reference.com.

That’s an average of 22 goals and 61 points a season, strong numbers that made the seventh overall pick in 2006 arguably the best player available in free agency.

“I feel like the last three years I’ve been on a better track,” Okposo said.

General manager Tim Murray is confident Okposo, who the Sabres have slotted to play beside centers Jack Eichel or Ryan O’Reilly on the first or second line, will keep compiling similar numbers.

“His point totals in the National Hockey League and the way he’s played have dictated that he’s a first- or second-liner player since he came in, and I just continue to see that game in his,” Murray said. “He’s an athletic kid. We all worry about term on free agency, but he is a young free agent at 28.”

Eventually, as he approaches his mid-30s, Okposo’s production will likely decline.

“We do our homework, obviously,” Murray said. “We don’t feel like he’s one of the guys you’re going to see a massive drop off. You might see an eventual, gradual (decline). … We think he’s got the smarts and the athleticism and the skill that he can continue to do what he does for more than three years of the seven-year deal.

“We see him going through this deal and being a pretty productive player. … We think at the end of this contract he’s still going to be a good hockey player.”

The term and money a GM awards a budding star in his second contract rarely pleases him. But Murray was happy with the three-year, $4.8 million deal defenseman Jake McCabe, 22, signed Thursday.

“We worked a long time on Jake’s deal, went back and forth on term, on money and … I think both sides are happy with (it),” Murray said. “We’re extremely happy to have three years versus one year or a qualifying offer or whatever.

“So it gives him some stability. It gives us three more years to help him get to the top end of his game, and we think his top end is pretty high in this league for the style of player that he is.”

Other than Reinhart, McCabe was Buffalo’s biggest surprise last season, averaging just over 19 minutes in 77 games. Many thought the Wisconsin native would start 2015-16 in the minors.

The Sabres, of course, will have to give a massive contract to defenseman Rasmus Ristolainen, the team’s top restricted free agent, this summer.

Based on other lucrative contracts top young defensemen have signed – Seth Jones received six years and $32 million and Aaron Ekblad received eight years and $60 million – the Sabres will likely have to sign Ristolainen to a long-term deal worth around $5 million a season.

Murray seems confident a deal will get done. He said Ristolainen said he wants to stay in Buffalo.

Murray, as he often does, prefaced some comments.

“He might get mad at this,” he said Friday referring to Williamsville native Cole Schneider, who signed a two-way contract Thursday worth $600,000 and $300,000.

Still, Murray went ahead. He thinks Schneider, who played his first two NHL games in April, could make a jump following a strong summer of training supervised by the Sabres’ staff.

“He’s been in our gym since the middle of May,” Murray said. “He’s a very talented, smart hockey player, and I think maybe his conditioning a little bit and habits have maybe been the one thing that kept him out of the National League.”

The 6-foot-1, 198-pound Schneider, 25, has scored at least 20 goals and 50 points in the last three AHL seasons. Murray knows the forward from the Ottawa Senators organization.

“He’s a top, top player at the American League level, and we need … Rochester to be better,” Murray said.