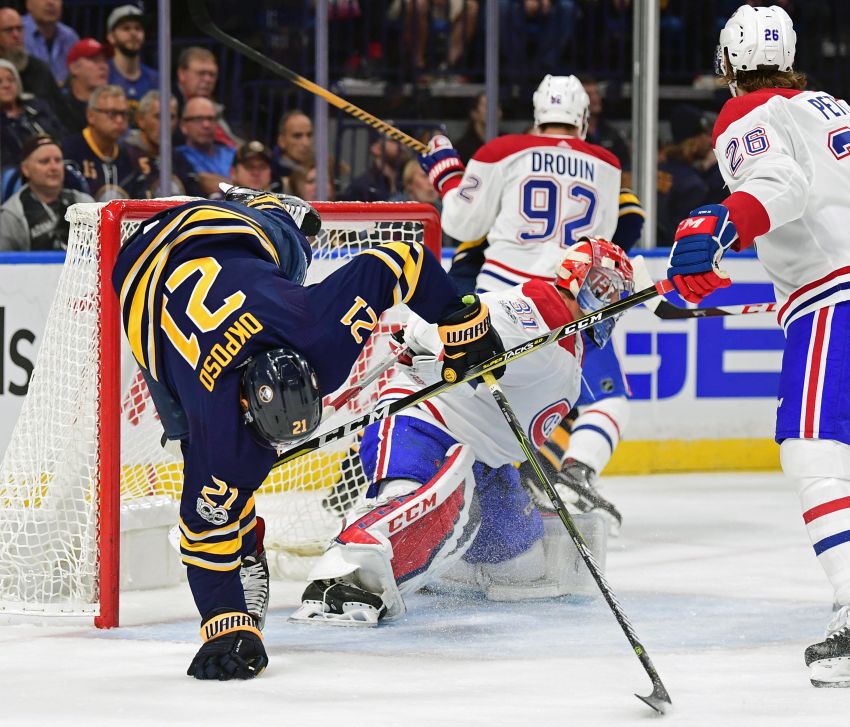 BUFFALO – A day after getting benched, Sabres winger Kyle Okposo was noticeably better in Saturday’s 5-4 come-from-behind overtime win in Boston.

Okposo looked engaged and more like the veteran who usually averages more than 20 goals and 50 points a season.

After the Sabres roared back from three goals against the Bruins, Okposo nearly won it in the final minutes, hitting the crossbar from the slot.

“Kyle was fantastic, moving his feet, winning a lot of puck battles,” Sabres coach Phil Housley said this afternoon inside KeyBank Center. “He had chance to win the game there at the end, just finding a way to get involved. He might not have been on the score sheet, but certainly his game went to another level.”

Still, despite playing 16 minutes, 31 seconds – Okposo only received one shift in the third period Friday and skated less than 10 minutes – he wasn’t thrilled with his performance.

“I played better,” Okposo said, who has just one assist in seven games this season. “I’m still looking for more, looking for production. It’s something I’ve prided myself on the last number of years, and it’s not there right now. I thought the work was better, definitely, and (I) created some opportunities, had some chances.”

More chances as a team helped the Sabres earn only their second win and triumph when after looked finished down 4-1 late in the second period.

More chances as a team helped the Sabres score a season-high five goals and triumph when they looked finished down 4-1 late in the second period.

“When you come from behind, it always kind of brings the group together a little bit,” Sabres winger Jason Pominville said. “Those are fun wins that are kind of usually unexpected when you’re in that position.”

“It’s just intriguing to see them skating,” he said.

Defenseman Victor Antipin, a healthy scratch all four games of the Sabres’ recent road trip, has impressed Housley since returning to the lineup two games ago.

Housley awarded the Russian rookie, 24, a spot on the team’s No. 1 power play during Monday’s practice. The power play has struggled this season, allowing more goals (six) than it has scored (five).

“He’s made the best of his opportunities since he’s got back in the lineup,” Housley said. “He’s moving his feet, skating, defending well – all the things that we’re looking for from him. He’s just sort of moving up and earned a spot to try on the power play. His puck movement has been really good.”

One thought on “Sabres’ Kyle Okposo responds to benching”