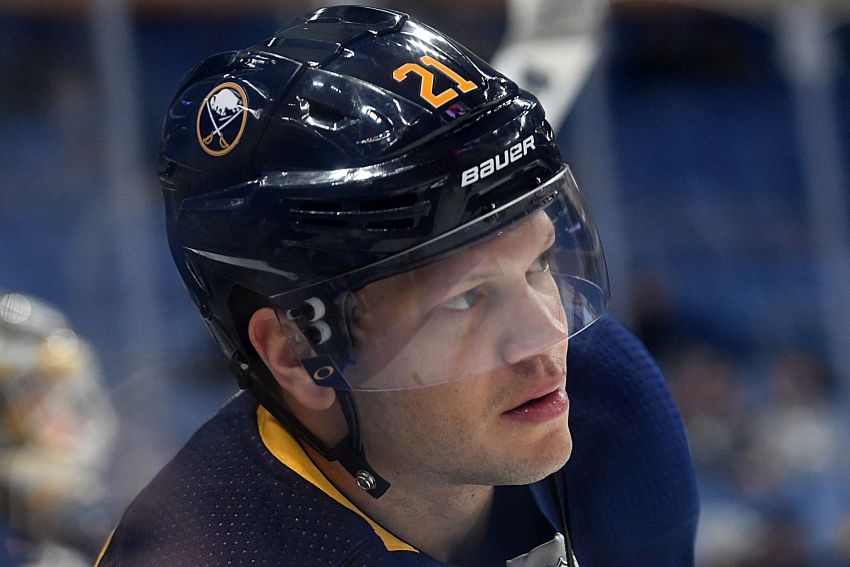 BUFFALO – In his 12-year career, Kyle Okposo has never played so little over a four-game stretch. The Sabres winger hasn’t even cracked the 12-minute mark.

Okposo, 30, received more minutes as a teenage rookie in 2007-08 and in 2012-13, when he struggled so badly he scored just four goals in the lockout-shortened season.

Despite averaging only 11 minutes, 13 seconds over the past four outings, the likable veteran has scored a goal in three straight contests entering tonight’s tilt against the Calgary Flames inside KeyBank Center.

“I’m not playing that much right now, but the team’s playing well,” Okposo, who has averaged 14:38 on the ice this season, said Monday. “We’re doing a lot of good things. I think we’re growing as a group. I just want to work on even being more dynamic in offensive zone, offensive side of the puck.”

After two rough seasons, Okposo sounds happy. Even with his ice time shortened – he averaged 17:02 a game last season – he has a spot beside slick rookie center Casey Mittelstadt and skates on the power play. And for the first time since Okposo signed a seven-year, $42 million contract in 2016, the Sabres are winning.

When Okposo left the Islanders, he said he believed the Sabres were closer to the Stanley Cup than New York. Last season, the Sabres finished dead last.

“When you come in, you don’t know what’s going on behind the scenes,” said Okposo, who scored the late power-play winner in Thursday’s 4-3 victory against the Montreal Canadiens. “I think that we just had a lot of growing to do as a group and as a team. We’re still doing it.”

These days, everything feels fresher around the Sabres. A slew of notable offseason moves, including drafting defenseman Rasmus Dahlin first overall, certainly helps. But the commitment Okposo and others made to change has also transformed them from an also-ran into one of the NHL’s biggest surprises.

“You can see the signs of the work that we’ve put into it, especially the latter half of the summer and training camp, we did a lot of things in order to become a tighter-knit group, and everybody’s committed to doing the right things on and off the ice,” Okposo said. “I think that’s went a long way in our game and the way we play.”

Following a poor season in which he started slowly and compiled a ghastly minus-34 rating, Okposo spent the summer focusing on his skills and skating. A year earlier, as he recovered from a scary concussion he suffered late in 2016-17, he couldn’t do much of anything during the offseason, and it showed early.

Okposo scored his first goal in his 11th appearance in 2017-18. Through 11 contests this season, he has scored three goals and seven points, a 22-goal, 52-point pace over a full campaign. He also has a minus-6 rating.

So far, thanks to his work in the summer, he feels a difference.

“I feel like I’m in more control and I’ve been able to not get stuck so much,” Okposo said. “That was the biggest thing I was working on, not getting stuck. I’m probably taking less strides to get where I want to go. I’m just trying to have my form be really good.

“But when you’re playing, you’re not really thinking about your skating, right? You want it to become second nature. I try not to think about it, but in practice, definitely, I’m trying to emphasize the good habits, the technique.”

Okposo, who doesn’t kill penalties, could eventually be rewarded with more minutes.

“I really like Kyle’s game,” Sabres coach Phil Housley said. “It’s tough because you have power-play and penalty-kill situations, it breaks up the flow of your bench. You try to find him more minutes, but it’s just the way the games have been going. He’s going to get his minutes if we stay out of the box and can roll four lines.”