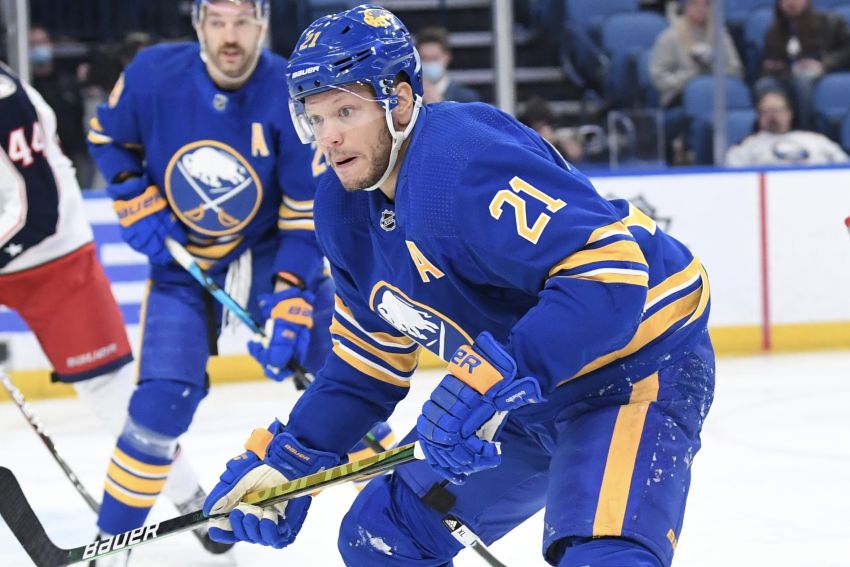 BUFFALO – Sabres winger Kyle Okposo left Monday’s practice early and was being evaluated after injuring his left leg during a drill.

The veteran appeared to step on the puck during a rush and fell to the ice. Coach Don Granato said the Sabres would know more later Monday.

Okposo, 34, was injured hours after the Buffalo chapter of The Professional Hockey Writers’ Association named him the Sabres’ 2021-22 nominee for the Masterton Trophy.

Okposo, who has battled injuries in recent years, including concussions, has enjoyed a stellar comeback season, scoring 21 goals and 45 points in 74 games.

The American, an alternate captain, has earned praise for his leadership abilities as the upstart Sabres have showcased growth this season.

Granato said Anderson was also being examined Monday. An undisclosed injury kept him out of Saturday afternoon’s 5-3 win over the New York Islanders.

The Sabres have today off. They play a road game Thursday against the Boston Bruins and close the season Friday at home versus the Chicago Blackhawks.

Granato, whose Sabres also had Sunday off, said given the team’s busy schedule over the past several weeks, they can’t practice four straight days before they face the Bruins.

“It’s tough on the psyche and everything else,” Granato said. “And I think even three practices is too much with the number of games they’ve played. … They had a lot of energy and excitement skating today, which is always nice to see as a coach. You go into practice this time of year, and if a guy’s sore and everything else and the weather turning, you’re trying to figure out, OK, what’s practice going to be like?

“And now that we finished, I’m pretty happy with the way it was, I thought the guys were pretty on point and very enthusiastic. … You talk about culture all year long, and that showed us that it was strong out there to me.”