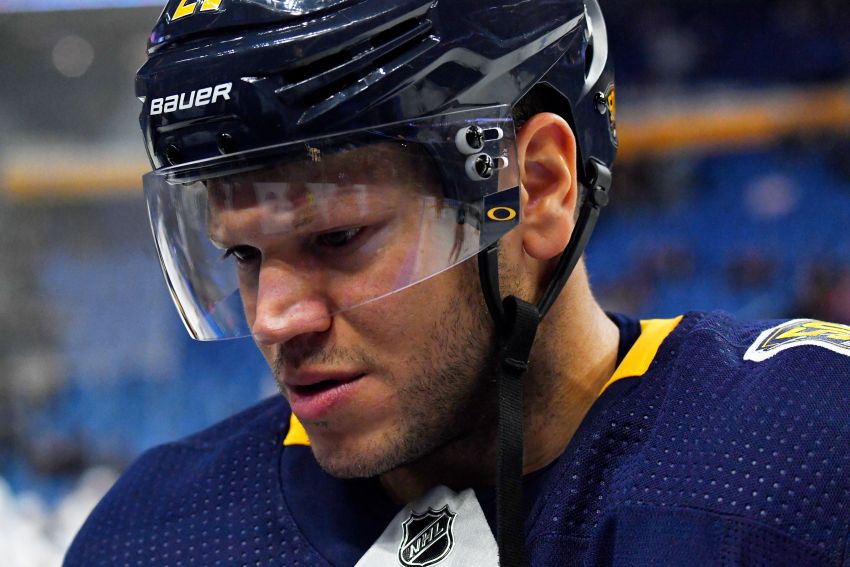 BUFFALO – Kyle Okposo grew up a rabid basketball fan in the 1990s and said he played the sport “way before” he took up hockey. The Sabres winger still loves talking about the NBA of his youth and its stars.

So the death of 41-year-old basketball legend Kobe Bryant has impacted Okposo. He sounded emotional this afternoon discussing Bryant, who died in helicopter crash Sunday in Los Angeles with his 13-year-old daughter, Gianna, and seven others.

Okposo watched Bryant transform from a rookie out of high school into one of greatest players ever.

“(Michael) Jordan was in his heyday and then Kobe came in, this 18-year-old kid, just this pretty raw talent,” Okposo said inside KeyBank Center. “And all of a sudden, he grows into this extremely special, elite player, and all you heard about was his work ethic and you could see his passion every time he stepped on the court.”

Bryant, who spent his entire 20-year career starring for the Los Angeles Lakers, was a global icon who transitioned into a slew of successful post-basketball ventures following his retirement in 2016, including the Mamba Sports Academy.

“It hit hard yesterday, just because of his impact and his mentality,” Okposo said. “Everybody talks about the Mamba (Bryant’s nickname) mentality, and he had it every day. Just watching him from afar and how competitive he was and how fiery he was, it was amazing to see kind of his whole career and what he did.

“And then to transition to becoming a family and to having four daughters and myself about to have my fourth child in April, it really hit home with him in the crash and passing away with his daughter. Just all the things he was doing for women’s basketball with his daughter and the schools, the businesses, he was just getting started in his life, his life after basketball, after playing.

“To lose somebody like that, he was a larger than life figure. He was a titan, he was a global icon and he will be sorely missed.”

When Okposo learned during a break in Sunday’s practice inside LECOM Harborcenter that Bryant had died, he was stunned.

Okposo said he talked to a lot of different people about Bryant on Sunday, including his wife, Danielle.

“My wife and I were sitting on the couch last night (and) it’s like 10 times, ‘I can’t believe he’s gone,’” he said. “Like, my wife knows nothing about basketball, she could care less. But she knew Kobe Bryant and kind of understood the impact he had on especially Los Angeles but on a global scale. So just amazingly sad.”

Okposo said he watched Bryant play in person once in Philadelphia. The New York Islanders happened to be staying at the same hotel as the Lakers, and he ran into Bryant in the elevator.

“I’ll never forget it,” Okposo said. “(I) didn’t say anything to him, but he just had that presence about him. When he was in the same room, you knew.”

“Somebody like myself, he impacted so much and he would never know that,” said Eichel, who called Bryant one of his favorite athletes.

Eichel said he watched the documentary “Kobe Bryant’s Muse” when he suffered a high ankle sprain.

“I think you watched how dedicated he was to his craft, it made you want to be better,” he said. “Just how inspiring of an athlete he was, I think this is going to take a long time for everyone to kind of move on from. Time’s going to be the best healer for people.

“It’s just, I don’t know if there’s been a tragedy quite like this in sports, in my memory.”

Sabres winger Jeff Skinner, out the last 10 games with an upper-body injury, practiced again today in Harborcenter and will play Tuesday against the Ottawa Senators at KeyBank Center, coach Ralph Krueger said.