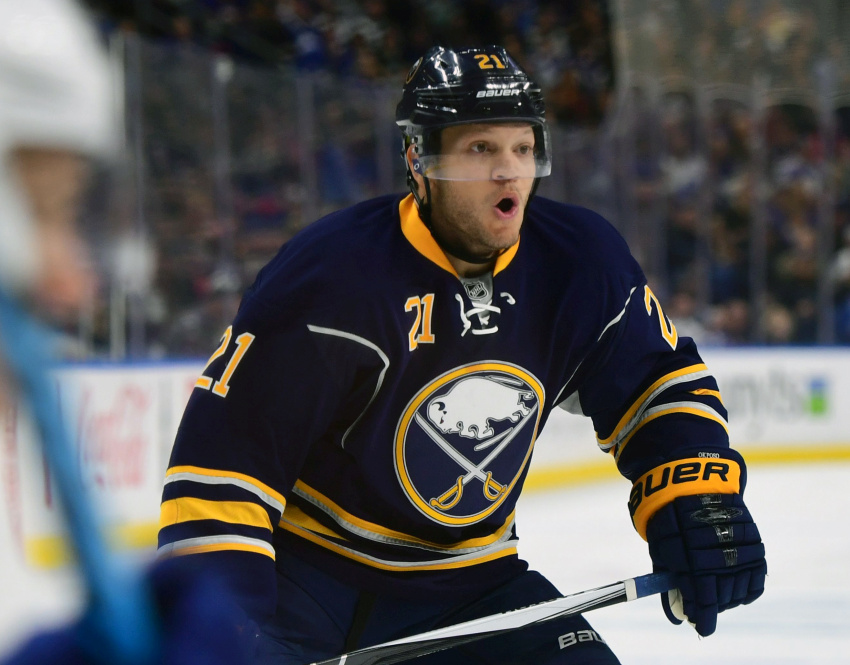 BUFFALO – Kyle Okposo’s quick acclimation and productive start have been welcomed by the Sabres, whose previous high-priced free agents quickly turned into disasters.

Remember Christian Ehrhoff? How about Ville Leino? Both lasted three seasons before the Sabres exercised buyouts. Both are out of the NHL, now cautionary tales for the dangers of free agency.

The team’s old regime, it should be noted, committed those mistakes.

Then there’s Okposo, 28, quietly one of the NHL’s most consistent and productive forwards. If he replicates his usual numbers – that’s an average of 22 goals and 61 points over the last three seasons – the seven-year, $42 million contract he signed July 1 might look like a steal.

It’s early, but Okposo’s on track for a career season. He has five goals and eight points, both team highs, in 11 games entering tonight’s tilt against the Ottawa Senators inside KeyBank Center.

“His leadership, his play on the ice (and) his goal-scoring ability is everything we want to have in our lineup,” Sabres coach Dan Bylsma said last week. “He’s … proved that every time he’s stepped on the ice this year.”

Why has the affable Okposo meshed so quickly?

“It’s a fun-loving group of guys, an easygoing group,” he said Sunday. “I’m not a huge personality. I just kind of go about my business and do the right things.”

The American has produced from the get-go. He scored 2:37 into his debut Oct. 16 in Edmonton, a 6-2 win, adding an assist five minutes later. He ended his longest pointless stretch – only two games – by scoring the tying goal late in Saturday’s 2-1 win in Ottawa.

That next level, perhaps 30 goals, would be significant. The Sabres haven’t had someone reach that mark since Jason Pominville in 2011-12.

Given Okposo’s consistency and the talent surrounding him, it’s an achievable milestone.

What would be growth for Okposo, who has scored 18 or more goals six times and 45 or more points five times? He wouldn’t mention a number.

“I try to take inventory every game I play,” he said. “I just want to grow as a player. Obviously, when you’re playing well, it seems like points, production goes up. … I feel like there’s just opportunities for more. … Once you get satisfied in your game, that’s when you stop getting better as a player, you start to regress.”

Okposo has been playing beside No. 1 center Ryan O’Reilly, who also has eight points. As a first-liner with the Isles, Okposo often skated with John Tavares. That helped Okposo develop a greater appreciation for O’Reilly, the Sabres’ only NHL All-Star last season.

“We were out there on the ice against him a lot,” Okposo said. “He just made a lot of plays, made life difficult for us. When you play with him, you realize how good he is offensively, the little plays he makes.

“He’s such an easy guy to play with,” Okposo said. “He’s been definitely a lot of fun to get to know.”

Notes: Speaking on his weekly appearance on WGR, Bylsma said winger Evander Kane, out since cracking three or four ribs opening night, will skate with his teammates this morning and could play this week. … The Sabres had Tuesday off.