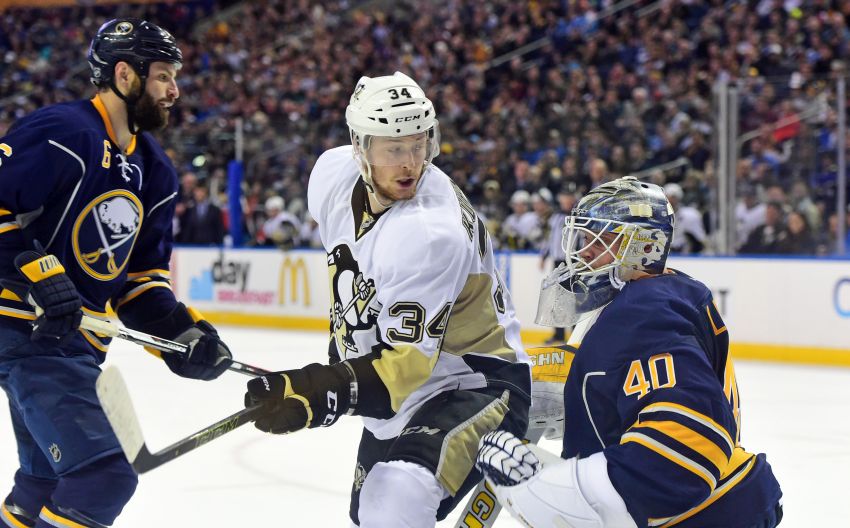 BUFFALO – For about 20 minutes, the Sabres responded to the loss of No. 1 center Ryan O’Reilly, their most versatile and important asset, by playing one of their best first periods in weeks.

But by the second period of Sunday afternoon’s 4-3 loss to the Pittsburgh Penguins, O’Reilly’s absence became very evident as the Sabres began chasing the game and fell behind.

“He’s your No. 1 guy, and that’s something … you can’t replace,” Sabres coach Dan Bylsma said after announcing O’Reilly will miss three to four weeks with a lower-body injury he sustained in Friday’s 4-0 win in Columbus, a game he finished.

O’Reilly could return this season, Bylsma said. The 25-year-old, who has 17 goals and a team-high 49 points, was wearing a boot on his right leg following the game. Bylsma said O’Reilly was injured on a play “you probably wouldn’t catch it if you watch the game again.”

Bylsma’s right, the Sabres can’t simply replace O’Reilly by recalling, promoting or acquiring a player. The team’s lone All-Star plays more than any NHL forward and excels in virtually every facet on the ice, including the circle, where he’s taken a league-high 1,489 faceoffs this season.

“You need a big draw, he’s somebody stepping over the boards, and that’s something that we’re going to miss and we’re going to have to replace,” Bylsma said. “I think you see the importance of that in our game tonight.”

O’Reilly’s strong player earlier this season quickly quieted critics who said the Sabres gave up too much for him and overpaid him with a seven-year, $52.5 million contract extension.

“Obviously, it’s a huge loss for us,” Sabres goalie Robin Lehner said. “He’s a world-class player and a leader in this room. It’s an opportunity for other guys to step up and take over.”

Against superstar Sidney Crosby and the potent Penguins, the Sabres took over the first period after falling behind early. Zach Bogosian’s power-play goal tied it 13:48 into the contest, and the Sabres outshot the Penguins 15-6 in the period.

Then they imploded in the second period, getting outshot 16-6 and outscored 2-0 before the bipartisan capacity crowd of 19,070 fans inside the First Niagara Center.

Clearly, a big faceoff win or a cool play under pressure from O’Reilly would’ve greatly helped the Sabres, who have only 55 points and 11 home wins.

“One of our better first periods in a really long time,” Bylsma said. “I think we were carrying the play, we were pushing forward with our play. Then the second period, you kind of get in the opposite direction, a couple turnovers, we get their speed coming at us.

Eichel has 17 goals and 41 points. Reinhart, meanwhile, has 18 goals and 27 points. He shifted from the wing back to center, his natural position, beside Evander Kane and Justin Bailey, who was recalled before the game. Bylsma said Reinhart will get a “good look” in the middle.

“You can’t insert a Justin Bailey and replace what Ryan O’Reilly gives you,” Bylsma said. “Where we’re at right now in the season, we’ve been playing (well), points in eight of 10 before tonight’s game and winning some hockey games. He’s a huge part of that and we’re going to miss that.”

Crosby assisted on Patric Hornqvist’s goal 9:09 into the game.

After Scott Wilson, Phil Kessel and Matt Cullen (short-handed) put the Penguins up 4-1, Sabres captain Brian Gionta scored on the power play 8:05 into the third, his first goal in nine games. Bogosian scored again with Lehner off for an extra attacker in the waning seconds.

The Sabres, believe it or not, missed an opportunity to win three straight home games in regulation for the first time since March 2011.