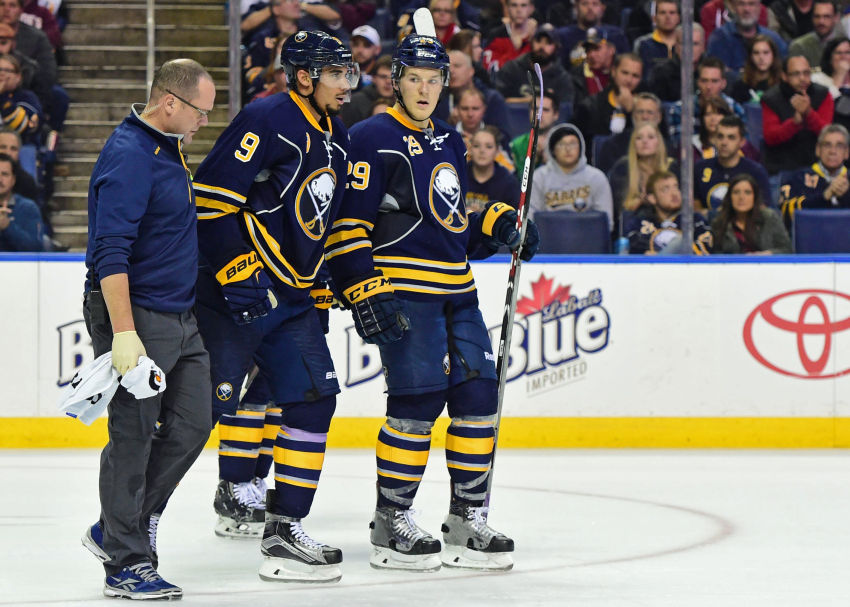 BUFFALO – The bad news, in some odd way, was still good for the struggling Sabres. A left MCL injury will only sideline winger Evander Kane four to six weeks, coach Dan Bylsma said.

At least the former 30-goal scorer will play again this season.

After New Jersey’s David Schlemko hit Kane hard into the corner boards late Saturday in the Sabres’ 4-3 loss, it appeared he might be finished as he writhed in pain on the ice before skating off gingerly.

Kane doesn’t need surgery, Bylsma said Monday after the Sabres prepared for tonight’s road game against the Philadelphia Flyers. He couldn’t offer any other injury specifics.

Still, a 2-6 team that has scored only 15 times could be without Kane for 20 games

“It’s big,” Sabres center Ryan O’Reilly said about Kane’s injury. “He adds a lot – his speed and the way he shoots the puck, just the way he plays, he’s a physical guy. It’ll be a loss, but as much as it hurts to see a guy go down, we’ve got to step up and we all have to help out.”

Assuming Kane returns by early December, he will have played only eight games in about a 10-month span. In February, he had season-ending shoulder surgery just days before the Sabres acquired him from Winnipeg.

Instead of promoting a proven scorer like Matt Moulson to fill Kane’s role, Bylsma elevated Nick Deslauriers, a regular third- or fourth-liner with seven NHL goals, to the left wing beside O’Reilly and Ennis. The gritty Deslauriers skated with the two briefly Saturday.

“I just need to stick to my game and give them a little bit more space on the ice,” Deslauriers said.

Ennis believes Deslauriers is “probably the most liked guy on the team.”

“He brings a lot of energy, he’s a great kid,” he said. “He’s going to work and he’s got a lot more skill than people give him credit for. He’s actually a very, very athletic kid. You think, ‘Oh, he’s just a tough guy.’ But no, he skates fast, he’s got really good hands.

“He’s just kind of in a situation where he’s had to play that fourth-line role. But now he’s got a good opportunity to show a lot of people what we see in him, and that’s some sneaky skills.”

Deslauriers quietly possesses a heavy shot, something he could utilize beside two proven scorers.

“I don’t want to say this too loud,” Bylsma joked, “(but) he does have a little finish in his game.”

The Sabres as a team have showcased little finish this season. Despite pumping 30.4 shots on net a game, 16th in the NHL, they rank 27th in goals. They’ve limited opponents to only 25.8 shots a game, third in the league.

Clearly, some things are finally going right for the Sabres. That’s why the losses they’ve experienced this month are far different than the ones they endured the past two seasons, when teams repeatedly annihilated them.

“We’re in games,” Ennis said. “The last couple years we’ve been out of games early. We should be at least .500, in my opinion, right now. We’ve let games slip away. … Good teams learn and know how to win in situations. … Right now, we’re not confident we’re going to win.”

O’Reilly said the Sabres need to work on small details.

“I don’t think we’re looking at our thing going like, ‘Gosh, we’re nowhere near we want to be,’” he said. “But still, the results we have, we’re still not where we want to be.”

To fill a spot Monday, the Sabres recalled forward Tim Schaller from Rochester, where he has one goal, two points and a minus-7 rating in six games with the Americans. Schaller skated as an extra on the fourth line Monday.

Sabres winger Marcus Foligno, sidelined by a charley horse Saturday, practiced Monday and could play tonight. Foligno said he had a “dead leg” above the knee after hitting the boards early Friday.

Notes: Bylsma didn’t announce his starting goalie for the Flyers. Rookie Linus Ullmark made his NHL debut Saturday. … Bylsma said Bogosian, out since early in training camp, is getting better and increasing his workloads. Bogosian only practiced with the team once earlier this month. … The Flyers will honor former Sabres star Daniel Briere, who retired in August, prior to the game.

One thought on “Sabres know Evander Kane’s loss will hurt”