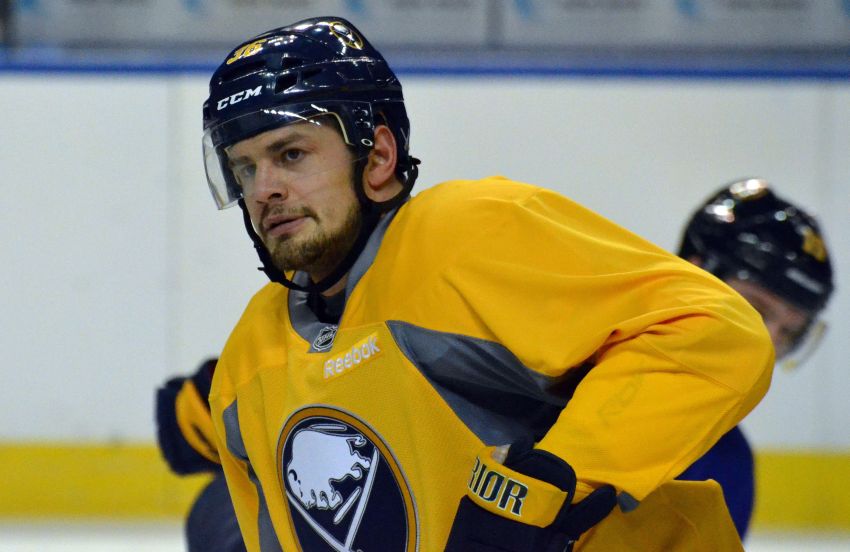 BUFFALO – If Sabres agitator Patrick Kaleta has his way, he’ll return to the lineup tonight against the Montreal Canadiens

Forget that the winger left the First Niagara Center on a stretcher last Tuesday after injuring his neck and spent the night in the hospital. Forget that he’s only been through one non-contact practice. Forget that coach Lindy Ruff wasn’t sure if the 26-year-old has even been cleared to play yet.

“I’m available whenever the coaches may need me, no matter what the case may be,” a smiling Kaleta said Wednesday. “I have a high pain tolerance. I can battle through whatever.”

“I think in all fairness that’ll be a coach’s decision and I’ll make a wise one on that,” Ruff said about Kaleta returning so soon.

Kaleta, who has a long history of neck injuries, feared for the worst after Toronto’s Mike Brown hit him into the boards as he turned early in a 4-3 overtime loss.

Ruff wants the ultra-aggressive Kaleta to calm down a bit on the ice to preserve his career.

“I think there’s an obligation that Patty has to be … a little bit more careful in some situations (like) …. not getting his back turned at all costs, trying to protect the puck and take a blow that maybe he doesn’t have to take,” Ruff said. “He’s going to have to be better at (it). That’s just for his own well-being and his career. That’s a fragile area.”

Sekera, Ruff said, is progressing and can exercise off the ice.