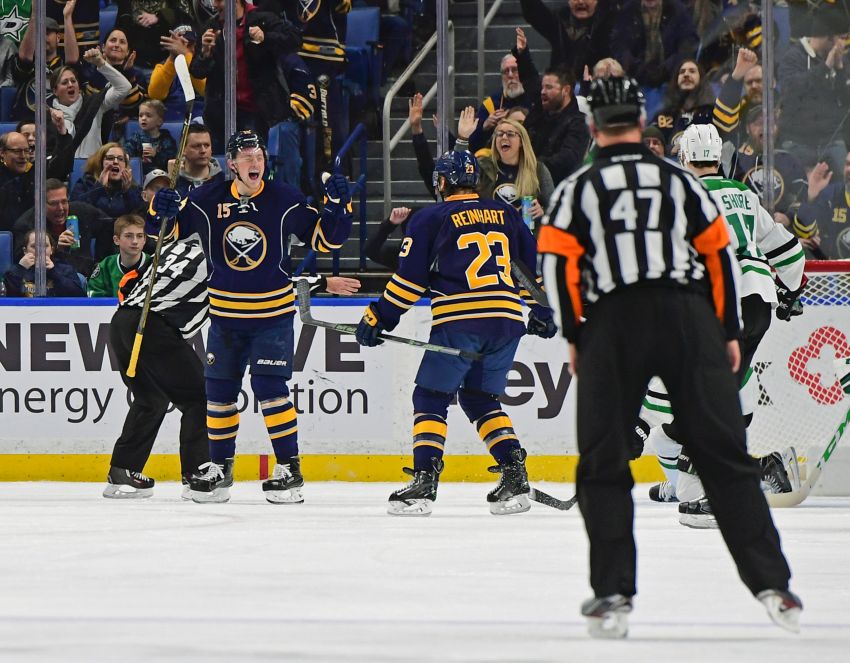 BUFFALO – Tyler Ennis’ slick return to the Sabres will rightfully grab most of the attention from Monday afternoon’s 4-1 win against the Dallas Stars.

The veteran scored 19 seconds into the Sabres’ third straight win at KeyBank Center, then followed up later in the period by nearly scoring a crazy lacrosse-style goal.

But contributions throughout the lineup helped them end a two-game losing streak that was magnified by Friday’s wretched 5-2 loss in Carolina.

The Sabres, a low-scoring team that often sits back, scored four goals for the fourth time in seven contests.

Center Jack Eichel scored twice, his ninth and 10th goals, ending a four-game drought. Defenseman Jake McCabe scored his first goal this season – “Got the monkey off my back,” he said – and just the fifth of his career. Goalie Robin Lehner quietly made 31 saves.

“A win’s nice, but it’s been a roller coaster,” McCabe said. “It’s been up and down and we can’t have that anymore. It’s great to get wins, but we’ve got to start stringing them together.”

Against the potent Stars, the Sabres dictated the pace before the capacity crowd of 19,070 fans.

“They’re a high-octane team,” Eichel said. “They push the puck, they play with it, the D like to get up in the rush and make plays. We knew it’d be important to put a lot of pressure on them and try to make it a tough game.”

The Sabres made it tough early. Following Ennis’ goal, McCabe intercepted Jamie Benn’s clearing pass in the slot and scored on the power play at 12:34.

Radek Faksa cut it to 2-1 before the period ended. Dallas appeared to tie it early in the second period, but the Sabres challenged if the Stars were offside, and the goal was disallowed.

“Kind of a breath of fresh air to not have that go in and get back to playing a game we were playing really well in,” Sabres coach Dan Bylsma said.

The Sabres cruised from there. Eichel, who narrowly missed two earlier chances, scored late in the period, completing what Bylsma said was the team’s best power play all season. Eichel, who had a career-high nine shots on goal, later sealed the game with an empty-net breakaway.

“It seemed like I had a lot of chances in the first,” Eichel said. “I told myself if I came out here and shot the puck a lot I think I’d get one. I think in the past few games I was just trying to be a bit too cute … and you’re not going to score unless you shoot it.”

By the end of the second period, Benn, one of the NHL’s top talents and Dallas’ captain, lost his cool, first smashing a stick on the ice, then breaking two more Bo Jackson-style across his leg on the bench.

“Pretty bad,” Benn said about his play. “That’s taking it easy on myself, too. I wish I could say how I really feel but it’s probably not good for TV.”

The Sabres, who often struggle to close out games, gave the Stars little during the third period.

“I just think we definitely managed the puck a little bit better for a full 60,” Sabres winger Kyle Okposo said. ‘We really limited our mistakes, and when we made mistakes, it seemed like guys were covering up for other guys. We just always had guys thinking defensively.”

They’ll have to do that again in tonight’s road tilt against the upstart Toronto Maple Leafs.

The game should mark the first-ever NHL meeting between young American stars Eichel, 20, and Leafs rookie Auston Matthews, 19, one of the league’s top talents just 41 games into his career.

The Arizona-raised Matthews has 21 goals and 37 points, slick numbers that tie him with Winnipeg’s Patrik Laine for the rookie lead.

The Leafs, the league’s worst team last season, have won eight out of the last 10 games, vaulting up to a playoff spot.

“It’s a good test for us,” Eichel said. “Toronto’s been really hot lately. We’ve just got to go up there and play some of the way we did (Monday).”