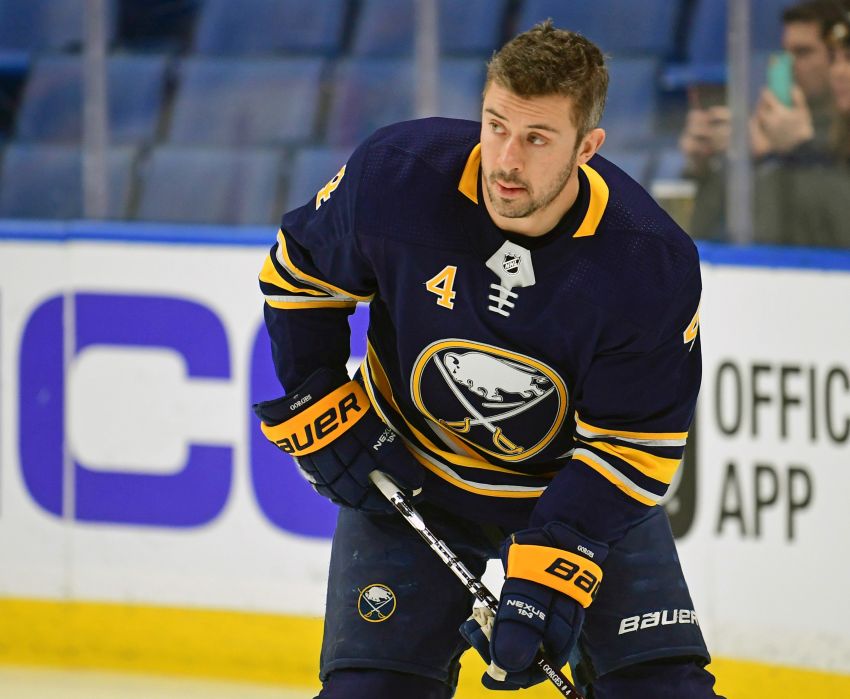 BUFFALO – Josh Gorges said he wonders if this is it, if he has just about reached the end of his NHL career. Right now, the graying 13-year veteran can’t even keep a regular spot on the Sabres’ weak defense corps.

Gorges, 33, has become a spare part on the league’s second-worst team, sitting out 10 of the last 13 games as a healthy scratch entering this afternoon’s tilt against the Washington Capitals.

Just a week before the NHL trade deadline, the proud Gorges said he knows the Sabres are likely trying to deal him. Even with his best days behind him, he could offer a team some valuable depth or an accountable presence to help in the dressing room.

Of course, trades are difficult to complete. So far, Gorges has played only 25 times in the final year of a contract paying him $3.9 million this season.

“You look around and teams don’t have a lot of room, trades are tough to make nowadays, and for a guy that hasn’t been in the lineup, what do other teams see that as?” Gorges told the Times Herald following Sunday’s optional practice inside KeyBank Center. “There’s a lot of different circumstances that are playing out.”

So thoughts about his uncertain future – “Everything kind of goes through your mind,” he said – have been running through Gorges’ head.

“Do you get traded? What happens there? You think about your family situation. Do I not see my kids for a little while, my wife?” he said. “There’s a lot more to it than just the hockey side of things you think about.”

Naturally, Gorges said this season “definitely hasn’t been easy.” It was clear long before the campaign began he would have a reduced role.

The Sabres fired general manager Tim Murray, who acquired Gorges in 2014, and coach Dan Bylsma, who regularly skated him more than 20 minutes, in April.

Prior to this season, Gorges hadn’t been a healthy scratch in about 10 years. Moving in and out of the lineup and watching for stretches has sapped some confidence.

“I believe this game is all mental,” Gorges said. “You got to be confident in what you’re doing when you get out there, you got to be able to play without hesitation, you got to play instinctually, and then when you get in this type of position, a lot of times you’re thinking when you’re out there, which isn’t a good thing. You know confidence isn’t at an all-time high, anything that happens out there, there’s a mistake here, a mistake there, that could be it, you’re going to be out again.”

So would Gorges, who entered the league with the San Jose Sharks in 2005-06 and later became a mainstay on some strong Montreal Canadiens teams, like a fresh start somewhere else? He paused a few seconds before answering.

“It’s a difficult question, there’s a few other things that play into that that I don’t want to get into,” he said.

Gorges said he simply wants to “get back to enjoying hockey.”

“We all played this game as kids growing up because we love the game, you love the game and you play to win the Cup,” he said. “Then after while, not that you still don’t have those same feelings, but you realize and understand the business of hockey and the NHL. …

“So you try not to think about those types of things as best you can. … You try to just enjoy every day you can. I told some of the young guys it goes quick, you don’t even really think about it, next thing you know it’s where did it all go, so enjoy it while you got it.”

Gorges said he wants to play as long as everything is still enjoyable. When it starts to “really become a job,” he said, then it’s time to start thinking if he should continue.

“Players always talk about being able to leave and exit the game on their own terms,” he said. “Not too many guys get that luxury.”

When the Sabres started building up the team following the first tank season, Gorges was one of the first significant pieces they added. Whether or not Gorges stays past the deadline, he will complete his Sabres career without a playoff appearance.

Gorges said having not accomplished his goal is “very difficult.” He sorely wanted to be part of the solution in Buffalo.

“You want to be part of the group that turns things around and figures it out and takes that next step, and so it’s felt like a bit of a failure, to be honest with you, because we haven’t achieved what I hoped we would by this point,” he said. “And so as a guy like myself, that eats you up.”