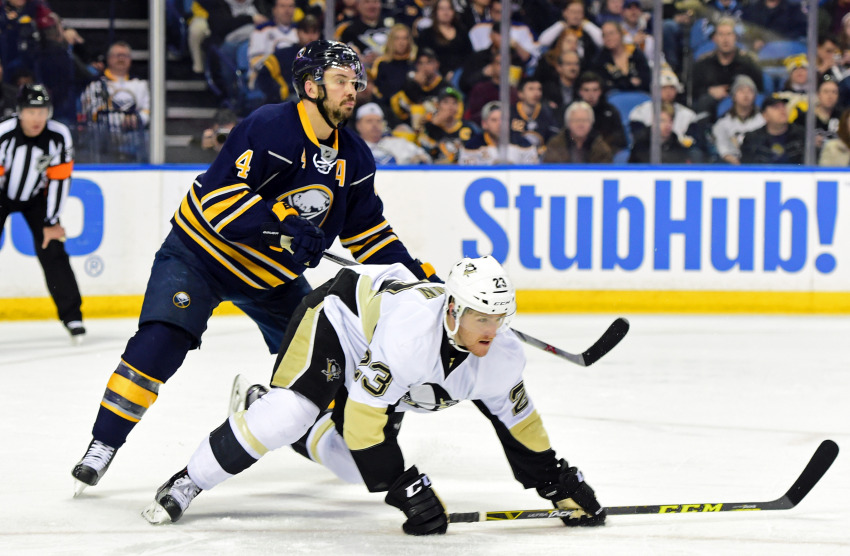 BUFFALO – About 20 times tonight, Sabres defenseman Josh Gorges will jump over the boards to take on arguably the toughest task in hockey, trying to stop Pittsburgh Penguins superstar Sidney Crosby.

Gorges will probably spend around 20 minutes defending Crosby and his linemates, a stiff challenge the 12-year veteran embraces.

To Gorges, the dynamic Crosby is the NHL’s best player, someone to measure yourself against.

“He just does things no one else can do,” Gorges said Friday after the Sabres prepared for the Stanley Cup champions. “You know you’re in for a long night. There’s just no easy shift. There’s no time to relax or even take a breath. He’s going to push your best.”

At his best, Gorges, 32, is a first-pair defenseman capable of shutting down the opposition’s top talent with Rasmus Ristolainen, his partner the last two years.

Gorges and Ristolainen quietly put together perhaps the Sabres’ best performance this season Oct. 16, helping stifle the ultra-talented Connor McDavid throughout a convincing 6-2 win. No other opponent has held the Edmonton Oilers star to zero points and just a single shot on goal this season.

“I take a lot of pride in going out there every night and trying to shut down the best players in the game,” Gorges said inside KeyBank Center. “It doesn’t happen every night, and good players make good plays. But you get those games when things are going the right way. It feels good afterwards, but you also know that a lot of that was based on how forwards were playing.”

Like the rest of his teammates, Gorges has also struggled at times. The entire defense has endured some rough nights. When you’ve lost six straight games (0-4-2) like the Sabres, usually little is working right.

The undrafted Gorges has played 700 NHL games because he showcases a passion and tenacity like few others. In the recent past – think the disastrous 2014-15 campaign, his first in Buffalo – Gorges often became too wrapped up in his responsibilities as one of the team’s leaders.

Over time, however, Gorges, who Sabres coach Dan Bylsma has called “crusty,” has learned to handle tough situations differently.

“There are times when you need to blow a gasket and let people know where you’re at is not OK,” Gorges said. “There’s also times – and that’s where I feel like I’ve gotten better, I’m still learning on that – yeah, keep things a little bit more in control and a little bit more subtlety and subdued to get your message across.”

Toward the end of Friday’s practice, Bylsma and Gorges had a long on-ice chat.

“Josh is going to lay it on the line every night with what he’s got,” Bylsma said. “He’s going to compete and battle. He’s a guy you want to be in a foxhole with, with the way he competes and desperately, desperately wants to win hockey games.

Gorges is clearly at home beside Ristolainen, 22, an emerging star he has skated beside almost every minute since the start of last season.

It was believed Bylsma might switch up his top pair this season, using newcomer Dmitry Kulikov with Ristolainen. But Kulikov was injured after joining training camp late following the World Cup of Hockey.

Meanwhile, Ristolainen, another World Cup participant, only practiced late in camp because he hadn’t signed a contract yet.

“Separated them for, I don’t know, 35 seconds or so,” Bylsma said about Gorges and Ristolainen. “I did it for part of one game and then started the next game with it. Injuries forced that to change. …

“It hasn’t necessarily been my intent the whole time (to keep them together). When Risto started the season with us, he had not had training camp with our team, hadn’t really practiced with another guy and (I) felt like it was best to have those two together.”

Ristolainen has said playing beside the gritty Gorges feels like “home,” a feeling his friend shares.

“You know where the guy is going to be, even if it’s as simple as a five-foot difference compared to somebody else,” Gorges said. “You know his tendencies and it makes making that play a little easier.”

Having a partner 10 years younger also makes everything a little easier.

“He’s got this joy, this excitement about coming to the rink and playing hockey and doing what he does,” Gorges said. “It helps not a real old guy, but an old guy remember the joys of the game and why we play this game and how much fun it is. We’ve gotten to be pretty close friends.”

Sabres center Ryan O’Reilly, out of the last three games with a mid-body injury, didn’t practice Friday or even skate on his own, Bylsma said. O’Reilly is day-to-day but is doubtful for tonight’s tilt.

Meanwhile, Bylsma said the lower-back injury Kulikov suffered late in the preseason has flared up. Kulikov, out the last four games, has been getting treatment. Bylsma said the Russian is “in a day-to-day, two days timeframe.”

The Sabres sent rookie forwards Nick Baptiste and Evan Rodrigues back to the Rochester Americans on Friday afternoon. Both played for the AHL club hours later.

Crosby has nine goals and 27 points in 16 career games at KeyBank Center.