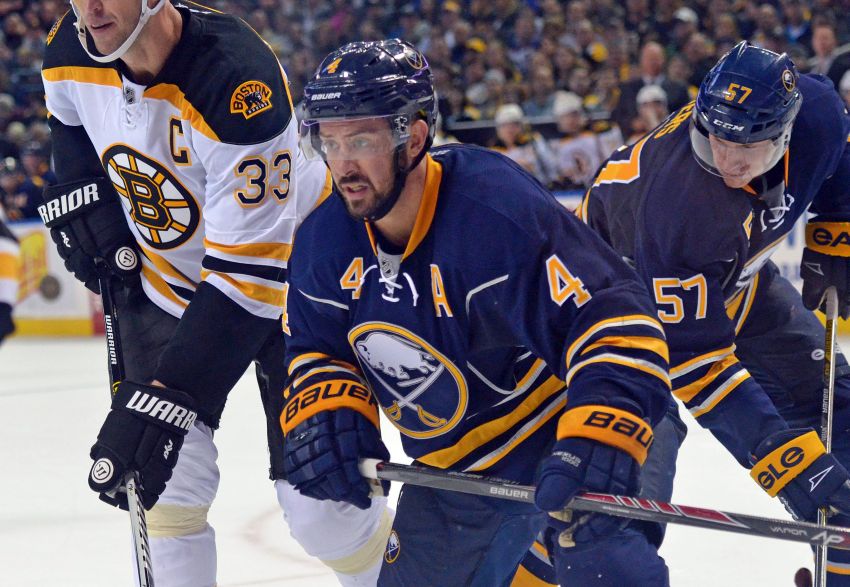 TORONTO – Take away the character, take away the tenacity, and Buffalo Sabres veteran Josh Gorges becomes a run-of-the-mill defenseman.

The undrafted Gorges has built an unlikely 10-year NHL career by showcasing passion – on and off the ice.

The 30-year-old believes he couldn’t do either of those wearing the blue-and-white of the hated Toronto Maple Leafs.

The Canadiens had a deal ready. But having experienced hockey’s biggest grudge match up close for seven years, Gorges knew he wouldn’t be the same player with the Leafs.

So Gorges, who was devastated to be leaving Montreal for any team, nixed the trade, refusing to remove Toronto from his 15-team no-trade list.

“Playing seven and a half, eight years in Montreal, playing against Toronto all those Saturday nights, talking about the history, talking about the rivalry, being a part of it for so long, I didn’t feel like it would’ve been fair to Toronto,” Gorges said inside the First Niagara Center. “Could I have been that same player? Would I have been that same player for them that I was for Montreal?

“I didn’t think I could give … them what I could.”

Does Gorges expect the fans inside the Air Canada Centre will boo him tonight, his first visit this season?

“Yup,” he replied before a reporter could finish the question.

Gorges can also expect a throng of cameras following the skate this morning.

“I’m sure they’ll be a few people wanting to know a few questions,” he said.

Gorges maintains shunning the Leafs was nothing personal against the team, city or fans.

Gorges eventually accepted a trade to the Sabres on July 1, becoming the first of five veterans the rebuilding club added that day.

But for three days, Gorges endured “a lot of unknown.”

“A lot of sticking in limbo would be the best way to explain it,” he said. “You get told they want to trade you, first of all to Toronto. Then I was told from my agent (to) take some time to think about it. …

Gorges has fit in well with the Sabres, a team that sorely needed a steady veteran to stabilize the defense.

“Josh’s impact has been exactly what we expected,” Nolan said. “He certainly adds a competitive element to us. You hear him in practice yelling all the time, you hear him during games, and he doesn’t like to lose. Sooner or later, that attitude rubs off on everyone else. He’s been great for us.”

Did Gorges envision this role when he agreed to join a team coming off a 30th-place finish?

“I don’t think you ever really know what you’re getting into until you get there and get a feel for how things actually are,” he said. “I knew coming in that I’d be counted on to be a leader, especially with the young defensemen, and (to) be a role model. That’s been what I thought it would be, and now it’s just a matter of that I take care of my job on the ice as well. I can’t just focus on trying to teach. I have a job to do as well.”