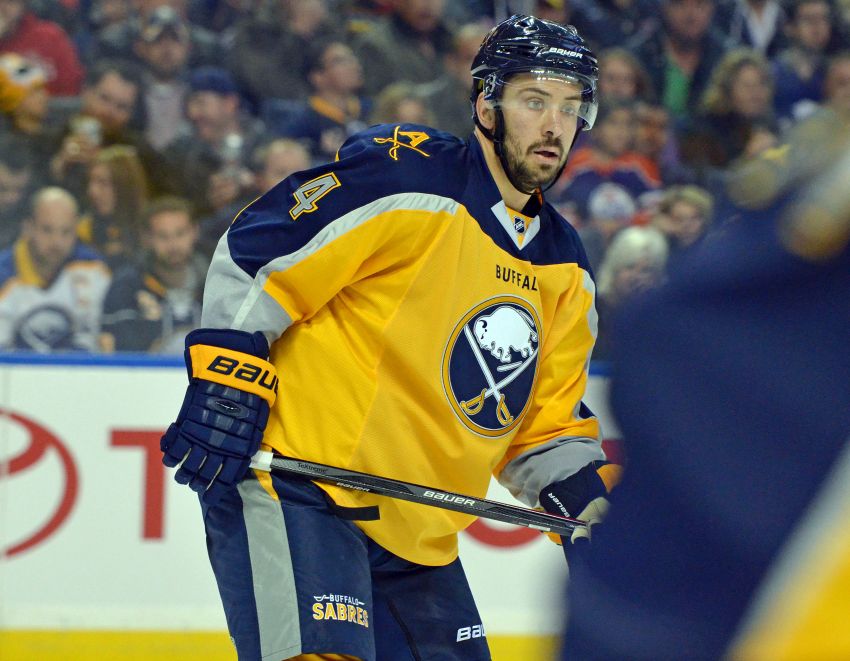 BUFFALO – Almost five years ago, Sabres defenseman Josh Gorges sold out while killing a penalty with Montreal. Against better judgment, Gorges dropped down to the ice and laid flat in front of a lethal one-timer from Washington’s Mike Green.

The puck hit Gorges in the back of the head, knocking him out cold.

“Scared the hell out of me,” Gorges recalled Saturday prior to the Sabres’ 4-3 overtime win against the Florida Panthers inside the First Niagara Center.

Gorges said he was out three seconds, which “felt like an eternity.”

“I couldn’t move, and I thought I was paralyzed, and I was looking at Carey (Price), and he’s flagging for the trainers, and I kept yelling to him, ‘I can’t move, I can’t move!’” Gorges said.

Luckily, Gorges – “I blew the back of my head open,” he said – was fine. He practiced the next day and played two days later.

But the incident taught Gorges a valuable lesson.

“That changed the way I blocked shots the rest of my life,” he said.

Fast forward to today, and Gorges is one of the NHL’s best shot blockers. He entered Saturday fourth in the league with 144 blocks in 22 games before leaving after blocking a shot. The Sabres as a team ranked third with 533.

Gorges, who will miss Monday’s game against Ottawa, now tries to go down to one knee to block a shot.

“When I do that, I feel like I still have the ability to use my stick,” he said. “I can guide him to put the puck in a position that is better for me. If he decides to not shoot it, make a move, (I’ve got) half a second to get up and still adjust to the play.

“So you cover a little bit more width, area, but you’re still in a position to maneuver if something does happen.”

Of course, to block shots, a player must possess a certain fearlessness to stand in front of a puck traveling close to 100 mph.

“You have to have a willingness,” Gorges said. “I’ve learned over time you’ve got to have some timing and positional awareness and things like that. But at the end of the day, do you want to stand in front of it, or do you not? You can fool people and be in the lane but not really be in the lane.”

Gorges believes the blocks are often “a product of smart play” by his teammates.

“As a D-man, when you get the puck at the blue line and you have a forward that pressures them hard, it’s easy for him to get that shot past the forward,” he said. “He’s just got to shoot it past the shin pads. But as a D in front of the net, I know that if my forward does his job, he’s only got one place to put it if he wants to get it anywhere near the net.

“So you go stand there. And if he shoots it at the other side, he’s going to miss the net. So that’s a thing where if our team’s doing the right thing and they’re getting good pressure and forcing the opposition to make those shots, it’s easy for us as D-men to get in the way of those shots.”

Weber underwent minor surgery on his left knee Friday and will be sidelined until just after Christmas, Nolan said.

“It’s nothing major, but it’s kind of like a maintenance cleanup for an area he was battling for about three weeks or so,” Nolan said. “He could probably go the rest of the year with it, but we thought it was best to do it now.”

With Weber out, defenseman Andrej Meszaros returned from a six-game absence (possible concussion).