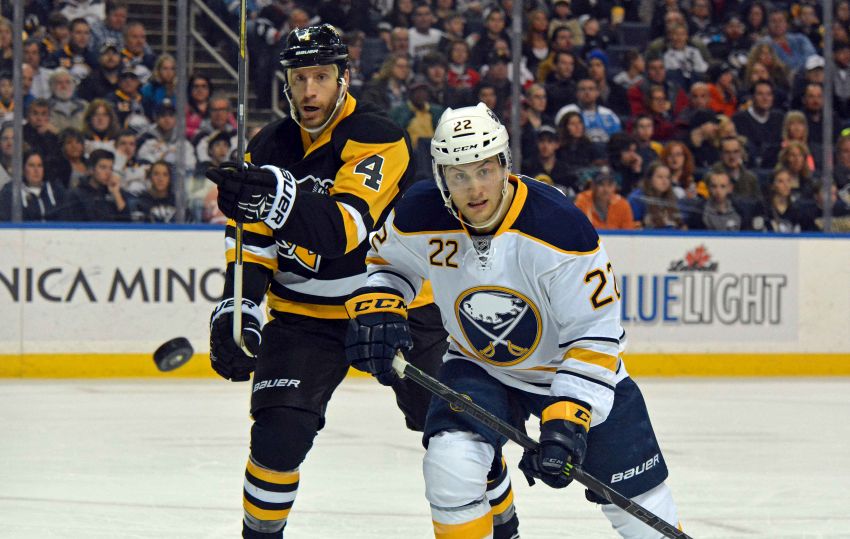 BUFFALO – Three months ago, when the Sabres seemingly banished Johan Larsson to the minors, the 22-year-old’s future here seemed iffy.

Upon arriving in Rochester, Larsson complained about playing on the fourth line with the Sabres, something that angered coach Ted Nolan, who basically told Larsson to shut his mouth.

At that point, Larsson had one goal and six points in 41 NHL games.

Larsson entered Saturday’s season finale against the Pittsburgh Penguins, a 2-0 loss inside the First Niagara Center, as the Sabres’ No. 1 center. A promotion shortly after his Feb. 15 recall ignited him, and he began Saturday with five goals and 14 points in his last 19 games.

The Swede, a restricted free agent this summer, could be one of the Sabres’ top centers again next season.

How did Larsson transform his game?

“I think he’s just really playing the way he’s capable of playing,” Nolan said before the game. “Some of the times when you’re young and a little bit immature, you kind of worry about who you’re playing with and how much ice time you’re getting. And sometimes you’re so caught up on that versus what’s most important is your play, and this time around I think he’s really concentrated on playing.”

Clearly, Larsson seized the opportunity Nolan awarded him. He mostly centered leading scoring Tyler Ennis and Matt Moulson for the final month or so.

“It’s hard to say, but playing with good players always helps, more minutes, a little power-play time, it helps,” Larsson said about what changed his game. “It makes you feel confident out there.”

“You want to keep playing when you’re playing good,” he said.

Facing the opposition’s best was a special experience for Larsson. Early on, when he went against Washington star Nicklas Backstrom, a fellow Swede, the role he was playing really hit home.

“You see all those top players and then you go against them,” he said. “It’s truly a motivator to see how good they are and how good you can be.”

Larsson watched how good Chicago center Jonathan Toews can be late in the Blackhawks’ 4-3 win here April 3. Toews scored twice in the waning minutes, including a goal in which he won a faceoff against Larsson and then beat him in front.

“You look at Larsson going against Toews in the last minute of the game, I think right there he learned a valuable lesson that should help him the rest of his career,” Nolan said.

Larsson added: “The last two shifts he shipped it in, so it’s kind of tough.”

Nolan on the development of the Sabres’ youngsters, all of whom he believes made strides in 2014-15:

“Sometimes when you’re so focused on the future, you forget about the present once in a while. You look at the way (Rasmus) Ristolainen’s really developed, the way (Zemgus) Girgensons was playing, the way Tyler Ennis played this year, the trying times of (Nikita) Zadorov, Marcus Foligno’s development.

“You look at all those young guys, I think they’ve made some spirited steps in the right direction, getting better.”

Prior to the game, the Sabres named Ennis team MVP (20 goals, 46 points), winger Nick Deslauriers rookie of the year (only Sabre to play all 82 games, ninth in NHL in hits) and defenseman Mike Weber unsung hero (team’s Masterton Trophy nominee for dedication to hockey).