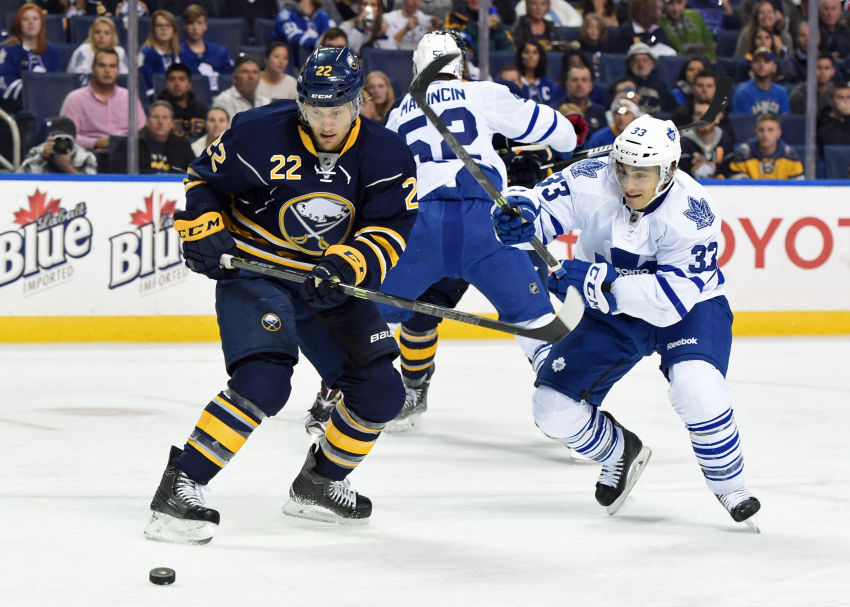 BUFFALO – When Johan Larsson scored his first goal this season Monday, the winner with 3:13 left in the Sabres’ 2-1 comeback win in Detroit, coach Dan Bylsma couldn’t quite read the center’s body language.

“Whether he was happy, relieved, matter of fact,” Bylsma said this morning after the Sabres prepared for tonight’s game against the New Jersey Devils. “I know he’s been pressing for a while now not having scored. To get that one and to get it at that point in time, it was probably a big sigh of relief is what we saw from him.”

Naturally, Larsson’s first score in 28 games this season and 30 overall dating back to April 6 was a big relief. He finished 2014-15 as the Sabres’ top center, scoring five goals and 14 points in the last 20 contests.

But he struggled from the get-go this season, switching back to wing briefly and becoming a healthy scratch.

In other news, goalie Linus Ullmark, who won for the first time in seven games Saturday, will start against the Devils, one of the NHL’s biggest surprises at 15-11-4.

The rest of the lineup will be decided at game time, Bylsma said. Forward Cal O’Reilly, a healthy scratch all five games since getting recalled Dec. 5, will skate in the pregame warm-up, he said.

Update: Winger Marcus Foligno is out tonight, meaning O’Reilly will make his Sabres debut and play his first NHL game since Feb. 15, 2o12. Foligno has an upper-body injury.

In injury news, Sabres goalie Robin Lehner hasn’t experienced a setback in his recovery from the high ankle sprain he suffered Oct. 8, opening night, Bylsma said. The Sabres said Lehner would miss six to 10 weeks then. A “Hockey Night in Canada” report on Saturday said Lehner recently had a setback and would miss another three to four weeks.

Some other notes for tonight’s game:

– The Sabres are gunning for their fourth straight home win.