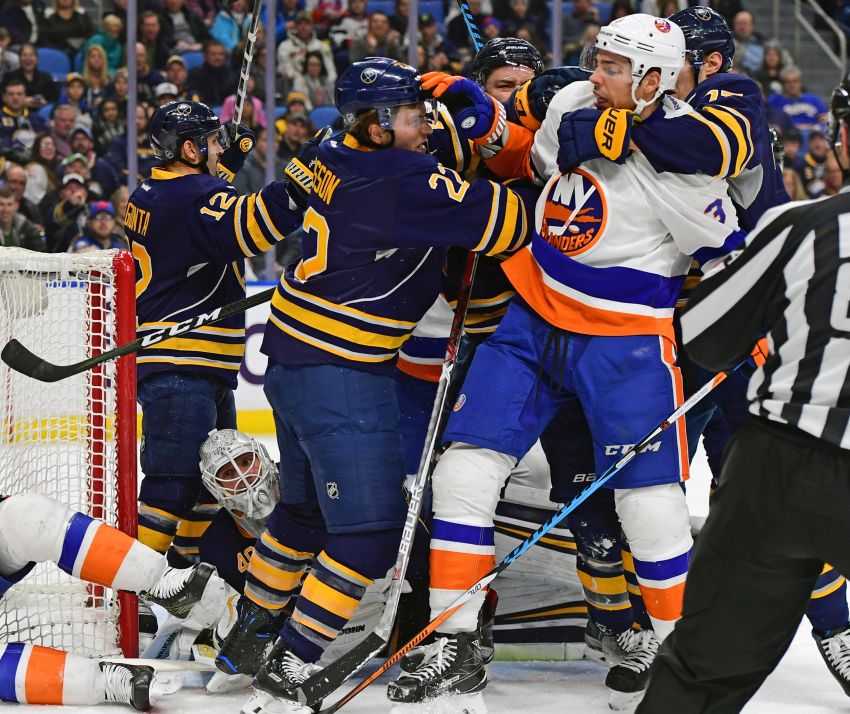 Larsson, who was injured when Adam McQuaid hit him early in Saturday afternoon’s 3-1 loss to the Bruins, flew back from Boston today.

Update: According to The Buffalo News, Larsson told Gotland Newspapers in his homeland of Sweden through a text message his season is over.

The Swede’s absence leaves the Sabres woefully thin down the middle. With Ryan O’Reilly out after having an appendectomy last week, the Sabres are down two of their top three centers. Larsson, a tenacious and versatile presence, usually centers the third line, a strong checking trio.

“Zemgus will kind of assume the position Lars was in, a little bit of the defensive situations he’ll be favored in,” Bylsma said today following practice inside KeyBank Center.

That means Girgensons will face some prime talent during the Sabres’ two-game road trip against the Rangers and Chicago Blackhawks, which starts Tuesday in New York.

The reeling Sabres, losers of six of the last seven contests, roared back to beat the potent Rangers here Dec. 1, arguably their best victory this season.

“When we look back at that game and think about it, we didn’t do anything fancy,” Sabres defenseman Josh Gorges said. “We came to work. We knew what we were up against. We knew we were playing a team that you got to have one of your best game, and tomorrow’s going to be no different. We got to be at our best.”

In other news, Gorges, who left Saturday’s game with a hip pointer, practiced today and could return Tuesday.

“It was to a point where I didn’t have strength,” Gorges said about Saturday. “To go out there, you’re really putting yourself in jeopardy but you’re also putting your teammates in jeopardy. If I don’t have the ability to skate and turn and make a proper play, I’m putting myself and my team in a bad position.”

“Hopefully, that means he’s progressing to a higher workload and back to the ice,” he said.

The Sabres could make a recall for the trip, Bylsma said.