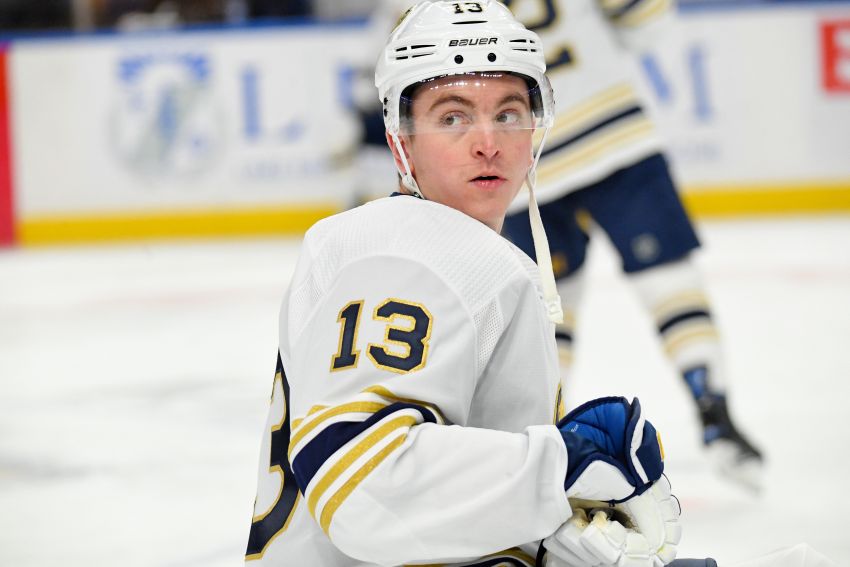 BUFFALO – After enduring a 20-game goal drought to start his Sabres career, winger Jimmy Vesey has scored five times in his last 21 outings.

“Which is about where I want to be,” Vesey said Friday after practicing on the top line beside center Jack Eichel and Sam Reinhart.

Having averaged 17 goals over his first three NHL seasons with the New York Rangers, Vesey’s recent numbers are in line with his normal production.

“The first 20 games wasn’t what I wanted,” Vesey said. “I think since then I’ve actually been on a pretty good pace.”

Their secondary scoring has often been nonexistent this season. Skinner, Eichel and Reinhart have scored a whopping 53% of the Sabres’ goals.

Vesey’s first score with the Sabres on Nov. 25 ignited him a bit, kicking off a three-game goal streak. He has scored twice in the last 18 contests.

But the injuries have created opportunities for players like the 6-foot-3, 202-pound Vesey.

Krueger said “there’s a good chance” Vesey will play there again this afternoon against the Vancouver Canucks at KeyBank Center.

“An opportunity to step up,” Vesey said of his new assignment. “We’ve been looking for scoring and it can’t keep coming from the same guys. I think as a group collectively we’ve got to start pitching in up and down. I think when we do get secondary scoring, I think it just makes us that much more difficult to play against, because we know Jack and Sam and our power play are going to get looks.

“If they can cash in and we get secondary scoring, we’re a tough team to play against.”

Vesey, who has occasionally skated with Eichel and Reinhart, knows he must shoot more to score. He has registered zero shots on goal in the last two games and pumped just four on net in the last six contests.

“I’ve passed up a couple (shots) in the last two games,” he said. “It feels good to make a pretty pass sometimes, but I think shooting the puck. … I got to get back to the shoot-first mentality.

“I’d like to score more goals in front of the net. I think I’ve done that in my career. I don’t think I’ve had as many opportunities right on top of the crease.”

The Sabres as a whole must shoot more often – they mustered only 19 shots Thursday – and create traffic at the net.

“More than anything, as a group we’re striving for a strong net presence,” Krueger said. “Jimmy is the kind of guy that’ll profit from second opportunities. Being around the net is somewhere you need to be to get those.”

He added: “He’s got some speed and body size. Getting him more into the slot area, getting him into those spaces in front of the net, we think he can get some opportunity off of Jack and Sam.”

Despite his scoring struggles, Vesey evolved with the Sabres, establishing himself as one of Krueger’s trusted checking forwards and penalty killers.

“I’ve been really consistent in that aspect,” Vesey said of his checking abilities. “My plus-minus is way up this year, I’ve played on the penalty kill for pretty much the first 35, 40 games. It’s kind of a new role for me, but I think I’ve done a good job and been responsible.

“It’s my fourth year now, so I know the game is at both ends of the ice. Yeah, I’ve been happy with that aspect. I think I still have more to give offensively.”