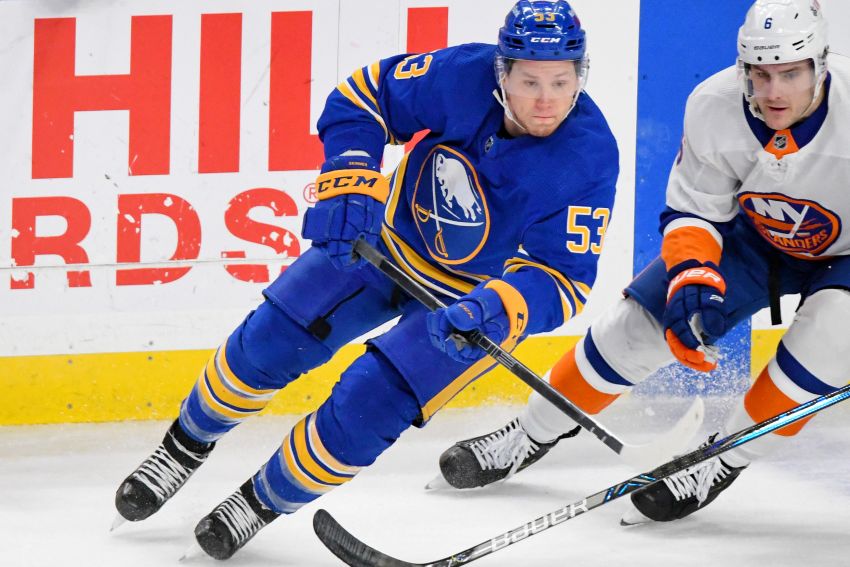 Over his first nine NHL seasons, Buffalo Sabres winger Jeff Skinner produced one season of at least 31 goals for each of the four head coaches he played under.

Following his arrival from the Carolina Hurricanes in 2018, Skinner scored a career-high 40 goals for Phil Housley.

But Skinner, 28, has struggled so badly under Ralph Krueger, Housley’s replacement, he could be a healthy scratch for the first time ever in tonight’s road game against the New York Islanders.

Skinner, who has scored zero goals in 14 games this season, skated as an extra forward during Sunday’s practice beside Rasmus Asplund and Tage Thompson, according to The Buffalo News.

Krueger acknowledged Skinner, who’s in the second season of an eight-year, $72 million contract, might be a spectator for tonight’s contest at Nassau Coliseum.

“You saw a potential change in the mix today,” Krueger said on a Zoom call Sunday. “We won’t confirm it until tomorrow. But it’s how we function here, we look honestly at production, we look honestly at the inputs in and around the team game that we need and try to put that mix into place that gives us a chance.”

Skinner doesn’t think a night off to reset and watch a game would help him.

“This is my 11th year,” said Skinner, who has recorded just one assist this season. “I don’t … think I’ve ever really felt I need a day off to relook at things. I think I’ve seen a lot in this league, run through adversity before in my career. You just work, keep working and put you’re head down. That’s what I’ll do.”

Other than a productive two-month stretch at the beginning of last season, Skinner has produced little offense under Krueger, registering only 14 goals in 73 games.

But Skinner scored 11 times in the first 28 contests a year ago, meaning he has mustered just three goals in his last 45 outings.

When asked if if it has been hard to get on the same page as Krueger and play the style he expects, Skinner struggled to find the right words.

“I don’t know,” he said before pausing. “I’ve played for a lot of coaches. I don’t know if it’s that simple. Obviously, I’m going through a little bit of a slump and it’s not something I’m used to, especially five-on-five. Since I’ve come in the league, I’ve shown to have some pretty good success five-on-five. It’s just something that’s not working or not going well right now and I’ve just got to work my way out of it.”

Skinner has scored 205 even-strength goals since 2010-11, the NHL’s seventh-highest total. He recorded 32 of them two years ago, a season in which he spent nearly every game playing with top center Jack Eichel.

Krueger recently promoted Skinner to the top line beside Eichel before moving him back to the fourth trio, a spot where he has spent most of the season.

“He has been misplaced in the lineup again this year and he, I am sure, is wondering why,” said one scout who has watched Skinner throughout his career. “Jeff Skinner is an offensive player. He will never be a complete player, but that’s not what he’s paid for.

“He is never going to be a defensive-minded player. Sometimes coaches just need to understand that and turn a blind eye to his deficiencies to get the positives. There are very few perfect players in the NHL. … Skinner needs to play with somebody who can get him the puck.”

Krueger understands scratching Skinner would be a big deal. Still, he has shown over his tenure that he’s unafraid to bench established talent. He sat out defenseman Henri Jokiharju for Saturday afternoon’s 3-2 road win over the New Jersey Devils.

Last season, he scratched defenseman Zach Bogosian, who was so infuriated he requested a trade hours later.

“My role’s not to be popular here but to be respected at the end of the day, whatever reckoning is on the table,” Krueger said. “It’s the way we like to lead out of the coaching room here striving for honesty within accountability and also hopefully getting players to their potential, in the end is my job, is our job. …

“When we make hard decisions, they’re not necessarily short-term, ‘Will they make everybody happy?’ But hopefully it pushes the right buttons in the individuals to have them fulfill the roles that we expect.”