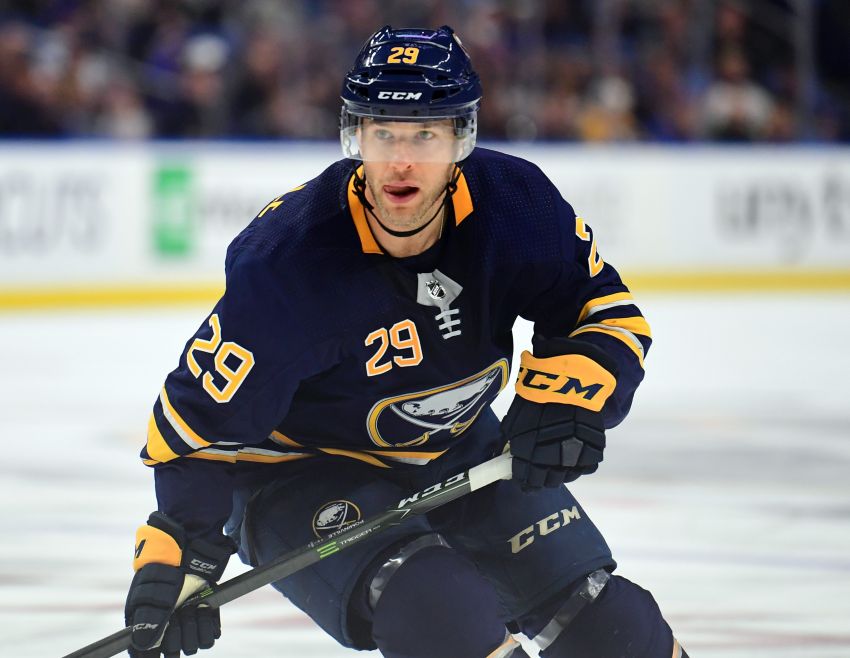 Jason Pominville has been skating on the first line. ©2018, Hickling Images

“Phil did his pregame speech and he’s like, ‘Wait, I forgot something,’” Pominville said Friday inside KeyBank Center.

When Housley returned, he brought Pominville’s wife, Kim, and two children, Jayden and Kaylee Rose, with him.

“When I saw them in the room, I almost had tears in my eyes,” said Pominville, who scored his 283rd NHL goal in the Sabres’ 4-2 road loss to the Ottawa Senators.

“It was really important that his family was there,” said Housley, whose Sabres host the Senators this afternoon. “Our team rallied around it before the game.”

Everyone involved kept the pregame surprise a secret. Pominville, however, found out about some other special plans his wife had for the night.

Pominville, who’s from Montreal, said his friends told him they planned to attend the game, yet no one asked him for tickets.

“I talked to my wife, I’m like, ‘What’s going on? No one’s asked for tickets,’” a laughing Pominville said. “So she starts laughing and I just kept asking more and more questions. She had to give in.”

In all, Kim gathered 20 or so family members and friends, including Pominville’s parents.

Others, including former teammates, reached out with text messages.

“That was very, very touching,” said Pominville, who will be honored by the Sabres before this afternoon’s game.

To Sabres captain Jack Eichel, Pominville “deserves every bit” of the congratulations he has received.

“He’s so just so well-respected around the league, around the community,” Eichel said.

These days, four weeks before he turns 36, an age when most NHL players are retired, Pominville is a first-liner and one of the Sabres’ top offensive threats.

Incredibly, Pominville hit the prestigious mark enjoying one of his hottest runs ever. His third-period goal Thursday extended his point streak to six games, giving him five goals and 10 points during the stretch.

Right now, Pominville looks like someone enjoying his prime. The former NHL All-Star has six goals and 11 points through 13 games, a 38-goal, 69-point pace over a full season.

Of course, Pominville has lasted 14 seasons because very few NHL players are like him.

“One thousand games is a hell of an accomplishment,” Sabres winger Kyle Okposo said. “He takes care of himself in a way not many guys do. I’ve only seen a couple guys in my career take care of themselves like he does. So it’s just a testament to him. One thousand games is just a definite pause-and-reflect time in your career.”

“Whether we’re losing, we’re winning, whether last year was tough, game 54, he’s still in there in the gym doing his routine,” Okposo said.

Taking care of himself and his body has always been a point of pride for Pominville.

“I think what you do away from the rink goes a long way and reflects on what you do,” Pominville said. “As you get older, you probably have to pay more attention to what you do off the ice. I used to do it when I was younger and now it’s kind of still in me.”

So is Pominville’s scoring prowess. He has been piling up points beside Eichel and Jeff Skinner, a trio that has provided most of the Sabres’ offense over the last week or two.

“The biggest thing is we get in there and we forecheck and we work and we battle,” Pominville said. I think the league is so tight … you have to compete, you have to battle, and I think our line has been able to do that on a pretty consistent basis and we’ve defended well. If you defend well, you’ll have the puck more.”

Pominville has been terrific around the net, getting rewarded with goals. He scored there again Thursday.

“We’ve found a bit of chemistry here,” Eichel said. “I know when he gets it, he’s looking to move it to me and get to the net. I know if I get him the puck around the net, he’s pretty automatic.”