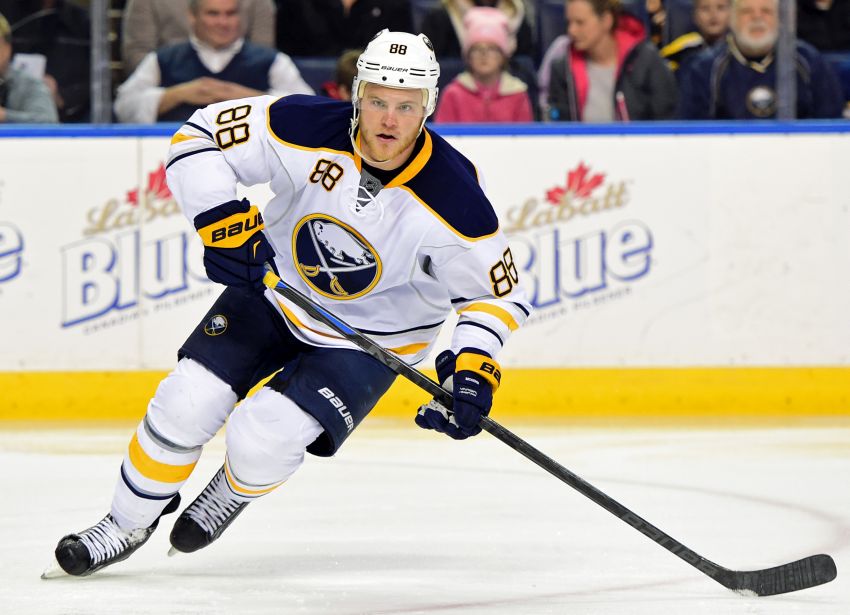 BUFFALO – After 12 seasons as the face of the Carolina Hurricanes, Eric Staal waived his no-trade clause to join his brother, Marc, in New York for the Rangers’ Stanley Cup-or-bust run. Former Winnipeg Jets captain Andrew Ladd is back in Chicago, where he won a championship with the Blackhawks in 2010.

Thanks to a few days of heavy action, the crop of notable rental forwards available before the 3 p.m. trade deadline – the ones set to become free agents – has already dwindled significantly.

Luckily for the Sabres, they have winger Jamie McGinn, one of the best left on the market.

In his first season here, the versatile McGinn, 27, has morphed into one of the Sabres’ top assets, compiling 14 goals and 27 points in 63 games. The afterthought in the blockbuster Ryan O’Reilly trade with the Colorado Avalanche has consistently showcased a nose for the net and an ability to play on any line on either side.

Sabres general manager Tim Murray said earlier this month he had talked about a contract extension with McGinn’s agent. Last week, however, McGinn told The Buffalo News and WGR there was “no news” to report.

McGinn recently told The Times Herald a new contract would have “to work for both sides.”

But is leaving a great fit – spending the final years of your prime beside Eichel would be special – worth a little more money? The grass isn’t always greener elsewhere.

Based on recent trades, McGinn could fetch a second-round pick or a prospect or perhaps both. On the open market in July, he could command a three- or four-year deal with much more than the $3 million he’s earning this season.

Clearly, the Sabres will dish McGinn if they can’t sign him.

While McGinn is the Sabres’ most notable piece, they have three other players set to become unrestricted: goalie Chad Johnson, defenseman Carlo Colaiacovo and center David Legwand.

Johnson, 29, will likely be traded. The backup has enjoyed a strong season, going 14-14-3 with a 2.45 goals-against average, a .917 save percentage and one shutout in 33 games (29 starts). He subbed admirably for Robin Lehner during the starter’s three-month absence.

Like many other players, Johnson has fallen in love with Buffalo and spoken about his desire to stay. Still, given he’s played well enough to earn a two-year deal and the Sabres likely wouldn’t want to give more than a year with Linus Ullmark in the pipeline, he probably has to leave.

Colaiacovo, meanwhile, never lost his smile during a rough 10-week stretch in which the affable veteran was scratched 15 straight games and a whopping 30 out of 32.

Following practices, long after many of his teammates had left the dressing room and showered, Colaiacovo, 33, would often leave the ice grinning and ready to chat up anyone within earshot.

Some players possess the right mentality to conquer adversity, and Colaiacovo, having overcome a string of injuries that nearly derailed his career, is grateful he owns a coveted NHL roster spot.

“I consider myself very lucky, fortunate, and I never want to take that for granted,” Colaiacovo said last week. “Am I (not) happy about not playing? Of course. But I’m also very happy that I’m still here.

“Obviously, patience is a big component to being in this league, and the older I get, the more patient I’ve had to be.”

Colaiacovo’s patience paid off Tuesday, when the Sabres traded defenseman Mike Weber, opening up a spot for the former first-round pick. After playing twice in a 75-day stretch, Colaiacovo dressed for three games in four days last week.

Depending on the Sabres’ actions today, Colaiacovo could see regular duty for the final six weeks or be on the move to his sixth team. Established defensemen are always in demand at this time of year.

“I’ve never felt this good in my life,” said Colaiacovo, who signed a one-year deal in July. “I’ve always looked at age as just a number. I work extremely hard both on and off the ice to keep myself ready, so when my time comes I am ready. It’s been difficult (sitting out). I’m not going to lie. It’s been stressful on me and stressful on my family. But it’s the nature of the business.”

The Sabres will likely need a depth defender again following the season, so Colaiacovo, despite sitting for so long, could still have a future here.

“I truly, truly love being a Buffalo Sabre,” Colaiacovo said. “I love being part of this organization. I would really appreciate the opportunity to stay here this year and beyond this year. Wherever that takes me, it’s up to management and coaches to decide.”

Legwand, 35, could draw interest from a team looking to add a fourth-liner popular with his teammates.

Could someone else be on the move? Might, say, defenseman Cody Franson, who has a year left on his two-year contract, draw interest? Injured winger Tyler Ennis’ name has also popped up in rumors.

Murray loves to make huge trades. Anyone, other than perhaps Eichel and a few others, might be on the table for the right price.