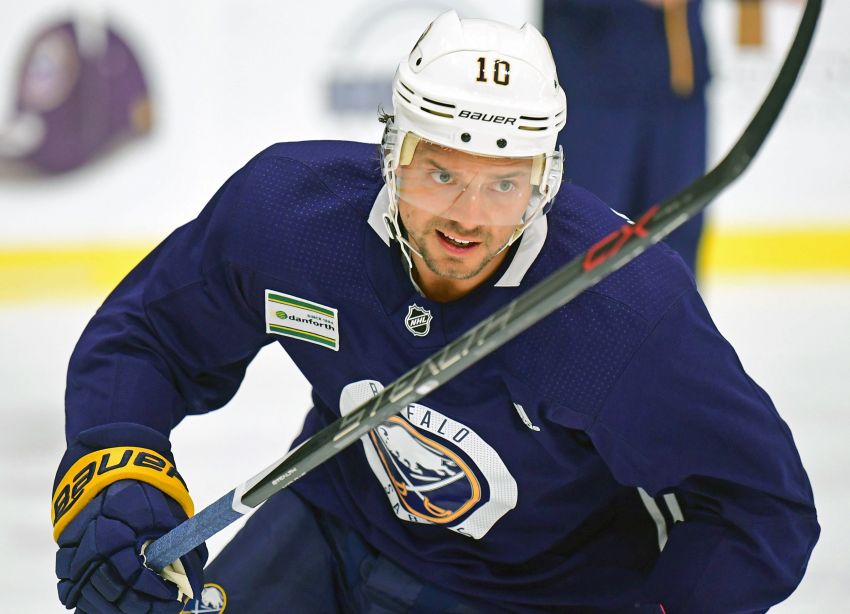 Jacob Josefson has scored on more than half of his shootout attempts. ©2017, Hickling Images, Olean Times Herald

TORONTO – Try figuring this out. In 276 NHL games, Buffalo Sabres center Jacob Josefson has scored only 18 goals. In three of his seven seasons, the Swede has recorded just a single goal.

But Josefson, having scored 11 goals in 21 attempts, is a shootout stud. His 52.4 shooting percentage ranks fourth among active players, according to sportingcharts.com, trailing only Brandon Pirri, T.J. Oshie and Jakob Silfverberg.

“I have no idea,” he said prior to Friday’s 3-0 preseason loss to the Toronto Maple Leafs inside Ricoh Coliseum. “I guess (I have) good confidence there. The coach has been able to put me out in those situations. Once you score a couple you get confident in that situation. It’s been fun. I like being out there for the shootout.”

Josefson said he simply tries to read the goalie and go the opposite way, nothing too fancy. Still, he possesses slick moves.

Housley will likely make Josefson his third- or fourth-line center, a role similar to the one the 2009 first-round pick had with the New Jersey Devils. On Friday, Josefson pivoted Johan Larsson and Nick Baptiste.

“He’s just a really smart hockey player,” Housley said of Josefson. “He’s always in the right spot, in the right position, either offensively or defensively, and I can see why he’s a high-possession player. Hopefully, we can translate that into more goals and points. But I’m really intrigued what he’s brought in the first game.”

“I’m a good skater with a pretty good passing game,” he said.

Josefson believes focusing on the details elevates his game.

“I kind of got ripped apart by some injuries and stuff like that,” he said. “I felt when I was playing, especially after Christmas, (it was some) of my best hockey. Unfortunately, at the end of February, I had a fracture in my back.”

While Josefson said he liked New Jersey, he knew he needed a fresh start. The Sabres’ new staff intrigued him.

“It felt like a good fit,” he said. “I think they have something interesting going on here, fun to be a part of.”

He added: “There’s so much talent on this team. It’s inspiring to be on.”

Sabres forward Evan Rodrigues left the game after Leafs forward Andreas Borgman crunched him into the boards with around eight minutes left in the second period.

Housley had no update and said the Sabres will know more today.

Despite getting outshot 9-0 in the opening nine minutes and 14-5 in the first period, the Sabres hung around, mostly due to goalie Linus Ullmark, who made 32 saves.

“He was the only reason we were in it,” Sabres center Ryan O’Reilly said.

The Sabres have taken a whopping nine penalties in each of the last two games.

“I don’t think we were ready to play,” Housley said.

How’s this for a scheduling quirk? After this weekend’s home-and-home preseason set with the Leafs – Toronto plays tonight in Buffalo – the fierce rivals don’t meet again until March 5.

“It’s crazy,” Housley said Friday morning inside KeyBank Center in Buffalo. “When I looked at the schedule, here’s one of the rivals in our division, we’re not going to see them until March. Hopefully, they’re going to be real meaningful games at that time and there will be something on the line.”

“One day at a time,” Scandella repeated a few times after skating Friday inside HarborCenter.

Housley said Sabres winger Alexander Nylander, out since suffering a lower-body injury in rookie camp, could skate in the “near future.”

Notes: Sabres forward prospect Cliff Pu, the only junior player left in training camp, played his second exhibition game. Meanwhile, winger Seth Griffith, an AHL star fighting to make the big club, played his third contest. … The game was played at Ricoh because the Air Canada Center is being used for the Invictus Games.