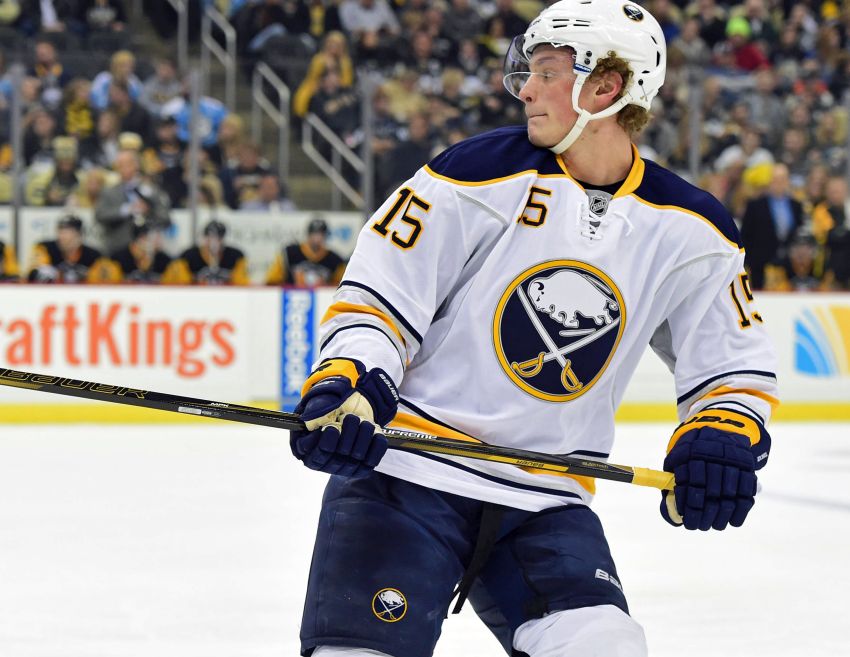 OTTAWA – The Jack Eichel Show started on the slick center’s third shift of the season, just 6:16 into the Buffalo Sabres’ exciting 5-4 win against the Senators.

Stationed above the left circle on the power play, Eichel showcased some supreme vision and adroit passing, finding Kyle Okposo in front for the opening goal Tuesday.

On his next shift, Eichel, 20, unleashed a wicked power-play one-timer from the left circle off Ryan O’Reilly’s feed, beating Senators goalie Craig Anderson at 9:31.

Most observers expected Eichel’s season debut would ignite the reeling Sabres, whose anemic offense ranks last in the NHL.

But two points before the first period was half over? From a guy who just missed 21 games with a high left ankle sprain, a notoriously hard injury to overcome?

“Just a lot of energy today waiting for the game to start,” a smiling Eichel told a crowd of reporters.

Eichel nearly had two more points – his nifty feed sent Sam Reinhart on a breakaway and he almost fed an open teammate in front later – before the first period ended.

“Having Jack back in the lineup, the spark that he brings … as a guy who likes to create, it gives me excitement,” said O’Reilly, who had two goals and three points.

At the end of the first period, thanks to a helmetless O’Reilly’s quick answer to Mike Hoffman’s score, the Sabres led 3-1.

The Sabres had scored three goals in a game only six times this season and just once in the last 13 contests.

But the Senators roared back before the 14,259 fans inside the Canadian Tire Centre.

Mark Stone’s power-play goal made it 3-2 8:20 into the second period. Old Buffalo nemesis Dion Phaneuf then appeared to tie it, but the Sabres challenged, and officials ruled Chris Neil interfered with backup goalie Anders Nilsson, who replaced an injured Robin Lehner.

Lehner is day-to-day with a hip injury, Sabres coach Dan Bylsma said. The Swede played 17:48 because a cramp tightened up when he tried to play the puck. He briefly returned to the bench but later left for the dressing room.

“I don’t want to overreact,” Bylsma said. “He had it for about five minutes in the game.”

The Sabres hit the five-goal mark for only the third time this season with O’Reilly’s power-play score 16:43 into the third period. O’Reilly began the night goalless in his last six games.

“Every one of our goals pretty much was one of those feel-good goals,” Bylsma said.

But O’Reilly’s score couldn’t seal it. Hoffman’s power-play goal at 18:29 completed the hat trick and got the Senators within one.

The Sabres then eked out their third win in five games and their eighth this season.

While one game is a small sample size, Eichel, the face of the franchise, appears poised to enjoy a breakout year following a rookie season in which he recorded 24 goals and 56 points.

“His ability to skate the puck was dynamic for us,” Bylsma said.

So was Eichel’s presence on the power play, where his ability to one-time the puck has been sorely missed.

“I was pretty excited in that first period, then that second period I got a little fatigued because it’s tough to keep in game shape after not playing for a while,” Eichel said.

Eichel nearly stuffed a puck in early in the third period and was later penalized for delay of game.

He said Tuesday afternoon he can still feel the injury he sustained Oct. 12, although it doesn’t hinder him.

Eichel has four goals and seven points in five career games against Ottawa.

One thought on “Sabres’ Jack Eichel wows in season debut”