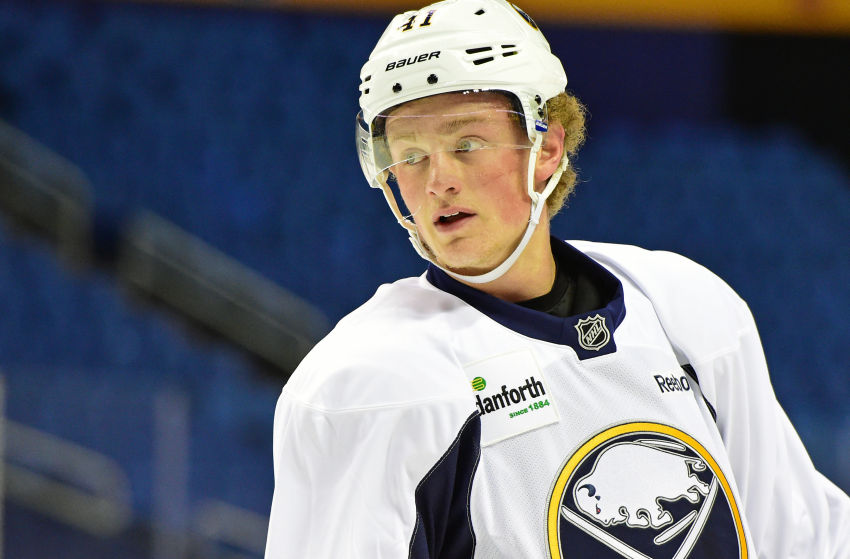 “This is still training camp – I’ve said this all along – I still have to earn a position and earn a role on the Sabres,” Eichel said Friday following the first session of camp inside the First Niagara Center. “That’s what training camp’s for and what I’m trying to do. Until then, I’m No. 41, as I wore at development camp and as I wore at the prospects tournament.

So if Eichel plays Monday in Minnesota, he plans to wear No. 41 for the preseason opener.

“In the National Hockey League, you don’t get a number until you make the team,” he said. “You have to earn it. The number (is) not going to be given just because we drafted him second pick overall.”

Eichel skated Friday between Moulson, his left wing, and Zemgus Girgensons, a center all of last season. Right now, the line might be the Sabres’ second scoring line behind the trio of center Ryan O’Reilly and wingers Evander Kane and Tyler Ennis.

“Every night at dinner that’s what he says,” Eichel said.

Girgensons, who’s fine with the move, offers Eichel some “protection,” Bylsma said. The Latvian can help the youngster if he needs to take a defensive zone faceoff or there’s a tough matchup on the road.

“I think it’s a real solid line,” Bylsma said. “Reino’s going to have to some protection on that line as well from the two veteran players.”

Reinhart could also see some time at the wing and play with Eichel during camp, Bylsma said.

Sabres forward Cody McCormick, who was hospitalized with blood clots in January, failed his camp physical and is out indefinitely, the team announced Friday.

Bylsma said McCormick’s condition is related to the clots. He had no further update.

McCormick, 32, blocked a shot Jan. 3 and played three more games before doctors found the clots had spread to his lungs. He couldn’t skate the final months of last season because he was taking medication.

In other news, the Sabres also announced an upper-body injury will sideline defenseman Rasmus Ristolainen the first seven to 10 days of camp. Bylsma pegged his absence at 10 to 14 days. He said the injury came to light in the last couple of days.

Bylsma wouldn’t reveal the number of exhibition games Eichel will play. He’ll dress for at least one of the first two, then he must earn his action. Spots are available in the fourth, fifth and sixth games, Bylsma said.