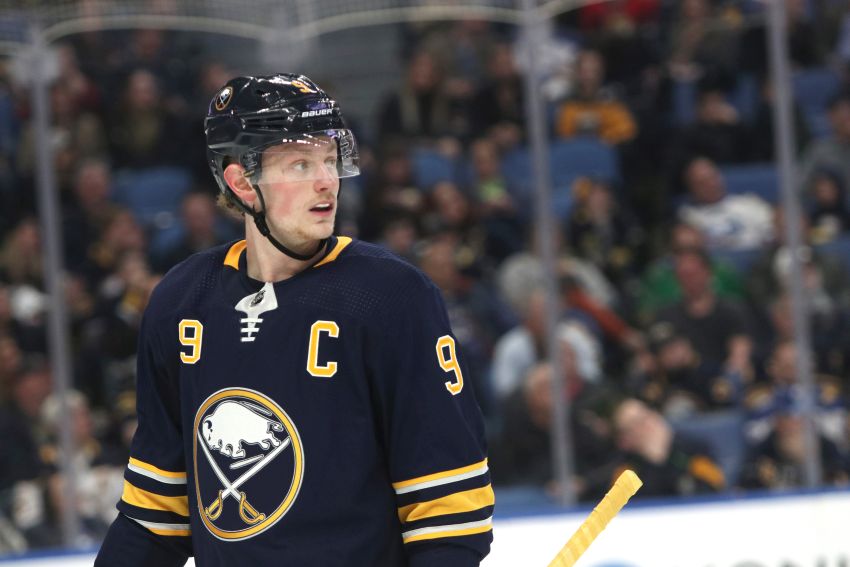 The Sabres have been in a four-month slump. ©2019, Janet Schultz

Not only did they thump an opponent, winger Jason Pominville received a rousing ovation after scoring in what could’ve been his final home game with the Sabres, who close their miserable season tonight against the Red Wings in Detroit.

The salute to one of the franchise’s all-time greats won’t soon be forgotten in these parts.

Good feelings, of course, haven’t surrounded the Sabres much lately.

Since their 10-game winning streak ended Nov. 29, they’ve earned the fewest points in the NHL, just 38, going a putrid 15-33-8 while allowing 199 goals, the league’s highest total.

In their last 25 contests, they’re a wretched 4-18-3. Thursday’s triumph over the Ottawa Senators was their first regulation win since Feb. 23.

Incredibly, the Sabres haven’t won back-to-back games since Dec. 11 and 13.

Now that the Carolina Hurricanes have clinched their first playoff berth since 2009, the Sabres own the NHL’s longest postseason drought at eight years.

“You guys (the media) tend to look at a lot of negatives frequently, myself probably included, with some of the interviews we’ve had in the past month or so,” Sabres captain Jack Eichel said following Thursday’s game.

Well, losing nearly every game usually leads to “negative” questioning. Perhaps Eichel was following up on comments former Sabres goalie Robin Lehner made last week about the “cloud and atmosphere of negativity” in Buffalo.

Eichel, of course, acknowledged “there’s been a lot we need to get better at.”

But the center also tried to accentuate the positives. After winning 11 games at KeyBank Center all of last season, they went 21-15-5 in 2018-19.

“In terms of home ice, you look at our home ice record a year ago to now, it’s obviously improved and it’s something that, as a group, we wanted to get better at,” Eichel said.

He added: “There’s been some exciting nights in this rink this year, for sure. Probably a lot more than there was a year ago. I think if you look at a couple positives, that’s probably one of them.”

True, this season featured more exciting nights. But most of them took place in October and November.

Thanks to a three-point night against Ottawa, Eichel reached 80 points for the first time in his four-year career, becoming the first Sabre to hit the mark since since Pominville and Derek Roy in 2007-08.

“The second half of the year, I think there’s been some ups and downs for me personally and for our group,” Eichel said. “You want to keep getting better every year, I guess. But it’s not really where I want to be or where we want to be, so there’s still a lot to improve on and, for me as a player, still a lot I need to get better at. There’s a lot of steps I need to take.”

Eichel, 22, has scored 28 goals, so he has a chance to crack 30 for the first time. Sabres winger Jeff Skinner has scored 38 times this season.

The Sabres haven’t had two 30-goal scorers in the same year since 2010-11, when Drew Stafford and Thomas Vanek both surpassed the mark.

Notes: The Sabres canceled Friday’s practice. … Sabres goalie Carter Hutton hit the 50-game mark Thursday for the first time in the NHL. If he plays in Detroit, he will tie his professional high for games he set with the AHL Rockford IceHogs in 2012-13. … When the Sabres won their 10th straight game Nov. 27, they led the Red Wings by 13 points. Today, both teams have 74 points.