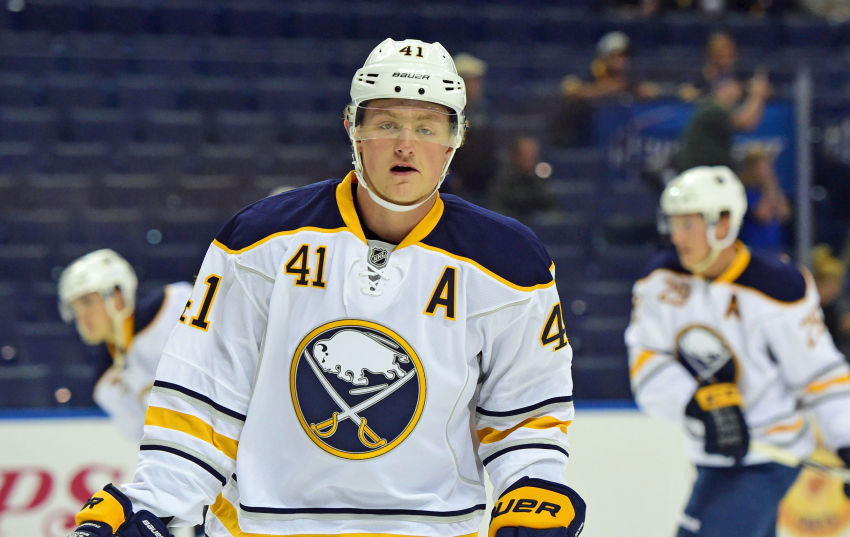 Jack Eichel counts as a veteran for preseason games since he was a first-round pick. ©2015, Dan Hickling, Olean Times Herald

“He’s going to get a chance with the scoreboard running and different colored jerseys in the National Hockey League to play a game,” Sabres coach Dan Bylsma said this afternoon inside the First Niagara Center.

Still, Eichel’s presence is notable. Bylsma said the center will play at least some of the road tilt against the Minnesota Wild between Matt Moulson and Zemgus Girgensons, his linemates early in training camp.

Eichel, as a first-round pick, counts as one of the 10 veterans the Sabres must dress. Much of the lineup will likely comprise AHL players and some neophytes.

“They’ve been through three hard days out there,” Bylsma said. “Right now, it’s not going to be their freshest legs in this game. I’m not looking at this game like, ‘Oh, we’re going to see something,’ or, ‘What’s it going to show us?’ We are looking for how we’re going to play as a team. That’s just in the initial stages of developing.”

Bylsma said Chad Johnson will start in goal and likely be relieved by Nathan Lieuwen. Goalies will likely get two full games each during the preseason.