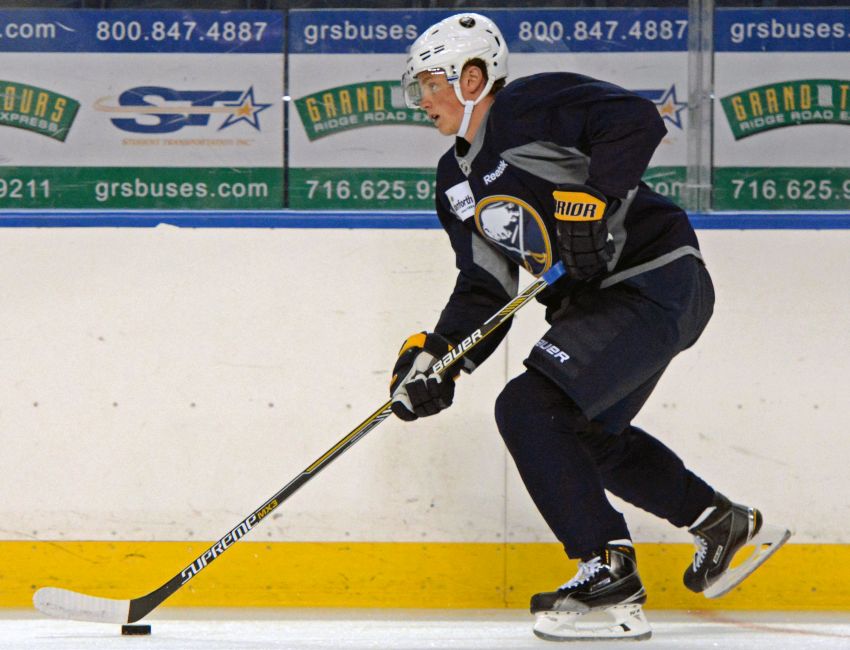 BUFFALO – Jack Eichel had a front-row seat for the commotion surrounding Jimmy Vesey, the college free agent whose negotiating rights the Sabres owned for 57 days.

As the summer wore on, crowds swelled inside the Foxborough, Mass., rink where the two skated as teammates in a recreational league. Media members and TV crews started showing up to interview and film Vesey. Some high-ranking personnel from NHL teams also attended.

“It was starting to blow up,” Eichel said Tuesday following a late-summer skate inside HarborCenter. “It definitely got a little out of control. That’s hockey, that’s the media.”

“Everyone else seemed like they were in his ear,” Eichel said. “I know if I was in his position, I’d want people to leave me alone. It was his decision, and I wanted to make sure he knew I wasn’t going to try to influence him in some way.”

Of course, Eichel, 19, spoke to Vesey, who eventually signed with the New York Rangers on Aug. 19. The two are represented by the same agency. The talented Sabres center told his friend he had an opportunity to join a special organization.

“I talked to him about Buffalo, told him what we had going here, told him how special things are going to be,” Eichel said. “I told him how great it is to play in a town like Buffalo. I gave him my two cents.

Eichel was happy to enjoy a quiet summer following a 24-goal, 56-point rookie season in which he quickly became the face of the franchise and cemented his place as one of the NHL’s young stars.

By April, after playing 81 games, Eichel was ready for a break.

“I definitely needed one, mentally, just to unwind a little bit, reflect on the last 12 months of my life,” Eichel said. “It was important to be able to do that. I’m excited for another season.”

The upcoming season could be a breakout one for Eichel, who improved down the stretch in 2015-16, compiling 15 goals and 40 points in his final 48 games.

Eichel grasped from the get-go his natural talent would only carry him so far. By the winter, he was starting to showcase the sturdy two-way game many NHL stars possess. He said he developed consistency, became “a better a pro” and worked harder throughout games.

“If I didn’t have it offensively one night, maybe it was winning a faceoff or making a play in the D-zone,” he said. “I think that’s important. You know you’re not going to score every night in this league, so there’s going to be those nights where you help your team in some other way. I think I started to learn that. It reflected in terms of points and production when you’re doing the right things.”

Eichel is only back in town for a bit. He leaves Sunday for the World Cup of Hockey training camp. Eichel and Edmonton’s Connor McDavid, the center drafted before him in 2015, are two of the biggest names on the North America Under-23 team, a collection of the best young talent from the United States and Canada.

“It’s something we’ve never done before,” Eichel said. “Usually it’s you play for your country in tournaments like this. I’m sure we’ll put it all aside and be ready to go.”

Eichel, who lived with veteran Sabres winger Matt Moulson as a rookie, plans to live with winger Sam Reinhart this season.

“Should be good,” Eichel said. “Me and him got pretty close last year.”

Sabres defenseman Rasmus Ristolainen, a restricted free agent, doesn’t expect to re-sign before the upcoming World Cup, according to Urheilusanomat, a Finnish newspaper.

“Haven’t heard anything in a while,” Ristolainen told the paper.

Ristolainen, 21, is expected to eventually sign a long-term deal.