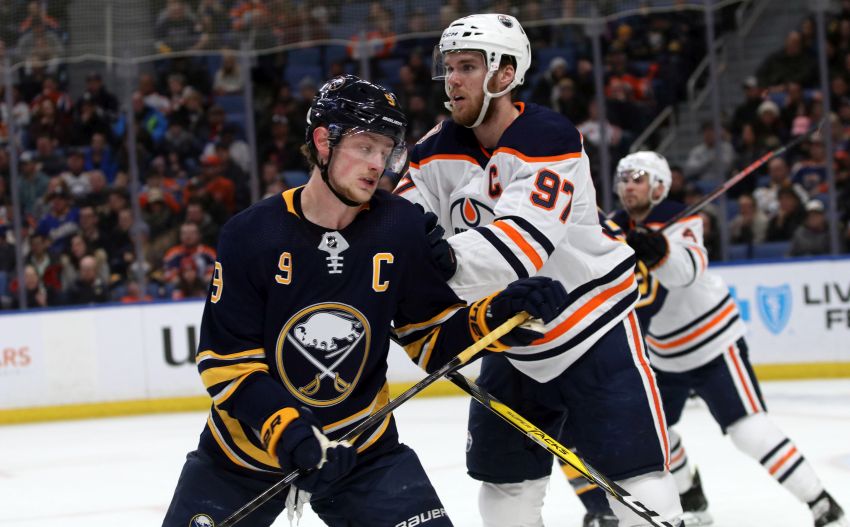 BUFFALO – Phil Housley wouldn’t go there. The Sabres coach simply said he disagreed with the two-game suspension the NHL slapped on center Jack Eichel, his captain and leading scorer, and left it at that.

But an aggravated Eichel offered a detailed description of the illegal check to the head he laid on Avalanche forward Carl Soderberg in Saturday afternoon’s 3-0 loss in Colorado.

The hit, Eichel said Monday, was legal and he shouldn’t have been punished by the NHL Department of Player Safety.

“We have to stand by it, but I don’t agree with it,” Eichel said after the Sabres prepared for tonight’s game against the Dallas Stars at KeyBank Center. “Obviously, if you look at the hit and you look at their rule book, I just didn’t think it matched up. That’s not an illegal hit.”

As Eichel and Soderberg pursued a loose puck in the neutral zone, Eichel cut in front of Soderberg, drilling him in the head with his upper body.

Eichel received a two-minute penalty for an illegal check to the head 14:48 into the second period.

“I don’t move myself to lower it into him,” Eichel explained. “If you watch the hit, he actually is at fault for dropping his head down there. I mean, it’s a 50-50 puck that I’m trying to make a hockey play on. You see me, I have my eyes on the puck the whole time and then I had to make a play on the puck after.

Eichel, who will forfeit $107,526.88 in salary, will miss tonight’s contest and Thursday’s home game against the Pittsburgh Penguins.

While Eichel practiced Monday, he skated as a spare. Based on the line and defense combinations in the session, winger Zemgus Girgensons and defenseman Casey Nelson could be scratched tonight.