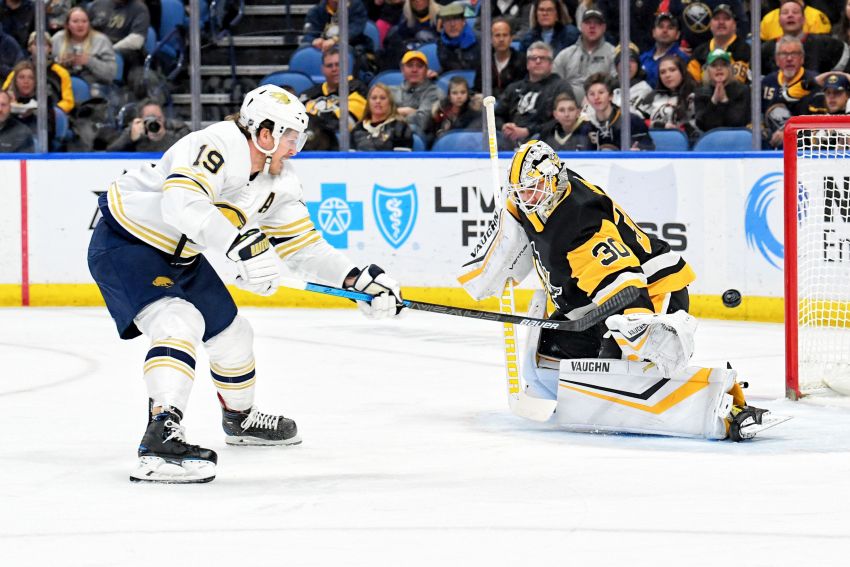 BUFFALO – Having dropped all four games of their recent road trip, the Sabres sealed their fate long before Thursday’s 4-2 loss to the Pittsburgh Penguins.

While the Sabres haven’t officially been eliminated from the playoffs, they will earn their eighth straight DNQ in the coming weeks.

Barely two weeks ago, the Sabres’ slick offense helped them roar back into the playoff race. They scored 23 goals over a six-game stretch, winning five times.

They crept within six points of the Atlantic Division’s final postseason spot. Then they loaded up before the trade deadline, adding wingers Dominik Kahun and Wayne Simmonds.

Since then, however, they’ve lost every game, scoring two goals or less in each outing.

“It’s fighting up a big hill right now,” Sabres coach Ralph Krueger said. “But more than anything, it’s our offensive production that’s causing us the pain. It’s the lack of being able to score on the power play and five-on-five right now with the chances we have.

“What can we do? We have to just keep working. We have to keep creating those chances and look to work for the uglier goals.”

Sabres defenseman Jake McCabe said: “You’ve go to get dirty ones, greasy ones. It’s got to go in off skates, shin pads, rear ends, chest, whatever.”

Eichel, of course, is the Sabres’ offensive catalyst. If the ultra-talented center is struggling, the team likely isn’t winning.

Not surprisingly, his linemates, Victor Olofsson (seven-game drought) and Sam Reinhart (six games) haven’t scored in a long time, either.

Krueger tried to ignite his feeble offense Thursday by switching Eichel’s linemates in the second period, moving Olofsson and Reinhart beside center Johan Larsson and Kyle Okposo and Zemgus Girgensons up with Eichel.

“It’s something you try to do when a group is not firing,” Krueger said of the changes. “We had some amazing shifts there in the middle of the second period where there was so much opportunity and something going in there would have done a lot for the changes we made.”

They outplayed the Penguins in the second period, outshooting them 10-3. Still, the Penguins outscored them 1-0 and the Sabres ended the period trailing 3-1.

The Sabres fell behind 1-0 7:56 into the game when Penguins winger Nick Bjugstad steamrolled goalie Jonas Johansson in his crease, allowing linemate Patric Hornqvist to score.

Officials allowed the goal to stand, and following a video review for goaltender interference, it was ruled McCabe and Sabres center Curtis Lazar pushed Bjugstad into Johansson.

The Sabres portion of the bipartisan crowd of 18,236 inside KeyBank Center howled in disgust when it was announced the goal counted.

“I was quite stunned,” Krueger said of the goal standing. “I mean, we reviewed it about six times and they’re claiming that we knocked him in but there was a normal altercation. It looks like his hands are out in front of him.

“But … we needed to recover. We did and just didn’t do enough after.”

Johansson said of the goal: “It happened so fast. “So right in the moment, I really didn’t understand what was happening. But … there’s only so much you can control as a goalie. … So if the ref says it’s a goal, I trust him in that.”

The Sabres, who were outshot 11-0 early, tied the game, though. McCabe scored on a short-handed breakaway – they had to kill a delay of game penalty for losing the challenge – at 9:01.

But defenseman Marcus Pettersson scored later in the period, putting the Penguins up for good.

“I was trying to be patient and wait, see if there’s a pass or he’s going to shoot it, and then he obviously has a really good backhand,” said Johansson, who made 28 saves in his sixth NHL appearance. “So he beat me there clean. So I got to give that to him, that was a good shot. Now I know it for next time.”