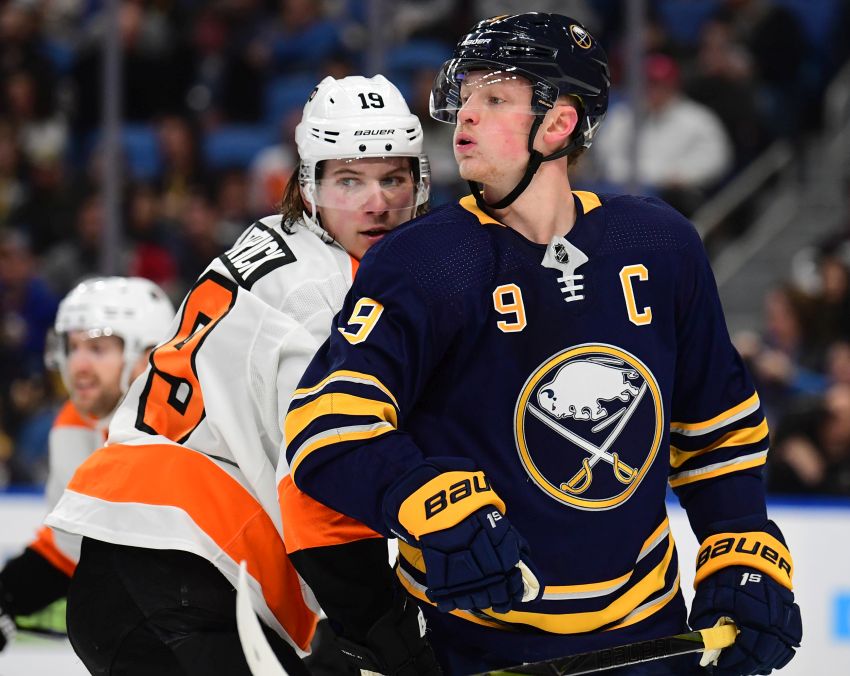 BUFFALO – The 10-game winning streak that vaulted the Sabres to the top of the NHL is starting to feel like a distant memory.

Perhaps rattling off so many victories changed the Sabres, an inexperienced club that hadn’t handled any success in the past. Maybe they’re simply not that good.

Remember, the Sabres won nine one-goal contests during their run. They have little margin for error in an ultra-tight league.

“We’ve got to realize we haven’t earned anything in this league,” said captain Jack Eichel, whose two first-period goals put the Sabres up early. “Just because we won a couple games doesn’t mean we’re just going to put our skates on and go out there and win.”

Saturday’s wretched effort over the final 40 minutes officially made the losing streak worrisome. The Flyers, a team with 11 fewer points than the Sabres and a new general manager, scored six unanswered goals, including four in the third period.

“The streak we were on, that’s over,” Eichel said. “It means nothing now. Now I think we’re losing sight of what’s made us successful. We hadn’t worked, really, and that’s a prime example. I thought they just outworked us for 40 minutes and that’s why the game ended up 6-2.

“It’s frustrating. You get a couple days off, you’re able to rest, regroup and you’re playing a game at home, and that’s the product we put on the ice. It’s not good enough.”

Sabres coach Phil Housley said: “It was a stinker.”

Some’of the Sabres recent defeats could be brushed off. They started their skid by losing four one-goal games, two in overtime. The league’s three best teams – the Tampa Bay Lightning, Nashville Predators and Toronto Maple Leafs – defeated them.

“We had an opportunity to seal the game, if you will,” said Housley, who credited goalie Anthony Stolarz for keeping the Flyers in the contest.

The Sabres probably started thinking back to the 4-0 first-period lead they opened up in their last meeting.

“Once we got to two goals, we thought it was going to be an easy game and we stopped checking,” Housley said.

Eichel said the Sabres “can’t just expect to go out and win.”

“That’s the biggest lesson we’ve got to learn here,” the center said. “It takes a lot of hard work, shift after shift, just doing the right things. If you don’t make a huge play on your shift, at least win a battle, do something. It’s important.

“I think we’ve gotten away from it and we need to get back to what made us successful.”

Despite a poor second period, the Sabres stayed in the game, mostly thanks to goalie Linus Ullmark, who made a few huge saves.

When Travis Sanheim went off for holding the stick 2:15 into the third period, the Sabres had an opportunity to take the lead or at least generate momentum.

“That really took the wind out of our sails at that point,” Housley said.

Then the Flyers began pummeling the Sabres, scoring three times in 2:50.

“We didn’t check right to the end, and we sort of left them out there, especially the fourth, fifth and sixth goals,” Housley said. “That was tough.”

Before the game, Housley warned his team after the last visit here, the Flyers would have their horns up.

“I know it didn’t look that way in the first, but it’s a 60-minute game there and we didn’t stay true to what’s made us successful,” Housley said. “We’re a hard-checking team, and we got away from that. We wanted to be fancy. We didn’t make the right decisions.

“When we do that we’re not a very good team. We’re very average.”

Ullmark said: “We just have to keep looking forward instead of looking backwards. Whatever happens, happens. You can’t cry over spilled milk.”