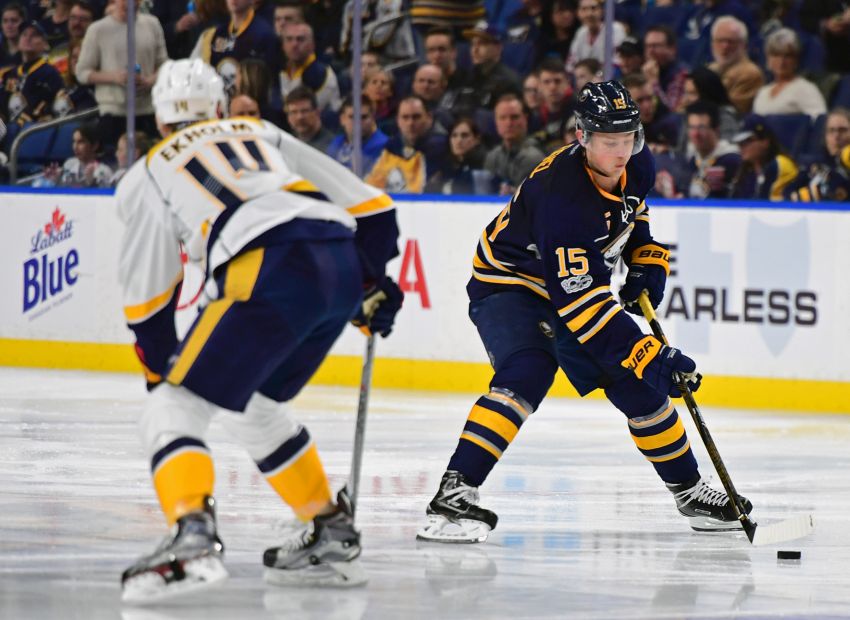 BUFFALO – Before today’s trade deadline hits, before the reeling Sabres sell off assets, they imploded again Tuesday, illustrating why they’ll soon complete their sixth straight season without a playoff appearance.

Up 4-2 against the Nashville Predators late before 18,634 fans inside KeyBank Center, the Sabres frittered away a two-goal lead third-period lead for the second straight game, losing 5-4 in overtime.

Thanks to four straight losses, the Sabres are six points out of the last wild card spot and nine out of the Atlantic Division’s final spot.

They’re playing for pride over the final 19 games. That’s why the Sabres could have a much different look after the 3 p.m. deadline passes.

“(The) deadline’s not a fun thing when you’re in a position like we are,” Sabres winger Kyle Okposo said. “We had a chance a few days ago to right a different course, weren’t able to do that.

“This one stings. I haven’t been a part of a team that’s been like that. I’ve always known if we’re going to be buyers or sellers.”

Make no mistake, the Sabres are sellers. Wretched road losses to Colorado and Arizona, the NHL’s two worst teams, kicked them out of the race over the weekend.

In Sunday’s 3-2 loss to the Coyotes, they allowed three straight third-period goals. In Tuesday’s loss, they also blew a 2-0 second-period lead.

After the Sabres generated several chances on an overtime power play, Filip Forsberg scored the winner at 2:45. Forsberg also scored the tying goal 17:37 into the third period, giving him a stunning 10 goals in the last five contests.

Clearly, the Sabres have run out of answers for their woes.

“It’s the same thing,” said defenseman Jake McCabe, whose goal 57 seconds into the third period put the Sabres up 4-2. “It’s almost like a broken record coming in here and saying that. … We say the right things, but it comes to the point where you got to go out and execute.”

Captain Brian Gionta, who possibly played his last game with the Sabres, said some of the struggles come from “being fragile.”

“It’s being a young team trying to find our way,” he said. “When we’ve got those leads, we can’t sit back.”

But they continually do, taking their foot off the gas.

The Sabres had total control early, going up 2-0 after Gionta and Okposo scored.

“We established a forecheck and put a lot of pressure on them,” Sabres coach Dan Bylsma said. “I thought that was one of our better periods of hockey coming out of the gates.”

But Mike Fisher scored late in the first period, and Colin Wilson tied it 2:09 into the second.

“Tonight was just more of us not continuing to do what made us successful,” Okposo said. “We just need to move our feet. We had so many good shifts in the offensive zone in the first period, and then after that it just seemed to kind of die.

“We were just one-and-done or none-and-done. We just kind of sat back and let them have at it. If you give a good team that much time and that much space, they’re going to make you pay.”

It appeared Sabres goalie Linus Ullmark might start his first NHL game since April 9, but Lehner, who sat out Sunday, was healthy enough to start his 44th contest.

“They ran me a couple of times in Colorado, and in the second period (Tyson) Barrie hits me with a pretty big hit right in the head, blindsided me pretty much,” Lehner said Tuesday morning. “So I got some small symptoms but it was all neck related and I passed all my testing. So I’m happy it was nothing bad.”

2 thoughts on “Sabres implode late, lose to Predators in OT”