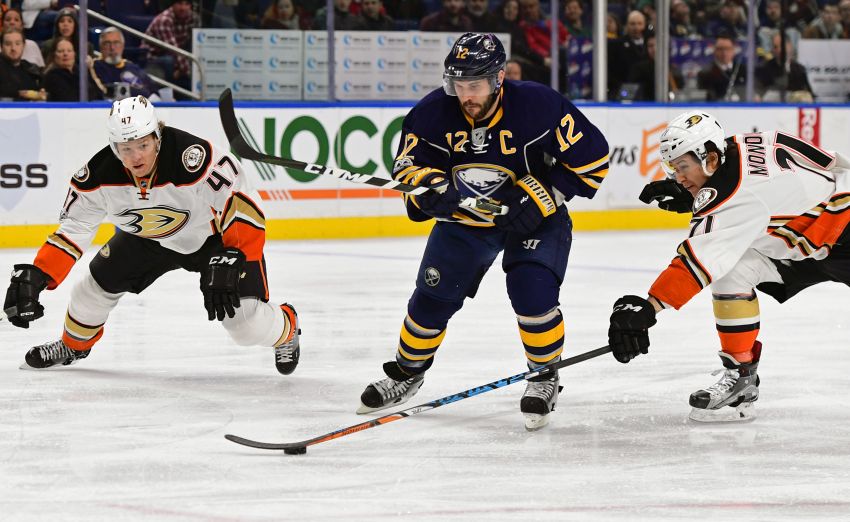 BUFFALO – There was no roaring comeback or a big last-second push. Instead, the Sabres, fresh off a rollicking come-from-behind win, imploded late in Thursday’s ugly 5-2 loss to the Anaheim Ducks, allowing four goals after beginning the third period tied.

“We had the game right there 1-1,” Sabres goalie Robin Lehner said. “It’s disappointing.”

So much for carrying some momentum from Tuesday’s 5-4 overtime victory against San Jose, a game in which the Sabres scored three third-period goals to tie it.

Against the Ducks, a Western Conference heavyweight, the Sabres continued a disturbing trend, giving up 44 shots, the ninth straight contest they’ve allowed 35 or more. The Ducks outshot them 14-8 in third period.

“We got to expect more out of ourselves going in at this stage of the season, that stage of the game,” Lehner said. “(It’s a) 1-1 hockey game. We didn’t have a push. They had a push.”

The Ducks’ push started when a wide-open Rickard Rakell broke the tie 55 seconds into the period from the left side of the net.

“They come up the ice with a lot of speed,” Sabres coach Dan Bylsma said. “We were half on a change and they were attacking our defensemen with a ton of speed.”

With Ryan O’Reilly off four minutes for high-sticking, Antoine Vermette made it 3-1 at 5:46. Corey Perry, a former 50-goal man, scored his second of the night and just his 11th this season to seal the game at 10:11.

Apparently, the 18,027 fans inside KeyBank Center weren’t counting on another comeback. After the Ducks opened up a three-goal lead, the building emptied out.

“Comeback victories (are a) great momentum boost, moral boost – whatever,” Lehner said. “But comeback victories are comebacks because we’ve put (ourselves) in a hole. It’s not all the time going to bounce that way.”

For more than two years, even through some of the Sabres’ darkest days, a visit from a Pacific Division opponent has usually meant a win.

The Sabres began Thursday 13-0-3 in their last 16 home games against Pacific teams. Incredibly, they hadn’t lost to one here since falling to Edmonton Nov. 7, 2014.

Gibson had just returned to the game after a skate problem forced Jonathan Bernier to play for almost six minutes.

The Sabres didn’t score again until Rasmus Ristolainen narrowed it to 4-2 late in the third, the defenseman’s first goal since Dec. 20, a 23-game stretch. Williamsville’s Justin Bailey recorded his first NHL assist and second point on the goal.

“Just overall, not a very effort from us tonight,” Eichel said. “More than anything, it’s just the little things – making passes, executing. We just weren’t very sharp at all.”

He added: “We gave the puck up a little too easy here. It’s so hard to get it. When you get it, you need to possess it. I think we were just kind of shooting it around. That’s what happens. You play a good team, don’t possess the puck and it winds up in the back of the net.”

“At the end of the day, there’s some key parts of our game that we got to work on, like giving up 40-plus shots every game,” Lehner said.