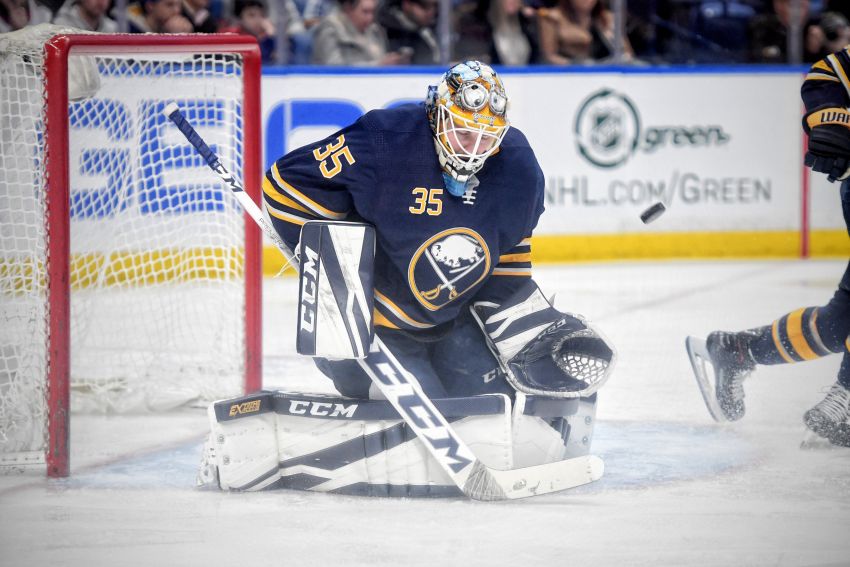 TORONTO – Following a three-year AHL apprenticeship, the Sabres expect goalie Linus Ullmark to play around 30 games this season as their new backup.

So watching the Maple Leafs score on their first two shots and three of their first eight in the opening 3:42 of Friday’s preseason tilt had to be concerning.

Then Ullmark, 25, settled down nicely after the Sabres, who opened the scoring 30 seconds in, fell behind 3-1. Over the final 50 minutes or so, the Swede looked sharp, making some strong saves and allowing the Sabres to tie the game.

Still, it wasn’t enough, as the Leafs beat a Sabres squad comprised mostly of youngsters and AHL players 5-3 in front 18,833 fans inside Scotiabank Arena.

“I love the way we responded,” Sabres coach Phil Housley said. “We were facing some big-time adversity there when it was 3-1. Our guys came back, got that period back.”

He added: “I thought our compete, our effort, our conditioning is right where it needs to be. Give them credit, they scored some opportunistic goals. But even saying that, Linus makes a couple huge saves for us to keep it at one.”

Ullmark finished with 27 saves. What helped him settle in?

“Nothing really, just watching the puck,” Ullmark said. “I don’t really care about what’s happened. It’s just about focusing on what’s next.”

Goals from wingers C.J. Smith and Tage Thompson helped the Sabres tie it. Then West Seneca’s Chris Mueller, a top player for Toronto’s AHL team, the Marlies, scored the winner 10:55 into the second period.

Star John Tavares, who played his first home game, scored early for the Leafs and added an empty-netter. Ron Hainsey and Pierre Engvall scored the other goals.

The Sabres fell to 1-2 this preseason.

Since a slew of talented youngsters, including first overall pick Rasmus Dahlin, are among the 49 players left in training camp, some rookies get a bit overlooked.

Take, for example, winger Andrew Oglevie, a free agent the Sabres signed out of Notre Dame earlier this year.

Oglevie, 23, scored a similar goal in Monday’s 4-1 win in Columbus.

What has helped Oglevie stand out? Getting to the net.

“I just really like the way he’s playing,” Housley said. “He’s finding the holes, he’s got a good knack of knowing where the puck’s going to be.”

Oglevie said: “Good things happen when you go to the blue paint. I’m trying to get there and get my stick on some pucks that are laying around.”

The Sabres waived winger Matt Moulson on Friday. Assuming the veteran clears today – given he is owed $2 million in 2018-19, the final season of his five-year, $25 million contract, he should – they will likely assign him to an AHL team.

After the Sabres waived Moulson early last season, they sent him to the Ontario Reign, the Los Angeles Kings’ AHL affiliate. The Sabres did not want Moulson taking ice time away from their prospects with the Rochester Americans.

Moulson, 34, is not in training camp with the Sabres.

The three-time 30-goal scorer had zero goals in 14 games with the Sabres last season. However, he thrived back in the AHL, compiling 18 goals and 46 points in 48 contests.

The trio, which was on the ice for two of the Leafs’ first three goals, lasted just a few minutes together.

On Friday morning, Housley said he was only concerned about the line’s checking, especially if they faced Tavares, who would score against the trio hours later.

Leafs coach Mike Babcock on the Sabres: “They should be a good team. I’ve known (Sabres general manager Jason Botterill) for a long time, he’s a good man, a good hockey man and he’ll fix things there over time.”

Many of the Sabres’ biggest names – Dahlin, center Jack Eichel, defenseman Rasmus Ristolainen and others – are expected to play in tonight’s tilt against the Leafs at KeyBank Center.