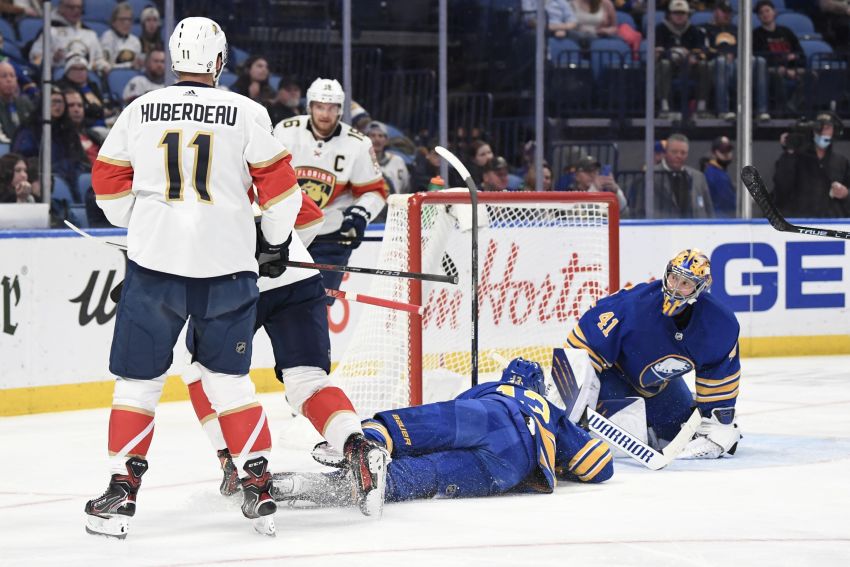 Despite outplaying the Panthers early, the Sabres trailed 1-0 after the opening period. The Sabres had an opportunity to exploit one of the NHL’s heavyweights, but they couldn’t get any of their 11 shots by Panthers goalie Spencer Knight.

“Being down 1-0, that hurts when you only give up three,” winger Kyle Okposo said following the Sabres’ 6-1 loss to the Panthers before 7,906 fans at KeyBank Center.

It started hurting a whole lot more after that first period. In an utterly dominant second-period performance, the Panthers throttled the Sabres, scoring four times and pumping 20 shots on goalie Craig Anderson.

The Sabres imploded, allowing the league’s highest-scoring team to capitalize on every mistake.

“Just breakdowns,” Okposo said of what doomed the Sabres. “It seemed like every puck is going through and just didn’t do a good enough job staying on top of them. Obviously, they got a ton of skill. I thought that they were a little sloppy in the first and a little bit, it seemed like, just a little slow.

“And then they came out in the second and they just used their skill, to be honest with you, and they made some really nice plays and we just couldn’t stop the breakdowns from happening. Left Andy out to dry a little bit.”

On some nifty goals by the Panthers, the Sabres looked they were standing around.

“The second we gave up too much time and space, we responded with hesitation, a little bit of fear maybe and that caused hesitation, the fear not to make a mistake,” Sabres coach Don Granato said. “You give skill players and a team like that that little bit of extra, too much respect, they can make you look foolish at times. I felt that was a big part of it. Big part of it.”

The Panthers might possess the deepest lineup in the league, and they attack their opponents in waves.

“That team doesn’t stop,” Granato said. “They have skill on all lines, all four lines and all three sets of D, they have skill. So. if you’re off by that little margin, it’s going to accumulate over 60 minutes with that team. That’s what they do to everybody.”

The Sabres, who lost 3-0 to the Los Angeles Kings on Sunday afternoon, hadn’t scored since late in the third period Friday.

Okposo wants to the Sabres, who have today off, to regroup and “not turn the page” when they return to practice Wednesday.

“There’s absolutely a component that you have to let go of the – I think when you say that, you (mean) the negative of it,” Granato said. “I think you have to remember the lesson within it and that you don’t let go of. I’ve already looked at the calendar and see that we play them two more times. … I’ll remind our guys of this game and it’s a measuring stick for us.”

One thought on “Sabres implode against Panthers, lose big: ‘That team doesn’t stop’”